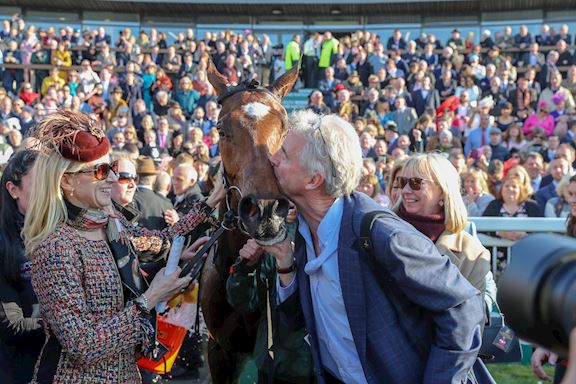 Tiger Roll's owner Michael O'Leary in the press conference following the Randox Health Grand National.
"It really feels like an out-of-body experience. Last year was a wonderful surprise, but this year there was no pressure at all, frankly I didn't think he had any chance of winning having gone up in the weights to 11 stone five pounds. I was much more worried that he would come back safely - he has got to the stage that I get more nervous watching him than I do of any of the other horses, less anything happens to him.
"The bizarre thing is that it seemed to be an easier, more comfortable ride and a better win than last year; he always seemed to be in the right place, he stumbled twice, and four from home that woke him up. There was never a moment's worry, it was bizarre.
"You grew up as a kid in Ireland and the race you first become aware of is the Grand National, it is not the Gold Cup. We all had our first bet on the Grand National, I went into a bookmaker's shop to put a bet on the Grand National without my mother knowing! To win once is a dream come true, to win three times is Trevor Hemmings-esque. I hope Trevor wins it next year and takes the score to four-three!"
"Running Tiger Roll in the Grand National today was not a certainty. As you know he is not a big horse and he has gone up nine pounds in the handicap - if the ground had been soft today or Anibale Fly had come out we would not have run. I was asked outside if he will come back for the hat-trick and I think probably not - he will get another eight or nine pounds from the Cheltenham Cross Country win, he could be humping 12 stone [11 stone 10 pounds is the highest allotted weight] around here next year, I think it will be unlikely. Much more likely, if he is fit and well, we'll aim him for the Cross Country at Cheltenham. If he could win that for a third time, I think we'll retire him.
"He'll be entered here, but he will be so heavily weighted - Red Rum won three times, but I don't want to bring him back carrying 12 stone.
"Is he the best purchase I have every made? I was asked that outside, but I was standing by my wife so I said, 'Yes after the engagement ring!' He is probably the second-best purchase I have ever made in my life.
"Eddie my brother buys these horses and you look across the record he has over the last ten years - we've won two Gold Cups, three Grand Nationals, four Irish Grand Nationals, my brother is a genius, the clever one in the family at identifying these horses. All I have to do is write the cheques, which is straightforward. Eddie is delivering incredible success.
"But money couldn't buy you days like this, it can't buy you experiences like this - I have four children at home jumping up and down on the sofa cheering on Tiger Roll.
"When I was a child growing up I never dreamed you could own horses like Tiger Roll, the Irish didn't have runners in the Grand National in the 60s and 70s, and now we are not just entering it, we are winning it as well.
"We are not tempted by the Gold Cup - he is a small horse, the Gold Cup is such an attritional race. He has won four times at Cheltenham, and if he were to go back and win five times at Cheltenham - what more do you want from the horse? I think at that stage I would mind every precious hair in his body.
"The Ryanair flight home last year ran 30 minutes late and there was a free bar on board - it will probably run another 30 minutes late again today and there will be another free bar on board. If the cost of winning the Grand National each year is a free bar on board on the flight from Liverpool to Dublin, it is money well spent!
"You look at the team we have - Eddie has a phenomenal record, he is buying very young horses and he makes silk purses out of sow's ears. We first came across Gordon after he won the Grand National with Silver Birch and we thought who the hell is he? He also comes from County Meath and we are from Westmeath, and the people from Meath kinda look down on us as we are the poor peasants!
"There is a lot of criticism in racing of the big trainers and the big owners, and the answer I make all the time is Gordon Elliott. He started off with nothing, he has built an incredible training career (though he is too young to have a career!), an incredible training operation with nothing, only the sweat of his back. He didn't have a background in racing, and he has built the second-most powerful training operation in Ireland behind Willie Mullins - you are still second behind Willie, but you get getting closer and closer!
"His record at Cheltenham, at Liverpool, he is an incredibly talented trainer and he is the answer to everyone else who says you need to have luck, or relations or money - proves you just need to work incredibly hard, which is what he does and he delivers extraordinary results.
"He also throws very good parties at Summerhill in County Meath and there will be one there tomorrow afternoon at about 2pm!" 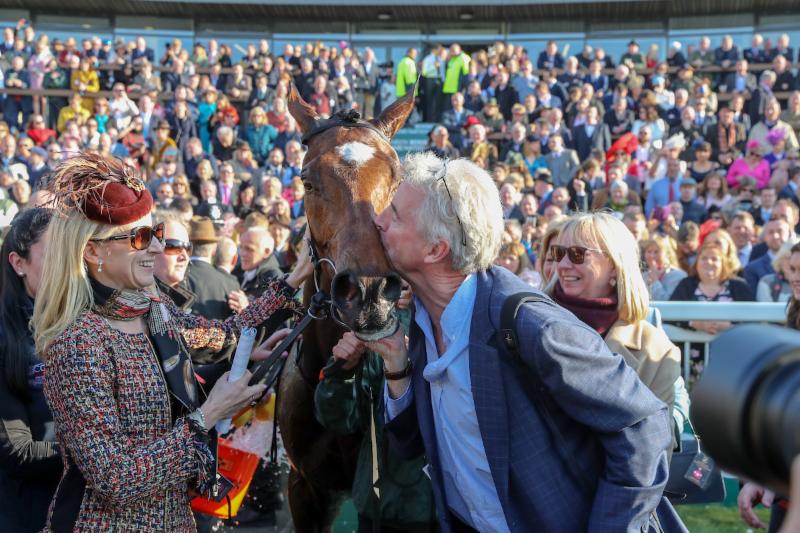 FACTS AND FIGURES FOLLOWING TIGER ROLL'S VICTORY
Tiger Roll is the fourth shortest-priced favourite ever to win the Grand National at 4/1. He is the shortest-priced winning favourite since Poethlyn in 1919, who started at 11/4.
Tiger Roll became the 27th winner of the Randox Health Grand National to be trained in Ireland and he led home an Irish 1-2-3. However, this did not quite match the 2018 finish, which saw an unprecedented 1-2-3-4 for Irish-trained horses.
Tiger Roll is the fifth back-to-back winner of the Grand National following Abd-El-Kader (1850 and 1851), The Colonel (1869 and 1870), Reynoldstown (1935 and 1936) and Red Rum (1973 and 1974). Three others have won the race twice, namely Peter Simple (1849 and 1853), The Lamb (1868 and 1871) and Manifesto (1897 and 1899).
Gordon Elliott has become the eighth trainer in Grand National history to saddle three winners of the great race. The most recent trainer to have achieved this was the late Tim Forster who saddled the winners in 1972 (Well To Do), 1980 (Ben Nevis) and 1985 (Last Suspect).
Davy Russell has now won two Randox Health Grand Nationals in succession on Tiger Roll. He is the first jockey to do this since Leighton Aspell scored on Pineau De Re in 2014 and Many Clouds in 2015.
Davy Russell at 39 is one of the oldest riders to capture the Grand National in the race's history. The oldest was 48-year-old amateur Dick Saunders on Grittar in 1982.
Tiger Roll became the 46th nine-year-old - the most successful age group - in the 172 runnings of the Grand National where the winner's age was recorded.
Tiger Roll carried the third joint-highest weight to victory in the last 22 runnings, with his 11st 5lb emulated by Don't Push it in 2010 and beaten by Neptune Collonges (2012, 11st 6lb) and Many Clouds (2015, 11st 9lb).
Gigginstown House Stud are now the joint most successful Grand National winning owners ever with three winners: Rule The World (2016) and Tiger Roll (2018 and 2019). Four other entities have won three Grand Nationals, most recently Noel Le Mare (Red Rum 1973, 1974 and 1977) and Trevor Hemmings (Hedgehunter 2005, Ballabriggs 2011 and Many Clouds 2015).
This was the 172nd running of the Randox Health Grand National, and for the 17th year in a row a sell-out crowd of 70,000 was witness to it.