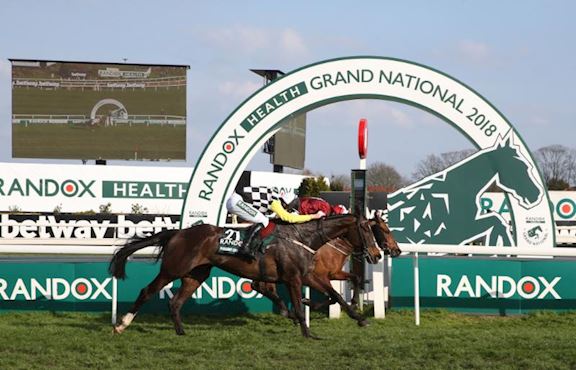 Randox Health Grand National - the 40 declared runners today
The four reserves will be known later this morning
Grade 3 handicap chase, £1 million total prize fund. Aintree, 5.15pm Saturday, April 6, 2019. 4m 2f 74y over the Grand National fences. For seven-year-olds and upwards who, prior to March 19 have started in a steeple chase during the current season and been placed first, second, third or fourth in a chase with an official distance description of two miles seven and a half furlongs' or more at any time during the horse's career, Horses must also be allotted a rating of 125 or more by the BHA Head of Handicapping following a review of the horses entered and after taking account of races run up to and including February 10. Horses who are not qualified for a rating in Great Britain or Ireland at closing may also be entered. Such horses may be eligible for a weight providing the Handicapper is satisfied that the horse's racecourse performances up to and including February 10 would merit a minimum rating of 125. To qualify, horses must have run at least three times in chases run under the Rules of Racing of the same Recognised Racing Authority up to and including February 10. At the Handicapper's discretion, such horses may be allocated a rating. The decision of the BHA Head of Handicapping shall be final. Entries closes January 29, entries revealed January 30 (112 entries - 2 not qualified), weights revealed February 12, first scratchings deadline February 26 (100 remained), second scratchings deadline March 19 (84 remained - 3 not-qualified, 2 subsequently scratched), five-day confirmations April 1 (69 confirmations, 1 subsequently scratched - Sandymount Duke), final declarations 10am April 4.g Maximum field of 40 plus four reserves.Weight Raised 4lb on Monday, April 1First rating given is at the weights' launch on February 12, followed by the current rating with the difference in brackets. Horses run off of the weights they were allotted on February 12, with no penalties.
40 runners
21 Irish-trained
SANDYMOUNT DUKE & PAIROFBROWNEYES TAKEN OUT