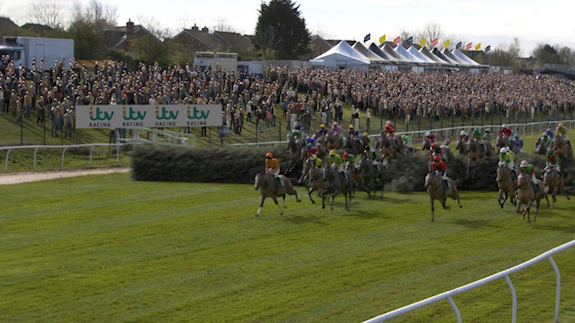 Tiger Roll is set to defend his unique position as the first ever horse to do the 'double' by winning The Virtual Grand National and hours later claiming victory in The Randox Health Grand National, both at Aintree and both over the most famous jumps on the planet.
The 'Tiger' claimed success in the 2018 races in almost identical circumstances - a close finish on the virtual outing, driven by sophisticated CGI technology and algorithms - and then in a dramatic photo finish on Grand National Day.
'The result was unbelievable' said Virtual Race commentator Stewart Machin, who will return for a third year running to call the 2019 Virtual Grand National on ITV;
'Is this every punters dream - to tell the world hours in advance who will win?'
'The winner of the first ever Virtual Grand National, Cause of Causes in 2017, came second in the real race hours later and almost won both races, but Tiger Roll was exceptional in the real and virtual worlds and it was uncanny how close the computer came to getting the finish so correct'.
'We're now keen to see if the simulation can continue its remarkable run fora third year straight and attempt to show the experts how it's done once again'
Nick Luck once again hosts the sixty-minute special from the innovative Carm Productions led by former Granada Executive Rob McLoughlin.
The broadcast will also feature The Grand National Race of Champions as 40 legends of the past compete over Becher's Brook, The Canal Turn and Valentine's in a race which could only happen in the virtual world.
The field features favourites or joint favourites - a position - which doesn't always guarantee success and will include the Aintree favourite Red Rum beaten in last year's battle by L'Escargot.
The Virtual Grand National and Race of Champions have been developed with Inspired Entertainment's Manchester based animation team. They use past form, the views of a panel of experts and the going and weather conditions to assess the likely outcome, but the computer makes the final decisions.
'Last year's result was breathtaking' said Steve Rogers of Inspired, 'We were in disbelief for days afterwards. The races stand out on their own as sport and entertainment even without the extra ingredient of attempting to tell the nation where their favourite may finish.'
'In 2017 the algorithm came up with six of the top ten finishers and the runner-up in the real race won The Virtual Grand National. In 2018 it selected six of only 12 finishers and the winner'.
Richard Pitman, Aintree personality and near-winner on Crisp, will be alongside Alice Plunkett of ITV Racing as Nick Luck guides viewers through this unique TV format.
The 2019 Panel of Experts includes Bob Champion who famously won on Aldaniti, winning trainer Lucinda Russell, winning jockey Liam Treadwell and Lydia Hislop, who has pitted her knowledge against the computer for the past three years.
The broadcast music legend (TOTP, The White Room; The Tube; Bowie at the Beeb) Chris Cowey directs for the third year with award winning Mark Alderton producing.
Creator of the concept Rob McLoughlin (VGN created with Inspired Entertainment) is Executive Producer with John Moulson and Peter Eaton, whose family won the 2004 Grand National with Amberleigh House, is the Programme Consultant.
For more information on how Tiger Roll won and to see a background video on the 'science' please follow this link to the Aintree website:
FOR DETAILS OF THE VIRTUAL GRAND NATIONAL 2019 FROM AINTREE WEBSITE, PLEASE CLICK HERE