Tiger Roll and stablemate Delta Work, with respective ratings of 170, have been allotted top weight of 11st 10lb for the 2020 Randox Health Grand National at Aintree on Saturday, 4 April, details of which are revealed today. 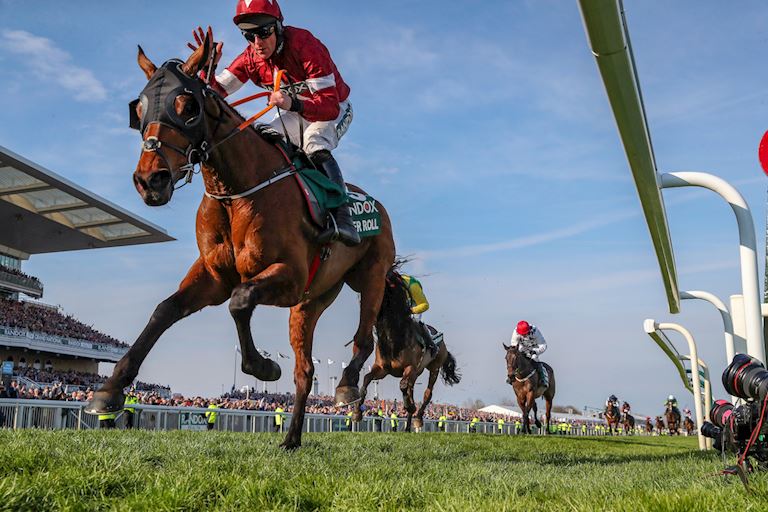 The 10-year-old had an official rating of 150 in the 2018 Randox Health Grand National and defied a rating of 159 in last year’s edition.

Delta Work, who like Tiger Roll is owned by Gigginstown House Stud and trained by Gordon Elliott, is among the leading contenders for the G1 Magners Cheltenham Gold Cup, following his victory in the G1 Irish Gold Cup at Leopardstown on 2 February.

Elliott has 18 entries in total, more than any other trainer, as he chases a record equalling fourth Grand National, with his team also featuring promising novice Champagne Classic (10st 6lb) and 2019 Galway Plate victor Borice (10st).

Fourth-placed Walk In The Mill (Robert Walford, 10st 4lb) fared best of the British-trained runners in 2019. He continued his excellent record over the famous fences by winning the Randox Health Becher Handicap Chase for the second successive year in December.

The 2017 victor One For Arthur (Lucinda Russell, 10st 2lb) is the other previous Grand National winner among the entries. His rating of 148 is the same as he carried in 2017.

“This decision was made essentially on two factors – historical compression which was brought in by Phil Smith and has been used for the last 10 years or so. On the other hand, I have to give Tiger Roll this mark based on his efforts over the national fences at Aintree where he is of course unbeaten.

"Tiger Roll was rated 172 at the end of last year and obviously there is no recent evidence to go on because of his fitness issues, so his handicap mark has been unquantifiable since. He is therefore coming down 2lb and carries the same weight as Suny Bay did when he was second in the 1998 Grand National. No other horse has carried that rating since. Many Clouds won off 11st 9lb, but he did not have as high a rating.

"It must be remembered that Tiger Roll ran in the race off a rating of 159 but was actually rated 167 at the time due to his win in the Cross Country at Cheltenham.

"Tiger Roll has also not yet qualified for this year’s Grand National. Whilst he may run in the Boyne Hurdle at Navan (Sunday, 14 February), he still has to run in a chase to qualify. There are about 15 horses overall who currently do not qualify because they have either not run over fences this season or not yet finished in the first four in a race over 23 and a half furlongs in their career. A high-profile example would be Cadmium, a Topham Chase winner.

"Delta Work is a potential Cheltenham Gold Cup contender and, in order to keep as many of the horses in the handicap, he is also off 170. Other horses towards the top include Bristol de Mai and Native River. Bristol de Mai was rated 173 when entered last year and that figure has been downgraded since to 168. I have dropped Native River 2lb to 166 as Bristol De Mai has finished in front of him the last couple of times they have met, and I thought he was workmanlike when winning at Newbury on Saturday.

"This year, 73% of the horses entered are in the handicap. Similarly, from a starting rating of 140, there are more horses than ever in the modern era entered for the race - 92 in total.

"The race is full of top-class individuals and boasts the winners of races such as the Grand National, Irish National, Welsh National, Rowland Meyrick Chase, Cheltenham Gold Cup and much more. It is as good a staying handicap as would be run anywhere.

"You could argue that it is the highest quality Grand National in modern history.”

Grade 3 handicap chase, £1 million total prize fund. Aintree, 5.15pm Saturday, April 4, 2020. 4m 2f 74yds over the Grand National fences. For seven-year-olds and upwards who, prior to March 17, have started in a chase during the current season and been placed first, second, third or fourth in a chase with an official distance description of' two miles seven and a half furlongs' or more at any time during the horse's career. Horses must also be allotted a rating of 125 or more by the BHA Head of Handicapping following a review of the horses entered and after taking account of races run up to and including February 9. Horses which are not qualified for a rating in Great Britain or Ireland at closing may also be entered. Such horses may be eligible for a weight providing the Handicapper is satisfied that the horse's racecourse performances up to and including February 9 would merit a minimum rating of 125. To qualify, horses must have run at least three times in chases run under the Rules of Racing of the same Recognised Racing Authority up to and including February 10. At the Handicapper's discretion, such horses may be allocated a rating. The decision of the BHA Head of Handicapping shall be final. Entries closes January 29 (105 entries, 2 subsequently scratched), weights revealed February 11, first scratchings deadline February 25, second scratchings deadline March 17, five-day confirmations March 30, final declarations 10am April 2. Maximum field of 40 plus four reserves.