Bookmaker William Hill will be sponsoring the only two races to take place over the Grand National fences outside of the Randox Health Grand National Festival. William Hill also generously extends its support to the other five races over the Mildmay Course on Becher Chase Day, which includes the £50,000 G2 William Hill Many Clouds Chase.

The William Hill Becher Handicap Chase takes place over just short of three and a quarter miles and has attracted 36 entries. Included among these are three previous winners in Walk In The Mill (Robert Walford, successful in 2018 and 2019), 2017 scorer Blaklion (Dan Skelton) and Vieux Lion Rouge (David Pipe), who took the spoils back in 2016.

Walk In The Mill, who was also fourth behind the great Tiger Roll in the 2019 Randox Health Grand National, recently returned to action when a staying-on seventh in a G3 handicap chase at Ascot on 31 October, which was won by Regal Encore (Anthony Honeyball). Blaklion finished 11th in the same contest on his first start since February, 2019. Vieux Lion Rouge made his seasonal reappearance in a veterans’ handicap chase at Aintree on 25 October, shaping well when fifth.

Runner-up to Walk In The Mill in 2019 was Kimberlite Candy (Tom Lacey), who subsequently went on to success in the G3 Classic Chase at Warwick in January. The J P McManus-owned eight-year-old has been installed as the 8/1 favourite with William Hill.

Trainer Caroline Bailey is considering the William Hill Becher Handicap Chase for Crosspark, a 12/1 chance with William Hill. The 10-year-old enjoyed a fabulous 2018/19 campaign, winning the marathon Eider Chase at Newcastle and finishing runner-up in the G3 Scottish Grand National. After a curtailed season in 2019/20, Crosspark has run encouragingly on both outings this season, mostly recently coming home a narrow second at Sandown Park in a veterans’ handicap chase on 8 November.

Northamptonshire-based Bailey is the daughter of the late Dick Saunders, who created history at Aintree in 1982 when partnering Grittar to victory in the Grand National. At the age of 48, he was the oldest jockey to taste victory in the world’s greatest chase.

The trainer said: “The William Hill Becher Handicap Chase is a possible target for Crosspark.

“He ran at Sandown on Sunday and a month should be enough time between races and we will see how he is in the next couple of weeks, but we would like to run at Aintree.

“I was absolutely delighted with his performance at Sandown. He was also second on his first start of the season and has been a real star for us.

“He was running over a trip short of his best at Sandown, but I was so pleased with his effort. He is a proper staying chaser.

“Running over the Grand National fences has been something we have thought about for a while. After he was second in the Scottish National last year, it was something we discussed, but nothing really went right for him last season after that – the ground didn’t really seem to suit him at all as it was so testing.

“He is a lovely, big horse who jumps really well and I think the Aintree fences will really suit.

“Crosspark is neat and athletic over his fences and hopefully a race like the Becher will really highlight that if we decide to run.” 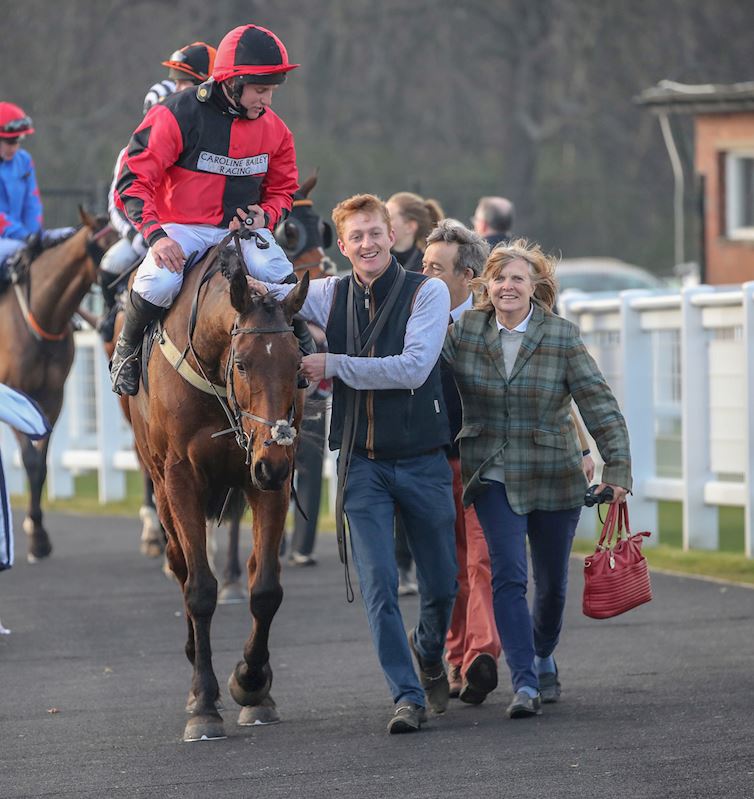 Gloucestershire-based Nigel Twiston-Davies is the most successful trainer in the history of the William Hill Becher Handicap Chase since its establishment in 1992 with six victories - Indian Tonic (1993), Young Hustler (1995), Earth Summit (1998), Hello Bud (2010, 2012) and Blaklion (2017). He has three entries this year – the G2-placed Calett Mad plus Crievehill and The Hollow Ginge.

Another trainer to have enjoyed multiple success in the William Hill Becher Handicap Chase is Yorkshire-based Sue Smith, who was responsible for Kildimo (1992) and Ardent Scout (2002). Her possible starter in 2020 is Vintage Clouds, runner-up in the G3 Ultima Handicap Chase at the Cheltenham Festival in 2019.

The likely top-weight is the admirable Black Corton (Paul Nicholls), a G1 winner in 2017 and a good fourth under top-weight behind Regal Encore at Ascot last month. The 11-times champion Jump trainer could also rely on Yala Enki, winner of the G3 Grand National Trial at Haydock Park in 2018, as he chases a fourth William Hill Becher Handicap Chase success following Silver Birch (2004), Eurotrek (2006) and Mr Pointment (2007).

There are three Irish-trained contenders. Jett (Jessica Harrington) is a G2 winner while Gordon Elliott has made entries for Ravenhill, successful in last season’s G2 National Hunt Chase at Cheltenham, and Alpha des Obeaux, who was third behind Walk In The Mill last year.

The 2018 G1 Cheltenham Gold Cup runner-up Might Bite (Nicky Henderson) is among 46 entries for the William Hill Grand Sefton Handicap Chase, which takes place over two miles and five furlongs of the Grand National course. The reigning champion trainer has four entries in total with another possible starter being Janika, who has been placed at G1 level and was fourth over the course in the 2019 Randox Health Topham Chase.

Modus (Paul Nicholls), who was impressive when winning a two and a half mile handicap chase over the Mildmay Course at Aintree on 7 November, is the 9/1 favourite with William Hill.

Mercian Prince (Amy Murphy) put up a good performance to win a handicap chase at Kempton Park on 9 November, jumping superbly to score by 12 lengths.

Newmarket-based Murphy is now eyeing a trip to Aintree for the nine-year-old, who is a 20/1 chance with William Hill.

Murphy said: “Mercian Prince has come out of his win at Kempton in great form.

“The Grand Sefton at Aintree is now probably the next target for him, all being well.

“He has obviously run in the race before (eighth in 2017), but we’re hopeful that he will really take to the fences as that seems to be his sort of trip.

“I was delighted with his win at Kempton. Jack [Quinlan] gave him a great ride and he stayed on strongly to score. The visor seemed to do the trick and his jumping was excellent.

“Hopefully, all being well, he can now go on to Aintree as it looks a good fit for him.”

Aintree is home to The Randox Health Grand National, the most famous horse race in the world which is the climax to a three-day Festival meeting in April. The racecourse hosts five other fixtures and is a leading conference centre in the north west of England.

Aintree is part of The Jockey Club which stages thrilling sporting occasions including The Randox Health Grand National, The Festival™ at Cheltenham and The Derby. Millions of people every year enjoy the special experiences The Jockey Club offers through racing, music, food and entertainment. Governed by Royal Charter, every penny made goes back into British Racing to help the sport thrive. The Jockey Club was founded in 1750 and today is the largest commercial group in Britain's second-biggest spectator sport, operating 15 racecourses nationwide, The National Stud, Jockey Club Estates, Jockey Club Catering, Jockey Club Live and the charity, Racing Welfare. For more information, visit www.thejockeyclub.co.uk