Abacadabras put his fall in last month’s Unibet Champion Hurdle at Cheltenham behind him to land his third career Grade One victory in the Betway Aintree Hurdle. 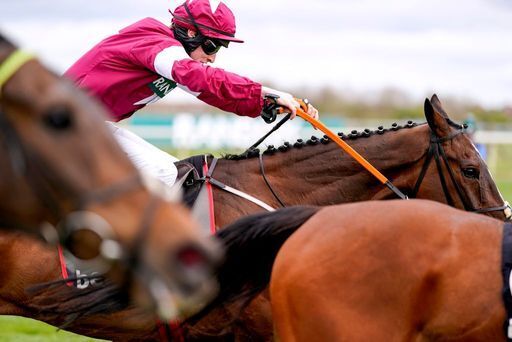 Two-time Champion Hurdle winner Buveur D’Air had been travelling well in the 2m 4f contest until being impeded by loose horse Jason The Militant in the closing stages, helping the Denise Foster-trained seven year old Abacadabras’ cause in the process.

Lisa O’Neill, representing Cullentra House stables at Aintree this week, said: “Jack gave Abacadabras a fantastic ride and he’s proved himself at Grade One level. I think the step up in trip definitely suited him. It’s fantastic for everyone back home, and Katie who looks after him has done a wonderful job, so full credit to her as well.

“He was perfectly fine after his fall in the Champion Hurdle. It was disappointing at the time, but everything’s worked out and we’re glad to be here today. It’s fantastic to get his head in front.

“Jack was delighted with him and everything went to plan. I think actually the loose horse worked in his favour, as he has a tendency to idle a little bit in front if he’s there for too long, so it worked to his advantage. For his first time at this trip, the sharp flat track definitely suited him and was probably an easy two and a half mile for him to contest straight away.”

Winning jockey Jack Kennedy added: “It was a very good performance. I was very happy with him. He travelled and jumped great and he took me there very easily, probably too easily as I got there a bit soon but the loose horse helped me.

“It gave my lad a bit of company so that was a big help. I wouldn’t be afraid after that, and I know this is a flat track, to give him a go over three miles and ride him cold and see how he gets on that way.

“I would have loved to have seen what way he would have run at Cheltenham as I was very happy with the position I was in but he just made a silly little mistake and he tipped up. That was great to get that today.

“I think he is underestimated. He is a horse with a lot of ability but I suppose probably the reason for that is things have to click with him and when they do he is an extremely talented horse.”

On Tiger Roll’s fourth-placed effort in the Betway Bowl earlier, Kennedy commented: “He was just completely outclassed and he couldn’t go the gallop the other horses were going. He is home safe and sound so that is the main thing.”

Buzz stayed on well to finish the length and a quarter runner-up. His trainer Nicky Henderson, who also trained fourth home Buveur D’Air, said: “They’ve both run great races and it was just lovely to see Buveur D’Air run like that.

“Jason The Militant (the loose horse) didn’t help him in any way. He was giving him his lead and then when he went and unseated his rider down the far side Buveur D’Air just started tanking too soon, which was bad luck on Nico as he’d lost his cover and then all he did was interfere with him when loose all the way up the straight. He was nearly doing too much too soon. There’s more to come from him. He’s a long way from his pension and that was good to see.

“When I talked to JP (McManus) the other day we were kicking ourselves for not putting him in the three-mile race at Punchestown rather than the two-mile. He’s in the Champion, but so is Epatante, and that’s where she’s intended to go. But he isn’t going to probably beat Honeysuckle. Probably Epatante won’t either, but she’d have a chance and she’s in good form.

“Buzz has improved dramatically but that will be it for him because he loves soft ground. He’s running in these now (Grade Ones) because he’s hit the top of all the handicaps. On good ground two miles is too short for him, but he stays two and a half, and he’ll get two and a half in heavy ground too, so all of those good two and a half mile races will come into play for him.”

Alex Hales, trainer of third-placed Millers Bank, an 80/1 chance, said: “I’m absolutely delighted with him. I’m chuffed to bits for his owner and felt a bit Clive Brittain-esque coming here really but he’s done nothing wrong.

“We thought he was improving and to be honest everything is about his chasing career really, so I didn’t think we had an awful lot to lose. I was keen not to run him in the handicap with there being 20-odd runners and we’re taking baby steps with him. He’s such a lovely horse and it really is all about next year and God willing he stays in one piece. He’s a big raw baby and all he wants is a fence.”

Jockey Kielan Woods, added: “He’s run an absolute corker. He was the 100-1 outsider of the field and it just goes to show how good a trainer Alex Hales is. He could have run him in the handicap where he probably would have been much shorter and he’s just jumped fantastic and is a gorgeous horse.

“If he was in Paul Nicholls’ yard he wouldn’t have been that kind of price. The bold call was proven right and it’s chasing next year for him. That’s his game and he’s a chaser through and through, he’s big and scopey and that was just absolutely fantastic.”