Chantry House capitalised on Espoir De Romay’s fall at the penultimate fence to claim his second Grade One victory in just over three weeks. 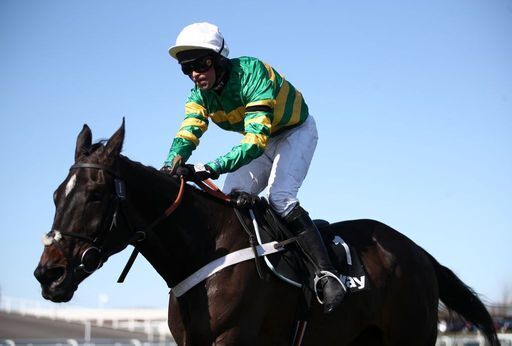 And Henderson said: “Like any horse that has been to Cheltenham then come on to Aintree it is tough. It is funny how he was having quite a good blow down there but they have gone quick. The aim of today was to see if he stayed three miles. They went quick enough today and we established today that it is the case that he is a three miler.

“That will definitely be it for now. He has had a tough race today. Even though he could ease down at the end they have still gone a ferocious gallop.”

Asked if he thought he would win when Kim Bailey’s Espoir De Romay was still leading, the Seven Barrows trainer replied: “I can’t really say, but Nico was reasonably confident he was creeping to the other horse. I feel sorry for Kim as his horse had put up a great exhibition and set a very strong gallop.

“That would be the plan (top staying races next season). You’ve got to admire the horse as any horse that can go to Cheltenham and follow up here has got to be pretty good. The horse has got a great temperament and a lovely attitude to life. He is a very good horse.

“He might have been lucky twice and I hope he hasn’t used all his luck up as he has got a long and bright future in front of him. I like using the Intermediate Chase at Sandown as a starting point for these types of horses but I think we could end up starting him off in the Betfair Chase at Haydock.”

Winning rider Nico de Boinville added: “When Espoir De Romay fell two out, I was just getting into my stride there. He was just taking a bit of coaxing along and getting him up into top gear. I could have done with a bit of company going down to the last - he was definitely idling. I hope David [Bass] and his horse are alright after that as they didn’t deserve it.

“Espoir De Romay had the benefit of not having been to Cheltenham and to come here after winning the Marsh three weeks ago, I thought it was a really good performance from Chantry House. He’s a responder and that’s what you need.

“We will leave plans up to the connections, but I would have thought something like the King George would be high up the priority list.”

Reflecting on his week so far, de Boinville said he was glad to get a win under his belt. He added: “We did need that win; it is important to back up the Cheltenham form too.

“Buveur D’Air didn’t deserve what happened to him - he was giving me a great spin round and it was just unfortunate that Rachael (Blackmore) came off halfway down the back and left me in front. I was using her as a  bit of a brake at that stage, but these things happen and it was good to see him run a good race after all that time.

“With Mister Fisher, I wasn’t very happy - I know you can come up with all sorts of excuses, but there were a load of cameras right by the last fence, and he had a right look at those, which is why he jumped into the middle of them, and it all went to pot after that.”

Espoir De Romay held a narrow advantage when falling two fences out. His jockey David Bass said: “It’s annoying, but he’s a very, very good horse. He’s still very raw and green and has so much to learn, but it’s annoying as he might have gone close in a Grade One. I can’t say we would have won, but we were going well enough.”

Trainer Kim Bailey added: “I don’t know how well we were going and you couldn’t say we’d have won, but it’s frustrating. He’s a talent, but we’ve known that all season. He’s 155-rated and they aren’t going to drop him for that, and he’s still only a baby. But so long as he’s safe and sound tomorrow we live to fight another day.”