Belfast Banter and trainer Peter Fahey landed their second big race in just three weeks as they followed up victory at the Cheltenham Festival by winning the Betway Top Novices Hurdle. 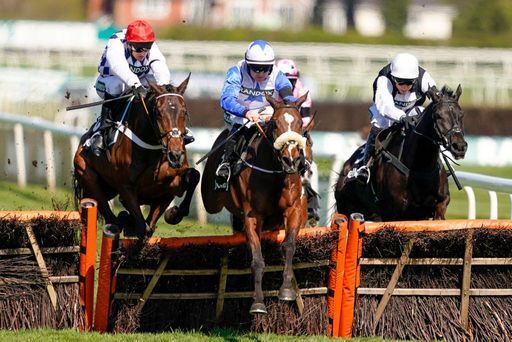 The six year old won the McCoy Contractors County Hurdle at The Festival exactly three weeks ago and followed that up at Aintree to win Fahey and jockey Kevin Sexton their first ever Grade Ones.

Fahey chose to watch the race back in Ireland, as he did for Belfast Banter’s Cheltenham victory. Speaking from home in County Kildare, he said: “I decided to stay away and not come over as it was lucky for us at Cheltenham. It was a brilliant performance and Kevin (Sexton) gave him a great ride.

“These faster run races really suit him big time. He was wrong at the weights with a few of them but we thought we would take our chance and see how it worked out. When I saw they fancied Dan Skelton’s (Third Time Lucki) I thought he might have a chance, If you go back to his second last run against him he was only two and a half lengths ahead and that was also on level weights.

“As much as it was nice to have a Cheltenham winner, getting a Grade One is something else as it is something I’ve always wanted to do. I was half-waiting for him to stop last time at Cheltenham and today I was much more excited as you could see he was always going to get there.

“I said to Kevin before he went out to ride him with a lot of confidence and try and ride him to be placed. There was no pressure on him as if we finished in the first three we thought it would be a good result, but he travelled and jumped very well. If you look back through his form though he never runs a bad race but I suppose the good ground has helped him a good bit.

“He used to be keen but in these better races he switches off and travels better and these fast run races really suit him. We will see what the handicapper does but if he doesn’t go too mad we would like to go for the Galway Hurdle as that was our main aim. That might be gone, but if it is at the end of the day we have a Grade One winner. However, if he gets a realistic mark we would go for the Galway Hurdle. We will be having a few drinks at home to celebrate that’s for sure.”

Winning jockey Kevin Sexton said: “I didn’t think I could be more shocked than after the County Hurdle, but I am more shocked today! I fancied him and thought he’d run well, but it’s a dream actually to win my first Grade One here.

“He settled very well. They went a very quick gallop and he jumped, he travelled like he always does. Turning in I wanted to switch out because I didn’t get a run down the inner,  because I don’t like to stop him once he’s coming, and I knew they’d stop at some point but I thought they’d take me further.

“I was in front a country mile too soon, and I was literally begging him from the last to keep going, and to be fair to him, he did. He was the opposite to what he was at Cheltenham; I don’t know whether he’s making liars of us again, or whether he’s suddenly developed a will to win. I was whispering in his ear going to the start that if he never won another race after today it wouldn’t bother me, but by the way he’s going, I hope he’s going to.

“The last month has been unbelievable. I have my first ride in the National (aboard Shattered Love) tomorrow - a year ago I was at home watching myself ride in the Virtual Grand National, having never ridden in the real thing. So much has happened in the last few weeks that I can’t get my head around. It hasn’t sunk in.

“Shattered Love is a good ride; Jack Kennedy fancied her - to get a ride in it is amazing, let alone a decent ride.

“I owe so much to Peter Fahey. He gives me everything he can and as much time as he can. I have learnt so much from working for him, not just about riding horses, just dealing with horses - to be able to repay him with these wins is amazing, and to give him his first Grade One winner, as well as mine, means so much.

“I think we might aim for the Galway Hurdle. Peter wanted him to go up a few pounds in the handicap for that - I think he has done some job handicapping himself! He’s gone from being low on my list of favourite horses right to the top at the minute - what’s he done in the last few weeks is unbelievable for any horse.”

Michael Scudamore, trainer of second home Do Your Job, said: “We’re really thrilled with him and he’s just improved all year. His form at the start of the season looked solid enough and then we went to Kelso the other day and he ran a really good second there.

“Brendan (Powell) said that day that he just didn’t quite see out the 2m 2f and to be fair it was Brendan’s shout to come here. We were wondering whether to go to the handicap or this and Brendan begged me to run him in this with the handicap being a boys race (Pinsent Masons Handicap Hurdle (Conditional Jockeys' and Amateur Riders' Race) and he was justified.

“He’s a lovely big horse and we’ll put him away now and if he jumps his fences like he jumps his hurdles he’ll hopefully be very exciting for us.

“You only had to see him in the paddock, he’s twice the size of everything else. He’s enormous and he’s actually incredibly slick over his hurdles for a horse who is as big as he is, so if he can translate that round it’s exciting for a small yard like us.

To be here and competing is great and hopefully he can be even better next year – another summer won’t do him any harm – and we’re very excited.”

Jockey Brendan Powell added: “That was a really good run. To be honest I thought he’d out-run his price. He’s run an absolute blinder and I thought I was going to ride my first Grade One for a second! We were beaten by a better horse on the day and no excuses, but he’s a nice horse to go chasing with next year.”

Nicky Henderson, who saddled third home Dusart, said: “It’s only his second run over hurdles and he’s very lucky to be here at all as he got loose and put a stake right through the middle of his chest. I didn’t think he’d be running again this season, and maybe not running again at all, so that was good. He’ll go over fences next season.”

Jockey Nico de Boinville said: “He probably wants an extra half mile and he probably already wants a fence. To go down by only a couple of lengths in a race as good as that was a very good effort.”