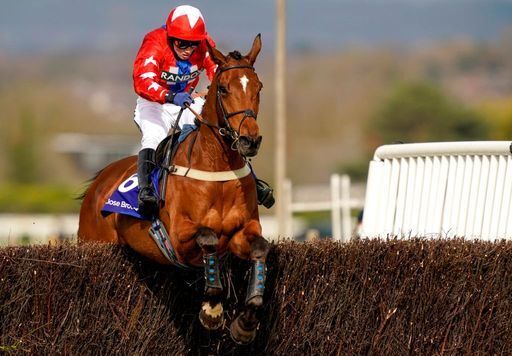 The Gary Moore-trained nine year old made every yard a winning one to come home a length to the good over Sully D’Oc AA at odds of 9-1.

Winning trainer Gary Moore was not present but his son and winning rider Josh Moore said: “He had a bit of a tendon strain when he first came over from France and we put that to bed. Then last season he was sick after his first couple of the runs, then the end of the season happened early and we never got to run him much.

“This season he was quite inexperienced when he started off and he didn’t really see out his races that strongly, but he is starting to do that a lot better now. His strong point is his jumping.

“He is a fast horse and you could work him with any flat horse at home and he would make you feel disappointed about them but that said his jumping is what gives him a breather and helps him through the race and he used that to his advantage.

“The plan today was to get a good start as it is quite a sharp start and the first three fences come at you quite quickly and I was hoping get them racing a bit, fill him up and use the back straight to our advantage and I think we did that.

“He is a neat horse and at the last today there was nothing on so I was able sit up and say ‘go in and pop’ and hopefully we had enough momentum to get the other side of it. It nearly cost us but he is intelligent enough that you can sit still and let him find his feet.

“He gets horses under pressure on a good day and I think this ground helps him massively. We always thought he wanted cut as he has a little bit of action on him but the drying ground has certainly seen him hit the line well.

“He was off a nice weight today and he has won carrying 10st 9lbs so he has got to progress again but he travelled and jump well enough for a higher grade of race.”

Richie McLernon, rider of second placed Sully D’Oc AA, said: “He ran a cracker and I’m delighted with him. The winner just probably gave me a little bit of a chance at the last. He probably won easy in the end but it just looked like I was coming because he just missed the last, but I was very happy with him and he’s run a lovely race.”

Tom O’Brien, who partnered the third home, Dostal Phil, added: “We had a good run, but he was flat out all the way and just stayed on to be third. He was in top gear all the way and softer ground would have been better.”

Charlie Deutsch, aboard fourth home Frero Banbou, said: “He travelled really well all the way through the race and jumped brilliantly, but turning in he just dropped the bit and I was a bit worried he might stop. But he kept galloping to the line and he’s pretty tough. The winner was quite impressive, but on a stiffer track it might have been different for us.”