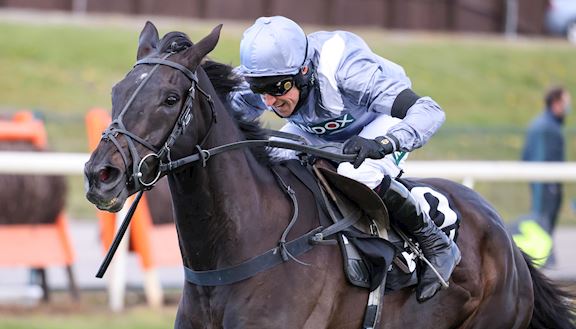 Trainer Dan Skelton admitted he was “relieved” after My Drogo sauntered to victory in the Grade One Betway Mersey Novices Hurdle.

The 5-4 favourite was never seriously challenged in the closing stages and came home nine and a half lengths clear of Minella Drama for the Dan and Harry Skelton team.

The six year old was immediately cut from a general 16-1 to 8-1 for next season’s Marsh Novices’ Chase at the Cheltenham Festival and from 33-1 to 14-1 for the Sporting Life Arkle Chase next March.

And Dan Skelton said: “It was a little bit of relief actually, sometimes with success the main emotion is relief and that’s exactly what I feel. I felt coming here it was nearly his race to lose with the preparation he has had missing Cheltenham.

“You can see how important preparation is to winning these big races. The horses missing Cheltenham have had a big advantage here and we always planned to do that with him. He has looked very good.

“To give away a penalty at Kelso in form that has really held up was an indication of what was possible. He jumped three out very well and just got to the front as there was no one else to go with him almost. It is a very exciting moment to be involved with a horse like him as he has got it all.

“The idea was to get through this season novice hurdling and next season go chasing and nothing will change. Despite the lure of better hurdles there has to be a point where you have to decide whether they are a hurdler or a chaser and giving his breeding, size and jumping you have to go now or never. He has to have a good novice chase career to make it into a top class horse.

“Going round there today I was a little concerned I had run him in the wrong race. I never had any doubt he would get two and a half but you get a little bit pessimistic during the race and think this is going a bit too well.

“He showed a good bit of stamina which I think will be vital going forward as ultimately we want to go down the staying chase route. He went off 50-1 outsider of the lot in his first bumper which I can’t really understand why as we thought he was a pretty good horse at home but we never worked him upsides until we worked him upsides once before Kelso.

“He is a horse that is very exuberant at home and always doing more than necessary. You have to turn the dials down not up. To be fair the team have done a great job. Joe, my assistant at home rides him every day and does a great job and it’s a job to basically keep a lid on him. Next season we will start low key over two miles and build up. We will probably not start until November and have the spring in mind.”

Jockey Harry Skelton added: “We’re delighted with My Drogo. If you think he only made his racecourse debut in October, it’s remarkable what he’s done. It’s a credit to the team, to Dan and his owners, who have come out with a plan, and hopefully he’ll be very exciting going forward.

“He’s got stamina in his pedigree, and we just thought that over two and a half miles, he wouldn’t be rushed too much in the early part of the race, because he doesn’t have that much experience, but he stayed on well.

“We got badly hampered and I hope Harry Cobden (riding Lucky One) is alright; it’s always a horrible thing when you ride over one of your colleagues. I couldn’t do anything about it and I just hope he’s alright.

“This horse won’t run again this season. We decided to side-step Cheltenham to come here - we thought this would really suit him and it has. We’ll look after him - Rome wasn’t built in a day, but if we mind him, hopefully one day he will repay us with big things. Hopefully when he gets over a fence it will improve him again - the dream’s alive, anyway.”

Trainer Donald McCain said of runner-up Minella Drama: “I’m delighted with him, he’s still very raw and was a bit free for a mile and is still doing enough wrong but he’s obviously very talented. I’d imagine he’d go chasing next year, he had two to three runs in point-to-points and they all school well at home. He’s a smart horse.”

Jockey Brian Hughes added: “He ran well. He’s a horse who’s improved with every race this year and he’ll jump a fence. He probably would have preferred a bit more juice in the ground, but it’s perfectly safe ground.

“He’s a Flemensfirth so he may have just preferred more of a cut but he’s no excuses and was just beaten by a better horse on the day and we’re pleased with him.”

Sam Twiston-Davies, aboard third home Guard Your Dreams, said: “He ran a nice race and we are looking forward to him next season. Whether he’ll be chasing or not has got to be talked about, because off a run like that he’ll potentially be well handicapped in the bigger hurdle races and perhaps he might start back in something like the Silver Trophy at Chepstow, or something on those lines. He rides quite smart.”

Henry de Bromhead, trainer of the fourth Ballyadam, said: “Rachael (Blackmore) felt he just rode a bit flat as much as anything. I expect that will be it for him this season, but we haven’t talked about it yet.”