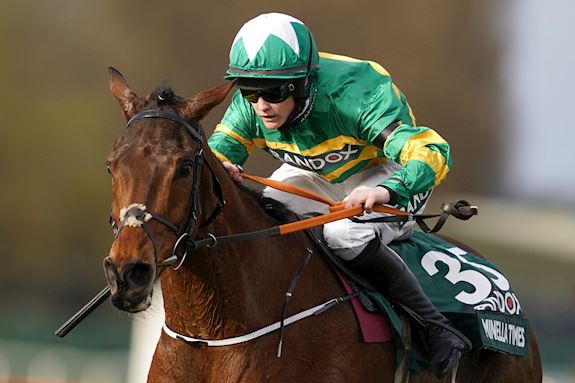 Another day, another piece of history. The sensational Rachael Blackmore rewrote the history books yet again, this time becoming the first female jockey to win the Randox Grand National.

And, while most of the focus was on the world’s greatest steeplechase, the seven race card at Aintree offered plenty of quality racing throughout the day too.

We saw the brilliant Shishkin maintain his 100 per cent record over fences for Nicky Henderson and Thyme Hill make up for his absence at the Cheltenham Festival last month by taking the Ryanair Stayers’ Hurdle. Then of course it was time for the big one.

Rachael Blackmore rewrote the history books yet again to become the first female jockey to win the Randox Grand National as she and Minella Times gave owner JP McManus a second win in the iconic race.

Minella Times had been backed into 11-1 after Blackmore rode six winners at last month’s Cheltenham Festival to win the leading jockey award.

Afterwards Blackmore, who grew up in Tipperary and is just 10 winners behind Paul Townend in the Irish Champion Jockey title race on 85, described winning the race as a “massive” moment in her career.

After partnering the eight year old to an historic six and a half-length victory, the 31 year old jockey said: “I am so lucky to be riding these horses for Henry. This is so massive. I had such a beautiful passage around.

“It’s unbelievable. It’s just incredible. I just got such an unbelievable passage through the race. Minella Times just jumped fantastic and brought me from fence to fence.”

Trainer Henry de Bromhead was following up an historic Cheltenham Festival in his own right. And he added: “I’m just delighted - amazing, super ride, she hardly left the rail.

“Yes, I used to dream about winning this - of course, but it was a very distant dream! These are the races you want to win. I feel so fortunate.”

DE BOINVILLE DOES “THE DONKEY WORK” AS SHISKIN STAYS UNBEATEN

Jockey Nico de Boinville praised Shishkin’s versatility after winning the Doom Bar Maghull Novices’ Chase, but admitted: “I had to do all the donkey work.”

The seven year old went off the 1-8 favourite having won the Sporting Life Arkle Chase at Cheltenham last month. But he was made to work hard for his victory by Funambule Sivola, who was bearing down on Nicky Henderson’s superstar after the last fence.

After securing the three and a quarter length victory to maintain his unbeaten record over fences and win a second Grade One chase, de Boinville said: “We were going very steady anyway and the one thing that Shishkin does is that he stays and I wouldn’t want to turn it into a sprint really. So he’s certainly versatile like that, but I certainly had to do all the donkey work there anyway.”

Asked what he feels the horse’s best trip will be as he gets older, Nico replied: “At the moment, he’s doing everything we ask of him at two miles, so why fix something that’s not broken? Off a stronger gallop, he’s only going to be better. Look, I think he was just idling going to the last there and I think he would have picked up again, which he did.

“I think the way the race was run at Cheltenham, it was a hard-fought two miles, hthey went a really good gallop and that’s probably where you saw him at his very best, where he was able to stay on at the end. Whereas today, like I said, I’ve had to do all the donkey work, go and find those jump. I thought he was very slick.”

Thyme Hill left it late to capture the Grade One Ryanair Stayers’ Hurdle less than a month after being pulled out of the Cheltenham Festival.

Philip Hobbs was disappointed that his stable star could not line up against Paisley Park in a much-anticipated rematch at The Festival just over three weeks ago.

But that turned to joy here at Aintree as Thyme Hill and jockey Tom O’Brien left it late to make their move and snatch victory from Dan and Harry Skelton’s game mare Roksana.

The victory came just a week after regular rider Richard Johnson retired from the saddle and Hobbs said afterwards: “It’s fantastic and I’m really delighted. We are all chuffed for ourselves in the yard but for Tom O’Brien who has taken over from Richard Johnson recently it is a great way to start.

As for his future, Hobbs said that while Thyme Hill jumps bigger obstacles well, hurdles seem the obvious preference.

IMPRESSIVE MY DROGO “HAS IT ALL” SAYS EXCITED SKELTON

Trainer Dan Skelton admitted he was “relieved” after My Drogo sauntered to victory in the Grade One Betway Mersey Novices Hurdle.

The 5-4 favourite was never seriously challenged in the closing stages and came home nine and a half lengths clear of Minella Drama for the Dan and Harry Skelton team.

The six year old was immediately cut from a general 16-1 to 8-1 for next season’s Marsh Novices’ Chase at the Cheltenham Festival and from 33-1 to 14-1 for the Sporting Life Arkle Chase next March.

And Skelton said: “It was a little bit of relief actually, sometimes with success the main emotion is relief and that’s exactly what I feel. I felt coming here it was nearly his race to lose with the preparation he has had missing Cheltenham.

“You can see how important preparation is to winning these big races. The horses missing Cheltenham have had a big advantage here and we always planned to do that with him. He has looked very good.”

“To give away a penalty at Kelso in form that has really held up was an indication of what was possible. He jumped three out very well and just got to the front as there was no one else to go with him almost. It is a very exciting moment to be involved with a horse like him as he has got it all.”

Hometown Boy appeared well in control approaching the final flight, but blundered to leave jockey Ciaran Gethings with work to do to get his mount home in front.

Edmunds said: “It was fear that helped Ciaran stay on at the last - he didn't want to hit the floor! I don’t know what I was thinking but it definitely isn’t repeatable. If he was a tired horse his legs would have gone to jelly, and he’d got plenty left.

“The whole family own the horse and while Mum is at home the others are here today and it’s great. It’s a shame we can’t really go out and celebrate, but come Monday night we’ll have a few beers. Everyone at home has worked very hard.”