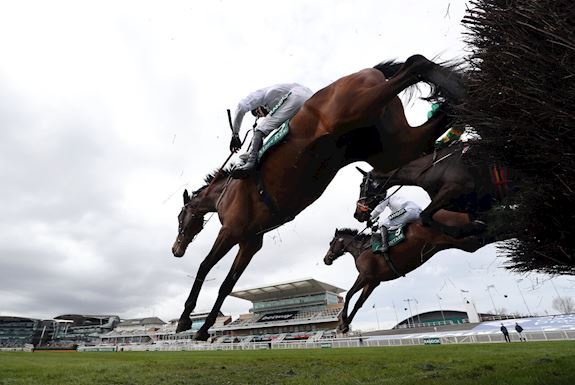 Day One of the Randox Grand National Festival was just as thrilling as we hoped it would be.

Four Grade One races kicked off the afternoon’s proceedings, followed by the first of three races this week over the iconic Grand National fences.

Owner Sir Alex Ferguson celebrated winning the first three races on day one of the Randox Grand National Festival and hailed it as “the best day I’ve had in my time in racing”.

The former football manager watched Clan Des Obeaux ease to victory in the Betway Bowl, after Monmiral and Protektorat had sealed victories earlier in the day to give him a Grade One hat-trick in little over an hour.

It was Ferguson’s first treble on Merseyside since 2007, when his Manchester United side defeated Everton 4-2 in the April and 1-0 in the September – both at Goodison Park - and then Liverpool 1-0 at Anfield in the December.

Clan Des Obeaux has now cemented his place as Ferguson’s best ever Jumps horse, with two Ladbrokes King George victories to his name and now a third Grade One win in the Betway Bowl.

Ferguson owned Rock of Gibraltar, who won 10 of his 13 starts in 2001 and 2002, including the 2000 Guineas at Newmarket, the Irish Guineas, St James’s Palace Stakes, Sussex Stakes and Prix du Moulin.

However, the Old Trafford legend said: “That’s the best day I’ve had in my time in racing, which is about 20 years or so. It is different to when I was managing my football teams.

“I was in control of what was going to happen on the pitch, but I’m not in control of that (on the racetrack) as the trainer does all of that and as an owner you hope it goes well. You do get the same excitement when you win big races like that as it does get you very excited.”

PROTEKTORAT SHOCKS HIS OWN TRAINER WITH VICTORY

Dan Skelton admitted even he was “shocked” by Protektorat’s impressive performance in the SSS Super Alloys Manifesto Novices’ Chase, the first leg of part-owner Sir Alex Ferguson’s treble on the day.

His victory in the opening race of the Randox Grand National Festival prompted the trainer to say he is now looking forward to “a big, big future” for the six year old, who has won three times and finished second twice in his five runs this season.

He said afterwards: “I have to say that it was a bit of a shock for him to win. On autumn form, yes, he could win, but it’s a long way back to here from what happened at Kelso, where he got beaten at a short price. He was beaten after two jumps that day, but we redid his soft palate, put a tongue strap on and took the hood off, and we changed the tactics as well.

“I honestly didn’t think what just happened there would happen. Ultimately he’s done it at a very high level and the form is very strong from that race.”

Unbeaten Monmiral made it five wins from five career starts to land his first Grade One in the Doom Bar Anniversary 4-Y-O Juvenile Hurdle.

Trainer Paul Nicholls was rewarded for opting not to send the talented hurdler to run in the JCB Triumph Hurdle at The Festival™ supporting WellChild at Cheltenham last month and watched as he eased to a seven and a half length victory.

Nicholls said afterwards: “The owners weren’t that keen to go to Cheltenham. In normal years that (Triumph Hurdle) is a bit of a cavalry charge but as it turned out there weren’t many runners. I was itching to go but he is a horse for the future and this is a lovely race to win.

“He is unbeaten now and there is lots to look forward to. This side (of the Irish Sea) it has to be (best performance from a juvenile). He was very impressive at Haydock and the form has worked well and today he has beaten Adagio well.

“He just gallops on strong and he has just kept on getting stronger and improving as the season has gone on and today I thought was the best he has looked. It is hard with novice chasers as a five year old.

“If he had another year over hurdles it wouldn’t do him any harm. I said to the guys it might be nice to start him off in something like the Fighting Fifth next season, then we know where we can go afterwards.”

The Betway Aintree Hurdle went to Abacadabras, who put his fall in last month’s Unibet Champion Hurdle at Cheltenham behind him to land a third career Grade One victory.

Two-time Champion Hurdle winner Buveur D’Air had been travelling well in the 2m 4f contest until being impeded by loose horse Jason The Militant in the closing stages, helping the Denise Foster-trained seven year old Abacadabras’ cause in the process.

Lisa O’Neill, representing Cullentra House stables at Aintree this week, said: “Jack gave Abacadabras a fantastic ride and he’s proved himself at Grade One level. I think the step up in trip definitely suited him. It’s fantastic for everyone back home, and Katie who looks after him has done a wonderful job, so full credit to her as well.

“He was perfectly fine after his fall in the Champion Hurdle. It was disappointing at the time, but everything’s worked out and we’re glad to be here today. It’s fantastic to get his head in front.

“Jack was delighted with him and everything went to plan. I think actually the loose horse worked in his favour, as he has a tendency to idle a little bit in front if he’s there for too long, so it worked to his advantage. For his first time at this trip, the sharp flat track definitely suited him and was probably an easy two and a half mile for him to contest straight away.”

Trainer Joe O’Shea watched his 66-1 chance Cousin Pascal win the Rose Paterson Randox Foxhunters’ Chase – then revealed it had been his ambition to have a winner over the iconic Grand National fences since sneaking in to Aintree as a boy to watch the race in 1976.

O’Shea, whose yard is just an hour from the track, was a teenager when watching Rag Trade win the world’s greatest steeplechase 45 years ago and vowed that day he would one day saddle a winner on the famous course.

After Cousin Pascal and jockey James King helped turn that dream into a reality by winning the 2m 5f contest, he said: “We are local - we’re based in Nantwich, Cheshire. I’m a Manchester boy, really; moved out to the countryside.

“My dream, ever since I sneaked in to watch Rag Trade win the 1976 National, I’d just left school - I said, ‘I’m going to train a winner over these National fences. I didn’t want a [training] licence, never interested me, I’m happy with what I’m doing, training the pointers.

“But I’ve come so close in this race. Cottage Oak was going well and finished fifth and Lilbitluso met with an accident when he was going very well at the Canal Turn two years ago.

“I must admit, this horse has improved so much since he came - I’ve never seen a horse improve so much in my life. He came from Ireland, the cheapest horse I’ve ever been associated with - we’d spend more on champagne in a weekend than what he cost!

“I think the bill for getting him vetted was more than he cost! When bet365 put my money in my account tonight, it will be spent tomorrow on the beer - we will celebrate this proper. It's taken me 30 years to do this - it might take me another 30.”