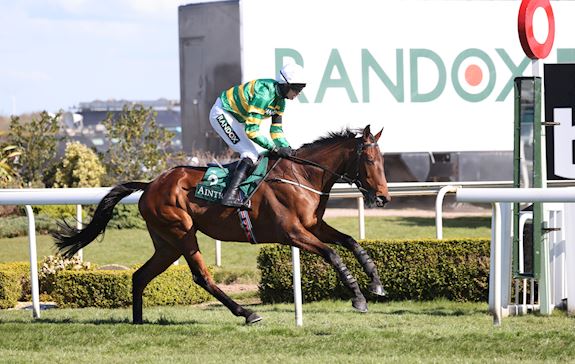 Joseph O’Brien insisted he will not be making plans for Fakir D’Oudairies just yet, despite his talented six year old cruising to an 11 length victory in the Marsh Steeple Chase at Aintree.

The talented chaser was second in the Ryanair Chase at the Cheltenham Festival last month but went one better this afternoon, breezing past long-time leader Master Tommytucker to secure the honours in the 2m 3f contest.

Speaking away from the track, trainer O’Brien said: “I thought it was a great performance from the horse and Mark (Walsh) gave him a great ride. He has been a real consistent horse all of his life.

“He has been second in four Grade Ones since he won his previous one so it is nice to get another on the board at this level with him. I’m delighted for JP (McManus), Frank Berry and all the team.

“I thought he jumped very well today. He made a little mistake early on but he soon got into a nice rhythm and Mark gave him a fantastic ride.

“Although he has finished second a lot there is no questioning his attitude as he wears his heart on his sleeve and gives everything in every race. He has been a little bit unlucky as he has been beaten by some top class horses. I’m just delighted to get another winner on the board.

“I say that two and a half miles is probably the trip that is best for him. We will see how he comes out of this before making any plans. We will just enjoy today and take it from there.”

Jockey Walsh added: “He deserved his day in the sun - he’s been running great all season, so I’m delighted he got his head in front. He had a hard race in the Ryanair at Cheltenham and Joseph has done well to freshen him up, and he’s done it well today.

“I’m looking forward to Any Second Now in the National tomorrow. You can make all the plans you like for the race, but anything can happen, as we know. The ground is on the slow side of good.”

Danny McMenamin, rider of runner-up Nuts Well, said: “We didn’t have a lot of luck, but that’s the way racing is and I can’t say it made the difference between winning and losing. My lad has run a blinder and we are very happy with him.”

Olly Murphy, trainer of third home Itchy Feet said: “That was a great run. He’s always been a horse who’s had plenty of ability, he’s just been a horse whose jumping has let him down all season.

“His early season form has read well all year and there’s just been a bit of the jigsaw missing. He’s been down to Henrietta Knight’s for the last couple of weeks on and off and she’s done a great job with him.

“I thought he jumped a lot better today, there’s still room for improvement but he’s a horse to be competing at this level and I don’t know where we’ll be starting off next year but it’s tough when they come out of novice company for the first time.

“I’d say he’s found it tough this year, but he’s a good horse and we’ll kind of place him accordingly next year, but I thought that was a career best yesterday and he’s one to look forward to.”

Paul Nicholls, trainer Politologue (4th), Duc Des Genievres (5th) and Master Tommytucker (6th) said: “I thought it looked as if Politologue didn’t stay two and a half miles. Harry (Cobden) said he was never actually going particularly well, but watching it I thought he looked good for a long way and I thought down the back he was travelling beautifully. He might be better over two though, and letting him really attack and jump rather than hanging on to him.

“Also, we had him ready for the Tingle Creek and then he had a hard race at Ascot. We got him ready again for Cheltenham, which didn’t happen for him (last-minute withdrawal following minor bleed) and it’s always hard to get them really right again in those circumstances.

“He’ll have a nice long holiday now and then go straight for the Tingle Creek. We’ll look after him and if at any time we think he’s lost any enthusiasm we’ll call it a day.

“I don’t know what happened to Master Tommytucker when Sam (Twiston-Davies) nearly came off, as he didn’t actually make a mistake. It was an odd one, but it was an amazing recovery and he’ll come back next season.