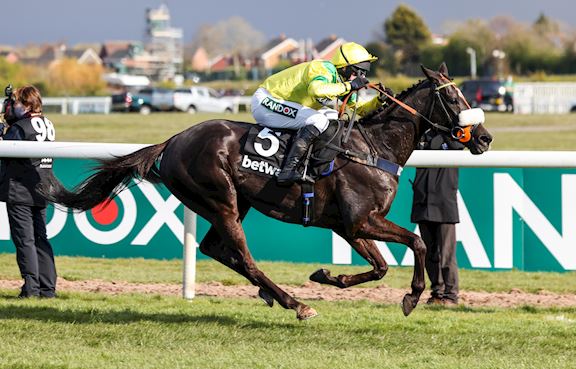 Kim Bailey watched Happygolucky win the Grade Three Betway Handicap Chase – then said he could be one for the Randox Grand National in future years.

Agent Aiden Murphy bought Happygolucky with the trainer for £55,000 at Cheltenham in December 2018 and pointed out that he went through the ring just minutes before Shishkin (£170,000 two lots later).

Bailey, who saddled Mr Frisk to victory in the 1990 Grand National in a course-record time, said of Happygolucky’s win after a frustrating week: “It’s about time! I’m really chuffed with that.

“For a novice to come here and jump like that was quite something. He’s a proper little horse and he was my main fancy at Cheltenham. He did nothing wrong there, and he’s backed it up here, which was really good.

“Next season I think he’ll end up here in the National. He’s such a good jumper and such a professional. He’d jump those fences for fun, so see you here next year!

“I think we came across a horse on the day (at Cheltenham in Vintage Clouds) that was primed, had a wind operation and had first time cheek pieces on for the first time. We were beaten fair and square, although we were staggered we did get beat but we did.

“That was a great performance today. He is a novice but he is a professional little horse. The way he jumps and handles himself is extraordinary. I think we are quite limited to where we can go and he still has that novice tag so I suppose there might be another novice for him but we are running short of time now and he has done his bit for the season. It would be nice if he could come back here this time next year an hour later.

“He could progress accordingly as he jumps so well and is a professional little race horse. He seems to stay. You could run him over a shorter trip on softer ground but although he is not the biggest he is a very athletic individual. You have got those early season races at Cheltenham next season. If it was soft ground you could go for the Paddy Power or you could even think about the Ladbrokes. This makes up for the rest of the week and it is nice to get a winner on the board.”

Winning jockey David Bass commented: “He’s a cracking little horse. It was only his fifth run over fences, yet he travels and jumps and is just so professional. I got in a bit of trouble turning in, and it probably helped me because I didn’t get there too soon in the end. Really good performance.

“I couldn’t believe he got beat at Cheltenham, and it turned out the winner was probably a well-handicapped horse who improved for cheek pieces and a wind op, but we’re delighted with this.

“I rode him in work last Saturday and he felt brilliant. Again, another great effort by the team at home. He’s managed to keep a reasonable level of form all season and even when I saw him last week he looked amazing, and when I saw him here today he looked like he had never been to Cheltenham.”

Talking about Espoir De Romay’s fall yesterday and whether the horse would have won if he hadn’t fallen, Bass said: “You can never be sure. I was going well without running away, but who knows what would have happened? I didn’t know how well Chantry House was going. Look, he [Espoir De Romay] was absolutely electric down the back for a horse without much experience who is still very raw and green. He almost tried too hard at the fence but the main thing is that he is ok.”

Jonathan Burke, rider of runner-up Johnbb, said: “He ran a great race. We thought he was on a progressive mark and he’s shown he is. The winner could turn out to be very good, and he’s got Cheltenham Festival form. Johnbb is a young horse and still improving.”

Dan Skelton said of third home Spiritofthegames: “He’s so consistent, fair play to him and he’s probably getting used to being a bridesmaid which is unfortunate for any horse! Look, he’s run well again and he’s a solid horse.”