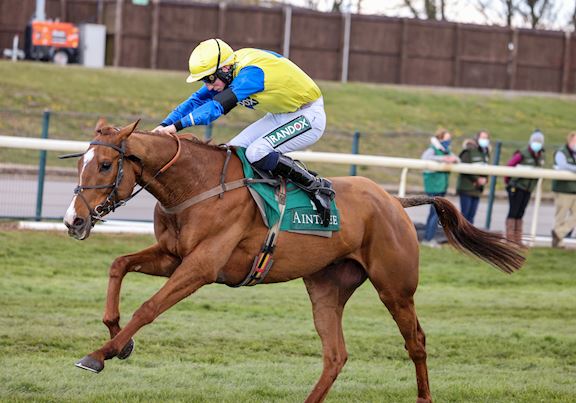 Hometown Boy appeared well in control approaching the final flight, but blundered to leave jockey Ciaran Gethings with work to do to get his mount home in front.

Edmunds said: “It’s great for everybody. This was the plan. We planned it with Alan Garratt, one of the owners - we wanted a prep run, so we went to Kempton and that worked well.

Referring to the blunder at the final flight, Edmunds added: “It was fear that helped Ciaran stay on at the last - he didn't want to hit the floor! I don’t know what I was thinking but it definitely isn’t repeatable. If he was a tired horse his legs would have gone to jelly, and he’d got plenty left.

“That will be him done this season. This is beautiful ground but it’s as quick as he would want it. He’ll go out in the field now and hopefully go novice chasing next year. He’s schooled plenty over fences at home, and that’s probably where we’ll go.

“The whole family own the horse and while Mum is at home the others are here today and it’s great. It’s a shame we can’t really go out and celebrate, but come Monday night we’ll have a few beers. Everyone at home has worked very hard.”

Winning jockey Ciaran Gethings added: “I’ve ridden him since a bumper horse and I know what he is like. He is as brave as a lion. He was looking around a bit coming to the last. He came out of my hands a few on the way round. Fair play to him for finding a leg as I think any other horse would have fell.

“It just proves how well he won as I think if he was a tired horse he would have fell where as he found two legs to be honest. He is a proper animal. That is what the fear of God does to you when you can see the ground.

“I didn’t want to do any heroics. I thought pop the last as I know he won’t stop. He had better options. He went for the picture more than me I think. It was a new trip but he is by the same sire as the Irish National winner on Monday (Freewheelin Dylan). Curtain Time is not a fashionable sire but his pedigree was all about staying.

“We rode him as if he would stay and he did. It was a great buzz. Even his bumper form is very good. He ran very well in two good bumpers. I think that will be him over hurdles. I think he will go over fences next year. You never know he could be back here in a few years’ time for the big one as that is the type of horse he is.”

Trainer Laura Morgan said of her runner-up, J’Ai Froid: “That was a great run. He’s just gone from strength to strength all season and improved for every run, so we’re just delighted. That’s him for the season now - we’ll school him over fences and that’s where he’ll be going next year.

“He’s even more exciting for next year as he jumps his hurdles a bit too big, He’s not slick and quick enough over them really and I think that was his downfall today. But going forward he’s very exciting and the further he goes the better he’ll be.”

Rachael Blackmore, rider of third home Tea Clipper, said: “He ran well and he’ll be a lovely horse when he goes over fences.”

Harry Skelton, the jockey of fourth Ashtown Lad, added: “I was delighted with him. He’ll make a lovely chaser next season.”