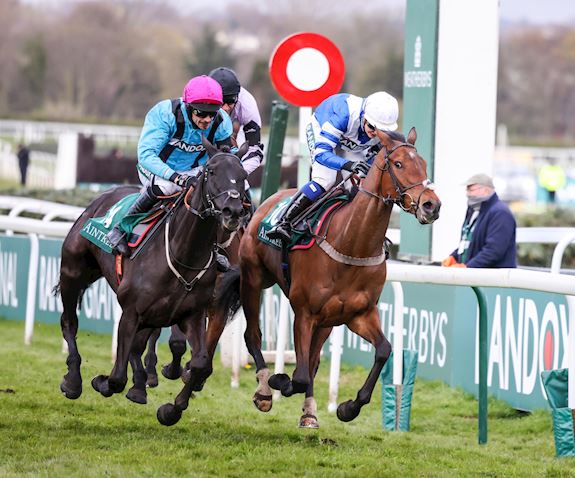 MEGAN NICHOLLS “ON CLOUD NINE” AFTER BIGGEST VICTORY OF HER CAREER

The pair ensured Megan’s 11-times champion trainer father Paul Nicholls ended what has been a mixed Randox Grand National Festival with a smile by beating Peking Rose by half a length in a terrific finish to the concluding race of the three-day meeting.

For good measure, the trainer also saddled the close third, Stage Star, who had been second to Knappers Hill when the pair met earlier in the season at Ascot.

Speaking afterwards Megan said: “That was amazing - I’m on cloud nine. I can’t believe what has just happened. I spoke to Rachael (Blackmore) before I came out and she says she was shaking like a leaf and I feel like that now.

“It’s awesome. I’m delighted. Who would have thought I’d have been riding at this meeting? I had a great time pointing then turned to the Flat. I’m just so happy. Dad and the team have really helped and looked after me and when he mentioned about riding some of the bumper horses I was snapping his arm off. You can’t help but be excited riding young gorgeous horses like that.

“I know I’m babbling on but I’m quite speechless at the same time. It’s awesome. Any bigger meeting whether it is over the flat or jumps is huge. To be riding on Grand National day is like anyone's dream. To have a winning chance, let alone be able to ride the winner is just amazing. It’s my first ride in a graded race.

“This horse has been fantastic. He was my first listed winner and he has now given me a graded winner. Mr Barber and Mr Vogt who own him have been huge supporters of the yard but me as well and to repay them is just incredible. My legs are going underneath me. I’m just ecstatic.”

On the race itself she said: “I ended up with no real position and it was a bit bumpy early on. To be honest I thought rather than go five wide I would take back and ride for luck and every time I gave him a squeeze he was coming good for me so I just had to be patient.

“Coming down the home straight I was either switching out or switching in and to be honest I got pushed in a little bit and when I gave him another squeeze he came good quickly. He is a phenomenal horse and anything he has done this year is a blessing as whatever he does over the next couple of seasons jumping I think he will be special.”

Megan’s father Paul Nicholls, who now need just nine winners to ensure a best-ever season, added: “I’m absolutely thrilled. For Meg to ride a winner for me here is absolutely brilliant. She rode Knappers Hill to win the Listed bumper at Ascot, but winning this Grade Two on a day like today would be her biggest win so far without a shadow of doubt. She’s doing really well as she’s riding winners on the Flat and in bumpers. I’m chuffed to bits for her.

“Megan has only ridden Knappers Hill twice - she won a Listed race on him at Ascot just before Christmas, beating Stage Star. This has been his aim since then; proper job. He’ll go novice hurdling next season and start over two miles. Both he and Stage Star are lovely horses. A good summer out and they’ll be exciting next year.”

“They are both lovely horses and they were first and second at Ascot. Knappers Hill has a lot more boot than Stage Star, which is why we held him up. We thought he’d go close. They are lovely horses for novice hurdles next season. Knappers Hill is sharp and will be a two-miler I would have thought, and the other horse will probably want two and a half.”

Paddy Brennan, who rode second-placed Peking Rose, said: “If I’d have straightened him up more in the final half a furlong we’d have won. He just kept hanging in behind a horse in front and was very green, but he’s a nice horse.”

Trainer Fergal O’Brien added: “Mrs Jones (owner) texted me this morning and asked if everything was ok because he was drifting like a barge, but he doesn’t know his price and we were very hopeful of a good run.

“This was ideal for him to come here today and this was the plan for a long time. We’ll school him now and then he’ll go away and have a nice holiday and he’s a cracking prospect as a novice hurdler to look forward to as well. Mrs Jones has bred generations of the family and they’ve been around a long time and they’ve always been great supporters of mine.”

Harry Skelton, rider of third placed Stage Star, said: “He’s a lovely horse for next year. The form worked out about the same as at Ascot.”