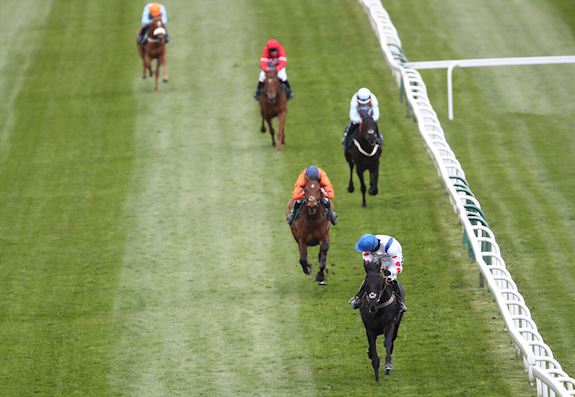 Unbeaten Monmiral completed his perfect season and made it five wins from five career starts to land his first Grade One in the Doom Bar Anniversary 4-Y-O Juvenile Hurdle on day one of the Randox Grand National Festival at Aintree.

Trainer Paul Nicholls was rewarded for opting not to send the talented hurdler to run in the JCB Triumph Hurdle at The Festival™ supporting WellChild at Cheltenham last month and watched as he eased to a seven and a half length victory.

It was also a second win on the day for part-owners Sir Alex Ferguson and Ged Mason.

Nicholls said afterwards: “The owners weren’t that keen to go to Cheltenham. In normal years that (Triumph Hurdle) is a bit of a cavalry charge but as it turned out there weren’t many runners. I was itching to go but he is a horse for the future and this is a lovely race to win.

“He is unbeaten now and there is lots to look forward to. This side (of the Irish Sea) it has to be (best performance from a juvenile). He was very impressive at Haydock and the form has worked well and today he has beaten Adagio well.

“He just gallops on strong and he has just kept on getting stronger and improving as the season has gone on and today I thought was the best he has looked. It is hard with novice chasers as a five year old. As you saw with Hitman earlier they don’t get much weight allowance in the spring and taking on those older horses is quite hard.

“If he had another year over hurdles it wouldn’t do him any harm. I said to the guys it might be nice to start him off in something like the Fighting Fifth next season, then we know where we can go afterwards.

“Say we went to Newcastle or something like that and he won we know what route to go down if he wasn’t good enough then maybe we could go chasing. We will keep our options open.

“At home he works on good ground so I don’t think it matters. He has got an engine that is all that matters. He has won five from five and he is obviously an exciting horse and Harry said he is one of the best juveniles he has sat on. There is a long way to go but he was brought to be a chaser and ultimately that is where he will end up.”

Part-owner Ged Mason said: “To have one winner here is always an achievement, but to have a double - and two Grade Ones - is fantastic and we’re all delighted.

“And Hitman ran a great race in the first as well; he’s a year younger than all the other horses and is one to look after for the future. We’ll probably give him a rest now and he’ll come back a stronger horse next season.

“I pinch myself when I think that Monmiral is five from five - I don’t think I’ve ever owned a horse who has done that, really - it’s a tremendous feat and he’s come up against some quality horses. Talking to Paul, he might start by going hurdling next year and see how it goes. Sometimes he doesn’t respect hurdles and gets a bit close, but we’ll see.”

David Pipe, trainer of the runner-up, Adagio, said: “He ran a great race, obviously the mistake at the last didn’t help but he’s had an amazing season. Win, lose or draw he’s come out of a claimer so it’s been amazing what he’s done.”

A further nine and a half lengths back in third was Fiveandtwenty and her trainer Donald McCain said: “I’m delighted with that. I wouldn’t mind a few more like her. She’s a smasher. She’s had a tough old paper round, coming from Mark Johnston on the Flat.

“She took to hurdling really well and she’s won a Listed race and now been placed in a Grade 1, which for a mare is fantastic. I’ve thought all year that Paul’s horse was probably the best juvenile in the country, and to be third behind those two was no disgrace.

“An autumn target would be the mares’ race on Charlie Hall day, but what we do between now and then I don’t know.”

Jockey Brain Hughes added: “She was entitled to take her chance and she’s run well behind two good horses. She’s an improving filly, and you have to happy with that.”