Trainer Joe O’Shea watched his 66-1 chance Cousin Pascal win the Rose Paterson Randox Foxhunters’ Chase – then revealed it had been his ambition to have a winner over the iconic Grand National fences since sneaking in to Aintree as a boy to watch the race in 1976. 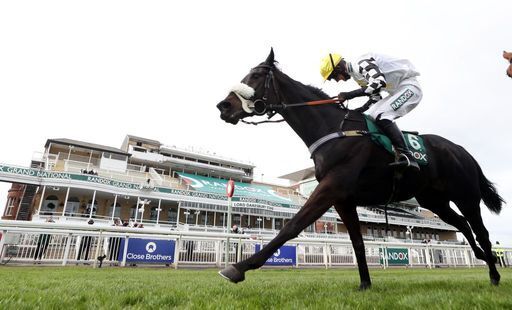 O’Shea, whose yard is just an hour from the track, was a teenager when watching Rag Trade win the world’s greatest steeplechase 45 years ago and vowed that day he would one day saddle a winner on the famous course.

After Cousin Pascal and jockey James King helped turn that dream into a reality by winning the 2m 5f contest, he said: “We are local - we’re based in Nantwich, Cheshire. I’m a Manchester boy, really; moved out to the countryside.

“My dream, ever since I sneaked in to watch Rag Trade win the 1976 National, I’d just left school - I said, ‘I’m going to train a winner over these National fences. I didn’t want a [training] licence, never interested me, I’m happy with what I’m doing, training the pointers.

“But I’ve come so close in this race. Cottage Oak was going well and finished fifth and Lilbitluso met with an accident when he was going very well at the Canal Turn two years ago.

“I must admit, this horse has improved so much since he came - I’ve never seen a horse improve so much in my life. He came from Ireland, the cheapest horse I’ve ever been associated with - we’d spend more on champagne in a weekend than what he cost.

“I think the bill for getting him vetted was more than he cost! But he’s never stopped improving and then the other day, this time last week, I worked him with a maiden of mine we do think a lot of, and the maiden beat him.

“When I spoke to the owner before I threw the jockey on, I said, ‘let’s enjoy today, this could be a bit fast for him, but we’ll come back next year and we’ll do the job proper’, because I thought he’d lack early pace.

“All he does is stay, and I said to the jockey, ‘get the best start you can, because nothing will be coming faster’, so once he was bang there at the home turn, over the Melling Road, I thought ‘there’s only one winner now’. Thank you to Aintree for putting it on - we absolutely love this place.

“When Bet365 put my money in my account tonight, it will be spent tomorrow on the beer - we will celebrate this proper. It's taken me 30 years to do this - it might take me another 30.”

Jockey James King, partnering his second winner of the race following Dineur in 2007, said: “The first one didn’t really sink in but I will definitely appreciate this one a lot more. He said don’t miss the start and don’t give any ground away and you will be finishing fast at the end and his instructions proved correct.

“I couldn’t believe the start I got with 20-odd runners lining up abreast. I thought they would go a hellish gallop over the first four. Me and Jack Andrews got a great start - we went down to the second upsides and that’s where I stayed really to the fore.

“I had a great sit down to the inside and he is a very neat agile horse. I was able to give him a good spin around the Canal Turn and he jumped well from there. It is great. It didn’t sink in the first time but second time it means a whole lot more. After the race he said ‘brilliant’ and his instructions before the race were “Give it a ride” and hopefully I’ve done that.”

Tom Ellis, trainer of runner-up Latenightpass said: “That was absolutely brilliant. I foaled this horse the night before I had my only ride around here, when I finished third, and he has improved every season. It’s a dream come true to have one as good as he is.

“We’ve done everything with him until this day, bringing him up through the ranks, and to run as well as he did when fourth at Cheltenham was fantastic. This was a bit of an afterthought to be honest, but I think next year we’ll skip Cheltenham and train him for this. He’s barely 16 hands, so not very big, but he loved it and we’ll definitely be coming back.”

Jockey Gina Andrews, Ellis’s wife, added: “That was brilliant. He went really well. He made a bad mistake at the third-last, but I don’t think that cost me. I thought I had it won when I had David (Maxwell) beat, but then James (King) came with a bit of a wet sail late on and we couldn’t do any more.”

David Maxwell, rider of third home Cat Tiger, commented: “That was awesome, he’s a lovely little horse. He jumped like a bunny and made a mistake about five out, but he’s jumped brilliantly other than that and just hasn’t quite got home. He possibly just used up a little bit of juice that he needed (with that mistake), but that was brill.”

Trainer Paul Nicholls added: “He ran very well. He made a horrific mistake at about the fourth-last which obviously didn’t help his cause and he probably got there a bit soon after tanking. David was brilliant though and next year that will be his sole aim.

“I said to him that slower ground will help a little bit as he was nearly flat out most of the way and then he’s got into it really well and he’s the sort of horse that will give David a good spin for the next couple of years. He’s bought him for this race and next year we’ll go down the same sort of route and that was just a super run.”