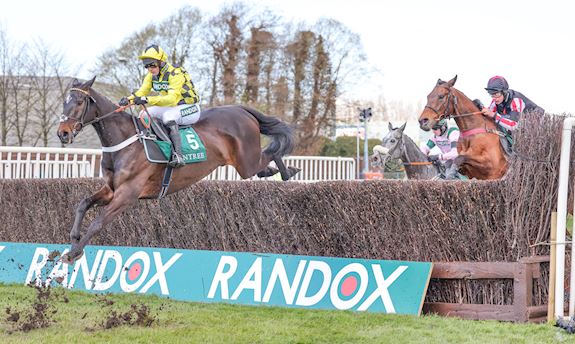 Nico de Boinville praised Shishkin’s versatility after winning the Doom Bar Maghull Novices’ Chase, but admitted: “I had to do all the donkey work.”

The seven year old went off the 1-8 favourite having won the Sporting Life Arkle Chase at Cheltenham last month. But he was made to work hard for his victory by Funambule Sivola, who was bearing down on Nicky Henderson’s superstar after the last fence.

After securing the three and a quarter length victory to maintain his unbeaten record over fences and win a second Grade One chase, de Boinville told ITV Racing: “We were going very steady anyway and the one thing that Shishkin does is that he stays and I wouldn’t want to turn it into a sprint really. So he’s certainly versatile like that, but I certainly had to do all the donkey work there anyway.”

Asked what he feels the horse’s best trip will be as he gets older, Nico replied: “At the moment, he’s doing everything we ask of him at two miles, so why fix something that’s not broken? Off a stronger gallop, he’s only going to be better. Look, I think he was just idling going to the last there and I think he would have picked up again, which he did.

“I think the way the race was run at Cheltenham, it was a hard-fought two miles, they went a really good gallop and that’s probably where you saw him at his very best, where he was able to stay on at the end. Whereas today, like I said, I’ve had to do all the donkey work, go and find those jump. I thought he was very slick.”

Asked how tough a horse needs to be to win at the Cheltenham Festival and then at the Randox Grand National Festival less thann a month later, trainer Nicky Henderson said: “It is always quite difficult. The first week is easy as you give them that bit of time off.

“They tell if you are well and it is how much to do in the meantime. The boys have done great and they have got them back in pretty good nick and they have done what they have had to do. They are very good novices. It is nice to go to bed with a couple of youngsters like that which have had nearly perfect first seasons over fences and it gives us a lot to look forward to.

“I think as Nico said there was much to give him an early lead and he could have really done with some help. Gumball usually goes a solid gallop but he just felt he had to push things along a little bit.

“He is a very laid back horse. Of all those two milers he doesn’t show that speed at home. He is laid back about life and has a wonderful temperament. I suspect he was getting quite lonely. He just had to fiddle the last, but otherwise his jumping is quite quick and economical.

“I just don’t think he was doing a lot at the end but fair play to the second horse he has run a huge race. It is amazing how quick he gets to the other side of a fence. He is not hurdling them but it is a very effective technique, it’s a different one. He takes off and lands before you can hardly notice it. There is Punchestown but we won’t try that at this stage of his career.”

Asked if he will be preparing Shishkin for next season’s Betway Queen Mother Champion Chase in the same way he has other horses in the past, Henderson responded: “You would like to think so. He will have to go down that route and start at Sandown. If they meet (Shishkin and Altior) they will have to meet. It is nice to have that problem and the youngster come along. It’s amazing they have gone from Sprinter (Sacre) to Altior to this fellow.”

Venetia Williams, trainer of runner-up Funambule Sivola, said: “For one brief moment I thought we had a chance, but we mustn’t kid ourselves - a horse like Shishkin is going to frighten away strength in a race like this, and everyone bar Nicky Henderson was coming here trying to win the prize for the second.

“That was our race, and we won it, but as I said, for a brief moment I thought we might beat Shishkin. I’m thrilled with what he’s done this season and it’s nice to be able to come here with a horse like him. He started off as a disappointing novice hurdler last season, but even though he’s not big we always thought he’d make a chaser.”

Jockey Charlie Deutsch added: “Turning in I knew my lad would keep the gallop up and all I needed was for Shishkin to fluff a couple and we might get there. I needed Shishkin to come back to me and when I winged the last I thought we might get him if he just tied up ever so slightly, but not quite. He’s a real professional though, and he’s pretty decent.”

Trainer Philip Hobbs said of third-placed Gumball: “He’s run fine and the main thing is that he has jumped well. He wants better ground and we’ve been waiting for that for a long time really.

“I suspect that’s it due to a lack of options - there’s a two-mile handicap chase at Ayr next week but I suspect that could come a bit soon. He might well run in a Flat race next month because he’s nicely handicapped and there isn’t much to go at jumping wise.”

Jockey Tom O’Brien added: “Gumball ran well and he jumped great. He has made errors in the past but he jumped well today.”