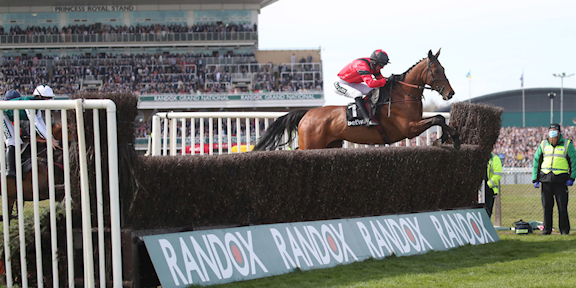 Ahoy Senor (4-1) scored at Grade One level for the second year in succession at the Randox Grand National Festival when triumphant in the Betway Mildmay Novices’ Chase (3m 1f).

The seven year old landed the Grade One Sefton Novices’ Hurdle a year ago.

Trained by Lucinda Russell and partnered by Derek Fox, the seven year old scored impressively by five lengths from Fury Road, with 11-8 Favourite Bravemansgame finishing fourth of the four runners.

Winning trainer Lucinda Russell said: “At Cheltenham he actually learnt what he was supposed to be doing, and he just showed it today. This is a fantastic way to end his novice season.

“When he goes left-handed he jumps slightly right, and when he went right-handed he jumped slightly left, so it’s just his way of sorting things out for himself. He’s got so much power, you see the way he jumped the last fence.

“Derek knows him inside out and rides him all the time at home. After Wetherby and Cheltenham Scu said what a fantastic horseman he is, but he really is - he knows the horses inside out and it really helps, because he rides them at home, he lives and breathes them, and has got such a great idea. He may not be the easiest for the press to talk to, but he’s so good with the horses; his whole world is horses. He’s already planned out this horse’s season - you can guess, but it will end up with the Gold Cup. I hope so anyway; God willing that he is all fine after today. It’s the dream again, isn't it?

“I love Aintree, always have done. It’s magic - when I drove in yesterday, I can’t help it, you feel the spirits of everyone past and present. It’s a lovely place.”

Russell’s partner Peter Scudamore: added: “They say Superman is no good without kryptonite. This horse makes the odd mistake; I thought he only made one mistake, basically, at Cheltenham. You are dealing with an elite athlete; I just wanted him to prove it. That’s why I get emotional about it. He’s as good as I’ve come across. I’m not talking about Carvills Hill or Granville Again… I don’t see him as Carvills Hill at all. He jumps right - I remember another good chaser I rode called Young Hustler, who’d go left on a right-handed track and right on a left-handed track; I think he finds himself room. He’s just getting it together. I think perhaps he is better on good ground. He’s by Dylan Thomas, and Paul McKay who does our form for us tells me that Dylan Thomases want better ground, which works for the big races, doesn’t it?

“The extra distance for the Gold Cup won’t be against him. We are small fish amongst big fish; dealing with a horse of this nature is an immense privilege.”

Successful rider Derek Fox said: “He has been ultra-consistent all year and has been very impressive. It is great for him to go and win again today.

“He was very impressive around here last year and he didn’t have an awful lot to find with the big two. It looked a good race on paper and he has done well to win the way he did.

“He is still learning on the job but he has loads of natural ability and he kept galloping away. It is brilliant.

“He is an unbelievable horse and I feel very lucky to be riding him. He is the best horse that I’ve ever ridden.

“He didn’t lose anything in defeat either at Kempton Park or Cheltenham. He ran two serious good races. It is like everything if you keep them sound and in one piece you can get it back.

“I hope he can develop into a Gold Cup horse and I’d be very excited to ride him in it. I’m looking forward to the future with him.

“If I’m there I ride him most days at home. He is very well looked after and has been very well campaigned by Lucinda Russell and Peter Scudamore. We are very lucky to have him.”

Don Constable, who bred Ahoy Senor, said: “He’s probably the best horse I’ve bred, I’d love to say that now though I’ve some had some really good horses over the years. I’ve bred Kruzhlinin and Cloudy Too but this one is probably the best, what a great horse. I’ve won a point with him and the mare (Dara Supreme) is in foal and she’s due to foal anytime. If you’re watching in Ireland, look after that mare for goodness sake!

“I always thought I’d be really cool (watching the race) but I’m not, I’m full of it and I don’t know what to say! I sell dreams, that’s what I do!”

Jack Kennedy, rider of runner-up Fury Road, said: “I was delighted with him. He ran a great race and was just beaten by a very good horse in a very strong race.”

Venetia Williams, trainer of third home L’Homme Presse, commented: “It’s horses for courses. I’m not going to take anything away from the winner, who put up a blistering performance, but this was more of a speed test today than even L’Homme Presse’s two and a half mile races. I’m very happy with the way he’s run at the end of a busy season, and I’m delighted for Lucinda.”

Paul Nicholls, trainer of the fourth Bravemansgame, said: "He hasn't run his race. It was the end of a long season, I suppose. Harry said he was very keen going down and very keen in the first part of the race, he wouldn't switch off. If he'd have jumped the second-last upsides and got beaten I'd have thought 'fair enough' but Harry said he was beaten turning in. I haven't been hiding it, some of ours have been disappointing in the spring, some have run well and some haven't and that wasn't his true form. With a good summer out he'll be back next season."