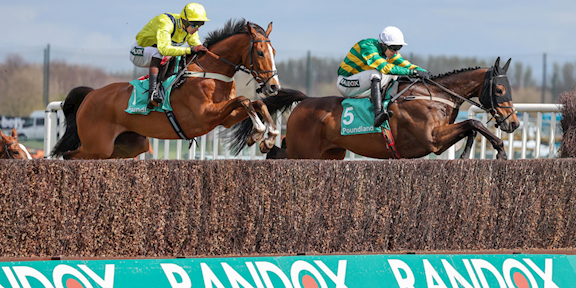 Gentleman De Mee (7-2) caused something of an upset in the Grade One Poundland Maghull Novices’ Chase (2m), defeating 4-7 favourite Edwardstone.

The winner was owned by JP McManus, who was inducted into Aintree’s Hall of Fame as a Grand National Legend earlier today.

The Willie Mullins-trained six year old won by four and a half lengths under Mark Walsh.

Trainer Willie Mullins said of his winner, Gentleman De Mee: “He was in great order. I was just hoping that Alan’s (King) horse (Edwardstone) would be feeling the effects of Cheltenham and that’s probably what happened.

“He was working very well, but you don’t think you’re going to come and beat the Arkle winner. We were fresh coming here, and we thought our freshness might be the right card to play.

“Mark (Walsh, jockey) was very good on him, too, got him jumping, gave him a breather, I think, when he made a mistake, and let him think he was in charge.

“He loves being forward in his races and being left to do what he wants to do. Early on in his career we probably held him up and it didn’t suit him. Now it will be the default, but he sort of settled today, I think, in front.

“Mark gave him a fantastic ride and we’ll find out from him what he thinks the pace was.

“He’s just improved in the past six weeks or so, which is probably due to the change in tactics and getting him confident in his races, rather than getting held up and being beaten early in the season. He’s probably just maturing and growing into himself - he’s a big horse.

“We’ll see how he comes out of this - we’ll see about Punchestown. Yes, I think the Champion Chase is a realistic aim for the future, rather than the Ryanair.”

Winning jockey Mark Walsh told ITV Racing: “He's brilliant. He's a very forward-going horse. We tried to hold him up in his first few runs and it didn't work, so we just let him make the running and it suits him because he wings fences and he just loves to get on with it.”

Later, in the winner’s enclosure, he said: “It was all very plain sailing. He got out in front and winged the fences. He only missed the fourth last but it was a good performance from him.”

Asked if there had been any moments of concern, he replied: “Not really. I tried to get a breather into him at the fourth last and he just rushed into that a little bit and he got in underneath it but apart from that he jumped really well.

“He is learning now and he was very free at the start of his career and he is still very forward going but he just likes to get on with it and that seems to work for him. He is learning with every race he runs in.”

Alan King, trainer of second placed Edwardstone, said: “There’s no hard luck about it. On the day I think we’ve just been beaten by a better horse.

“I said during the week that the one horse I was scared stiff of was JP’s (the winner, Gentleman De Mee). He’s only 3lb below me in the ratings and he’s probably come with an easier prep. We’ve done everything right and just weren’t good enough. I’m not sorry we’ve run.

“Tom (Cannon, jockey) thought at the second-last we might have a chance, when the winner slightly missed, but then he picked up again. If you look at Dan’s horse (third-placed Third Time Lucki) I think he’s run his race. I think the winner is probably a very good horse as well, and maybe a fresher horse.

“I would think we would want to stick at two miles for the time being and maybe start him off next season in something like the Schloer.”

Dan Skelton trainer of Third Time Lucki (9-2) who finished third, said: “It was a good run, the three times we’ve been beat this year we’ve seen the back of Edwardstone and he’s won an Arkle so no grumbling.

“We’ve had a good first year over fences and we’re going to work hard over the summer and work out how we’re going to beat him next year. It’s not going to be easy and Gentleman De Mee got a great ride I thought, so it’s a good race.

“I’d have preferred not to have banged the cross fence, but that’s sport and it happens. He’s had a great year, won three and picked up two Grade Twos so no grumbling from us.”