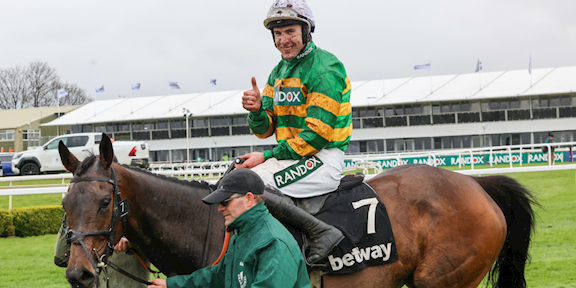 Star mare Epatante scored at Grade One level for the seventh time in her career to land the Grade One Betway Aintree Hurdle.

The JP McManus-owned eight year old was returned at 2-1 and came home 14 lengths to the good from Monmiral in the hands of Aidan Coleman.

Winning trainer Nicky Henderson said: “She’s on top form. She deserves it and she’s done nothing wrong all year. She ran a super race at Cheltenham and JP (McManus) said at the beginning of the season that our main aims would be the Fighting Fifth and then the Christmas Hurdle.

“Those were our golden eggs and we halved one and won the other, which you’d settle for. We then had a crack at the Champion Hurdle and she was an honourable second, so she’s massively improved on last year.

“There definitely was a concern about the trip coming here. When we walked off after the Christmas Hurdle, I said to JP that I wondered if she’d get two and a half miles, so she could potentially switch to the Mares’ Hurdle and avoid Honeysuckle.

“She’s just all speed but round here it is all about speed, so that’s probably what helped her. I might well try her over two and a half miles on a stiffer track, but we’ll think about it. She’s in at Punchestown anyway - I’m not saying if she will or she won’t.”

Asked about plans for Punchestown he added: “They are almost certainly not in my hands. I said to Michael Buckley (the owner of Constitution Hill) that we’d sit down next week and probably have a very good lunch and a couple of bottles of wine to make the decision!

“I would be all for staying in novice company personally, but there you go. On the stats and facts of what we saw at Cheltenham, he’s quite entitled to take Honeysuckle on so we’ll see.”

Asked about other yard stars, Henderson added: “It’s sad about Shishkin but he’ll be alright. It’s a very complicated injury but there’s no reason why he shouldn’t be back next season.

“I’ve been done again (in the Grand National) and I fancied Caribean Boy too! He’s the first horse that I’ve had for about 15 years that I really thought would have a chance, I really did and I cried last night. He’s only pulled a hamstring so he’ll be OK.”

Winning jockey Aidan Coleman said:“She’s a high-class mare and it’s been a great training performance by Nicky for the whole season. I didn’t ride her any differently really over the longer trip because you can ride her any way you want. She’s so good that you can do anything you want on her.

“She had a lovely run through and she jumped well. She was travelling well when we were left alone at the last, and it was a super performance.

“She’s won Grade 1s left-handed at Newcastle, right-handed at Kempton, a Champion Hurdle left-handed and undulating, and now this. Whatever you want she’ll do it. She’s just very good.”

Winning owner JP McManus commented: “It was a great performance by Nicky to have her in the shape she was in today after the Champion Hurdle. I’m very pleased.

“I don’t know that she’s had too many issues, but she met one too good in the Champion Hurdle. It was great that Nicky got her back and he was very happy with her preparation for the Champion Hurdle and again today. And she’s delivered.”

Paul Nicholls, trainer of Monmiral (2nd), McFabulous (3rd), said: “Both those horses have run well. McFabulous ran a blinding race. It was probably one of his best his races. He jumped great and he will be fine when he goes chasing.

“He will go to Sandown Park on the final day of the season for the 2m 5f Grade Two hurdle there. Monmiral travelled really well and galloped out all the way to the line but he is next season’s horse to go chasing. He won’t run again this season.

“It has been frustrating for the pair of them as they have both had little injuries and I’d rather have been chasing with McFabulous but he has picked up a few quid today. The mare (Epatante) was always going well and McFabulous is a three mile staying chaser. I can’t wait for both of them to go chasing next season.”

Harry Cobden, jockey of second-home Monmiral, said: “I was delighted with that. He stayed on well - we were probably a fortunate second, because the other horse (Zanahiyr) fell, but he got up OK, which is the main thing. We’re very pleased and he will go novice chasing next season; that’s what we are aiming for.”

Tom Lacey, who saddled fourth placed Glory And Fortune, said: “He has been a great horse for us this season. That was his finale before he goes off for the summer. He ran like a horse that has had plenty of racing so we will give him a good summer and next season we have the option of jumping a fence again.

“He is a great horse and one we are lucky to have.”