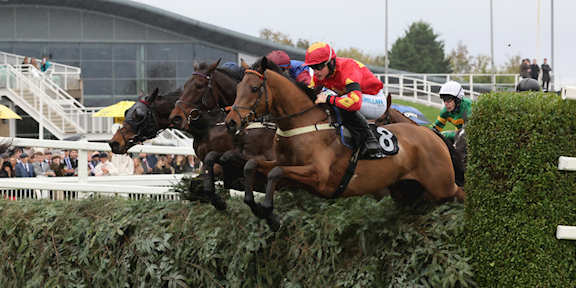 James Bowen has described the Randox Grand National as the race “everyone wants to win” and admits it would be the “icing on the cake” if he could secure victory aboard Kildisart at Aintree on Saturday in front of his parents and girlfriend.

The 21 year old jockey will attempt to make it third time lucky in the world’s most famous steeplechase after receiving the call-up to ride the Ben Pauling-trained 10 year old in the £1 million showpiece.

Having already equalled his previous best tally of 72 winners, which was set in the 2018-19 season, the Welsh-born rider now hopes he can crown what has been a fantastic campaign with victory on the Simon Munir and Isaac Souede-owned gelding.

While Bowen is sure to have a number of those packed into the Merseyside track rooting for him to taste victory, none are likely to be cheering him on as loudly as his mum and dad Peter and Karen Bowen, and his girlfriend of 18 months Niamh Mason.

Bowen said: “Mum and dad wouldn’t miss the Grand National, while my girlfriend Niamh will be there too.

“They (mum and dad) love the Grand National as do I. It is the biggest race and the one that everyone wants to win. I don’t think you can compare it to anything else really.

“I think it would be the icing on the cake for my whole career, not just my season, if I win the Grand National as I don’t think it will get any better than that.

“In my previous attempts I pulled up on Shantou Flyer and was ninth on Outlander, so I’ve had a couple of good spins.

“They were outsiders really, as is Kildisart, but in a race like this you always keep your hopes up. He is definitely the classiest horse I’ve ridden in the race.”

Despite Kildisart having to overcome a 462-day lay-off ahead of his seasonal comeback when fourth in the Grade Three Greatwood Gold Cup at Newbury last month, Bowen insists it was a performance that exceeded expectations.

He added: “We were going out there the last day with an open mind. We didn’t think we would win the race, but even if he pulled up we would probably still have run in the Grand National.

“For him to finish fourth was pretty encouraging. He stayed on from the back of the last really well. He exceeded my expectations.

“It was quite nice to sit on him the last day and get a feel for him. That was over two and a half (miles) but it is a completely different situation to what the Grand National is going to be.

“It was the perfect prep run as he took a blow, but he stayed on. He was probably quite eye-catching to a lot of people. He will have to come on for that run but I think he will do.“

Like a number of his rivals Kildisart is yet to tackle the famous Aintree fences or race over the extended four and a quarter mile trip. However, Bowen believes that his previous big race experience will stand him in good stead for his latest assignment.

Bowen said: “He stays well and has run well in plenty of big handicaps. He was seventh in the Ladbrokes Trophy, second in the Ultima.

“Jumping wise he jumps fine. He is not an extravagant jumper, which is perfect for those fences. He has got a good level of ability and has that experience in big handicaps which helps.

“When you have run in these big handicaps at Cheltenham and Aintree before and been able to finish pretty close in those races it is a massive factor and you need that coming into a Grand National.

“Daryl (Jacob) schooled him over the Aintree-style fences and he looked good, but it was never going to be a problem for him.”

Bowen is already a winner over the Grand National course this season having steered Mac Tottie, who is trained by his dad Peter, to victory in the Grade Three Betway Grand Sefton Handicap Chase back in November - a victory he believes is a plus mentally.

The 2017-18 champion conditional jockey hopes he can now replicate that success aboard the nine year old on Friday 8th April in the Grade Three Randox Topham Handicap Chase.

He added: “I think it does help having won over the National fences already this season.

“You get some jockeys that have a good record over them and some that don’t. That is probably nothing down to the way they ride over them, just the horses they are on.

“Mentally it does make a difference when you do get a winner around there. Hopefully Mac Tottie will run in the Topham as well. I’m just waiting on what Nicky Henderson does, but hopefully I will be able to ride him.

“He will have a very light weight and I’ll probably do the lightest in three years, but I’ll give it a go.”

Before tackling the Grand National fences, Bowen will join forces with his old ally Mister Fisher, who he insists would instantly become his “favourite” horse if he could provide him with a breakthrough Grade One victory in the Marsh Chase.

He said: “I’m booked to ride Pats Fancy, who is a nice horse, in the Mildmay Novices’ Chase on Friday and I’m also on Mister Fisher in the Marsh later on the card.

“He ran well at Ascot the last day on soft ground and he got pulled out of the Ryanair, which was the right thing to do as it ended up going soft.

“There is rain forecast but hopefully it won’t get much worse than good to soft.

“If the ground is like that it would give him a decent chance as he is a two stone better horse on decent ground. I think people do overlook him as all of his bad runs are on worse ground.

“He has never had a chance in a Grade One like this on better ground. He has got a high rating and off ratings there is only a few pounds difference between him and the favourite (Fakir D'oudairies).

Whatever Bowen goes on to achieve at Aintree this week he looks set to reach his ultimate target this season of riding 75 winners in a campaign, a milestone he believes can help continue propelling his career forward.

Bowen concluded: “I was speaking to Simon Munir at the start of the season and we decided I should target 75 winners and we are going towards that.

“My previous best was 72 and that was very good compared to what I have done the last two seasons.

“The number 75 was a target at the start of the season and I’m not far away from it now, so it would be great to reach it.”