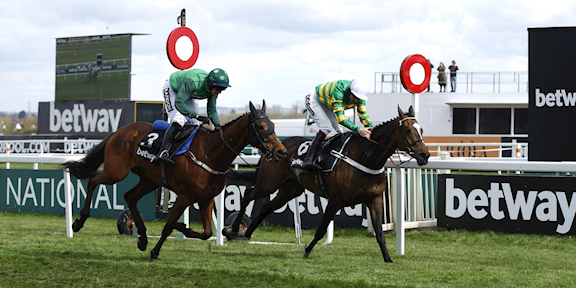 It was a second win at the 2022 Randox Grand National Festival for owner JP McManus, trainer Nicky Henderson and jockey Aidan Coleman following the victory of Epatante in yesterday’s Grade One Betway Aintree Hurdle.

Six year old Jonbon was returned the Evens Favourite and held off the strong challenge of El Fabiolo to score by a neck.

Winning trainer Nicky Henderson said: “He gets excited but so do a lot of horses but we mind him because it is sensible. He has had a great season. Constitution Hill is the only person to lower his colours but you can’t take that out on him as he is unbeaten otherwise and he has finished up getting his Grade One here which is great. I’m pretty certain he will go novice chasing next season. He will get further, I’m sure he would. We had him in the two and a half both at Cheltenham and here but we felt we could stay at two.

“It is not a consolation prize as he deserves it as he has done nothing wrong all year apart from bump into what might be an extraordinary horse that luckily lives in the same place, so from that point of view (defeat at Cheltenham) was less painful for us than the Jonbon team.

“All the same it is lovely to have two horses like that. They are both very exciting and you couldn’t have better.

“There is no doubt the second horse is a very good horse and they pulled a long way clear of the third. He hasn’t been in any battles as he has had it fairly easy. That is the first time he has really had to put his head down and fight and he jolly did. That is why you loved him.

“You can criticise him because he gets a bit sweaty or a bit buzzy but that’s just him - he enjoys it. He has done everything right today but we have a way of handling by having the ear plugs down to the start then they come out and all sorts of things, but we are getting the hang of it.

“He has got progressively better because he is getting to the end of the season. He has grown up a lot and that was the first time he had to get into a proper dogfight as Constitution Hill went straight past him and that was game over in a matter of strides.

“That will definitely be the end of his season as he would not want to go to Punchestown. He will almost certainly go chasing and Aidan (Coleman) said wait until he runs in the Arkle.”

Successful jockey Aidan Coleman said: “That was super. I got a very easy ride. Jonbon jumped, he travelled, and he saw it out well. We got left in front plenty soon enough, but fair play to him he didn’t let me down. He’s tough, he’s genuine and he’s a good ride, so very easy from my point of view.

“It was no surprise to me he’s so genuine. I’ve ridden a lot of horses in my life and I knew from day one with this fellow that he was never going to let me down on that front. It’s taken until now to show that side of his character to you guys (because his wins were so easy and then his first defeat was so comprehensive), but I knew from the back of the last he wasn’t going to let me down.

“He goes on any ground, he stays and he jumps, so whatever they want to do with him I’ll be delighted to ride him.”

JP McManus, owner of Jonbon, added: “I think he did very well to win today. He showed great resolution and I don’t think he’d have any problem going a little further. I thought Aidan gave him a very good ride.

Willie Mullins, trainer of runner-up El Fabiolo, said: “A real good run. We got a little bit of interference after the third-last, which we don’t know whether it cost him the race or not,  but certainly Paul [Townend] had to use up petrol to get back into the contest. We’re very happy with his run, beaten by a good horse. We’re looking forward to his novice chasing career. He got two little nicks on his front leg; he might get to Punchestown, but we’ll see.”