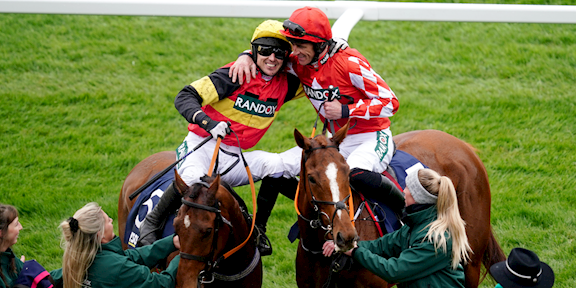 The 14-1 chance initially dead-heated with 10-11 Favourite Pied Piper, but was announced the clear winner when the stewards ruled that Pied Piper had interfered with Knight Salute after the final hurdle.

Winning trainer Milton Harris said: “I’ve not had a chance to watch it properly, but I was stood down by the winning line and it doesn’t sit easy with me the result as they’ve had a good battle.

“Paddy (Brennan, winning jockey) asked me what would I like I said just leave it as we don’t want to fight for that, as both the riders and horses deserve credit. I was happy with the original result but the stewards’ have a job to do.

“Nothing went his way at Cheltenham and Paddy has probably won the race today as he was easy on him at Cheltenham when he was beaten. Today we tried a few different things but back on a flat track and with a fast pace helped. He is a hardy warrior.

“Coming down to the last I fancied him and when he has given him a bump that has probably helped him. Before today we were thinking of going to America for one of their valuable four year old hurdles but I don’t know if that is still the case.

“We will talk among ourselves and see how we get on. He has got a Grade One penalty now so it won’t be easy next season, but we will enjoy today.”

Gordon Elliott, trainer of Pied Piper, said: “Davy didn’t say much, he said he hit the front a bit too soon and if he had the time back he’d have taken his time more. He followed Mark (Walsh on Brazil) as he looked the one to beat and as he went by him the horse in-front (Inca Prince) idled and was pulled-up.

“I’d have taken a dead heat in a Grade One any day of the week, as we’ve hit the crossbar a lot over the past few weeks. Full credit must go to Milton Harris and his team, they’ve done a great job with their horse and our team did a good job with ours.

“He’s raging with himself (Davy Russell) as should have taken his time more and we were following the horse we think we need to beat but that’s horseracing. He ran a very good race and we’re happy about it. He’ll go straight to Ascot now on the Flat.

“We knew we hadn’t much from Cheltenham to here, but we’ve been having seconds and thirds, I’ve just spent the last two weeks pulling my hair out! The horses have been running well, it’s just frustrating when you’ve got the standards that we have – you want to have more winners.”

Padraig Walsh, trainer of third-placed Brazil, said: “No, that wasn’t quite what we wanted, but we’re delighted with the way he ran. He’s a lovely horse to have. We haven’t discussed any future plans - yet we’re just pleased with him today.”