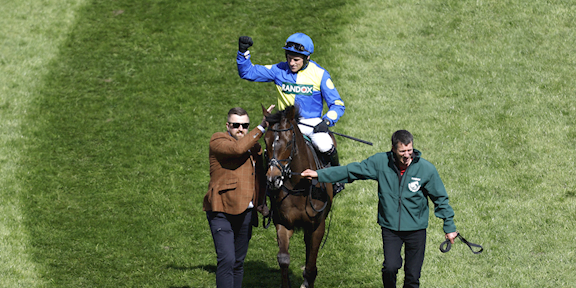 The six year old scored by a length and three quarters from Fils D'Oudairies for the combination of trainer Dan Skelton and his brother jockey Harry Skelton.

Winning trainer Dan Skelton said: “This horse was well-handicapped - we knew that from Galopin Des Champs and he picked up a bit of an injury at the start of the year that meant we couldn’t get going with him.

“He needed that run at Taunton badly, but then we obviously wanted to try and win the conditionals’ race (the Martin Pipe Conditional Jockeys’ Handicap Hurdle at The Festival), and I was actually angrier when we got beat by Galopin Des Champs (in the same race in 2021) than when we got brought down at the second (this year), because Galopin Des Champs - how was he there to beat us that day, you know what I mean?

“He was clearly a Grade One horse in a handicap. But being brought down - that’s sport, you’ve got to shrug it off and get on with it. He’s made amends today; we always felt he was well-handicapped, and he’s entitled to get a bit better than last year, because as he’s getting older he’s getting stronger. He’s tiny but he’s just getting a little bit more mature.

“I was stunned when he was dropped 3lbs in the handicap, but I think it’s appropriate. We benefited in this instance, but I think it is appropriate, what the British handicapper has done this year and reassessed the whole herd, especially the novices, and set them at a lower mark, because it was clear from the year before that we were either as a herd way too high, or the Irish were so far in front of us, not just with quality, but also with the quantity of handicappers, so he got dropped.

“Would the 3lbs have made a difference today? Not a jot. No one’s been unlucky or lucky; it’s just the way the system works now. I don’t want to use the word fair, it’s just more equal. Sometimes it neatly comes together, and it has today.”

As for future plans he added: “I’ll see how he comes out of it. Colm (Donlon, owner) has grand ambitions with his horses - we work from Cheltenham backwards.

“He can’t be here today because he’s busy working and that’s why Cheltenham is so important to him, because it’s the only four days he can get off apart from family holidays, but we’ve got grand ambitions for his horses.

“We’re trying to make them Graded horses - so I think, all things being equal, we’ll throw the dice at that Select Hurdle at Sandown in two weeks, then next year, if it’s appropriate, we might even start at something like the West Yorkshire Hurdle, and go from there.

“He won’t jump fences - he wouldn’t see over one! Although he would jump one, because he’s got the heart to do it, but he is small; he’s tiny.

“My agent Ryan Mahon bought him as a foal; we loved the breeding, and everything else - Colm bought three at the time, and we were jogging them round as three-year-olds one day, and I said to Colm, ‘Look, you’ll have to get your money back on this one - he hasn’t grown from a foal’, and he said, ‘Don’t worry about that, if they’ve got the heart for it, they’ll run’, and he’s turned out the best of the three by a country mile.

“The horse has got a phenomenal attitude on him and I’m chuffed to bits.”

Winning jockey Harry Skelton said: “He’s like a little motorbike and I had a dream run round. He’s not very big, but he thinks he is and he’s got a good will to win.

“He’s been a bit unfortunate, getting beaten by a good one at Cheltenham a year ago (subsequent dual Grade One winner Galopin Des Champs) and then being brought down there last month, but everything happens for a reason and we’ll take those beatings on the chin. You get a bit of bad luck in racing - that’s sport - but you just get back up and go again.

“I must say though that Dan has done an unbelievable job, along with our head girl Amber Blythe who looks after her. He had a bit of a hold-up before Christmas, with a little injury behind, and our backs were against the wall a bit, but Colm (Donlon, owner) has been very patient. We put all the pieces together and it’s all come right.

“In time he might just be a bit better than a handicap hurdler.”