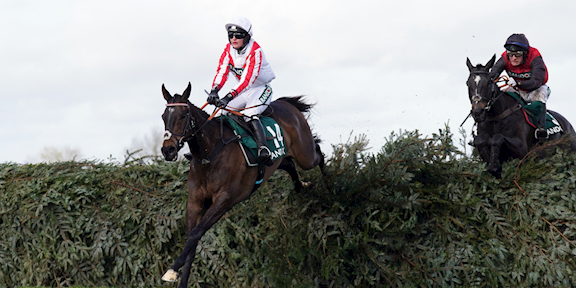 Latenightpass (7-2) went one better than in 2021 to land the Randox Foxhunters’ Chase.

The nine year old is trained by Tom Ellis and was ridden to success by his wife Gina Andrews. The pair came home a length and a quarter clear of Cat Tiger.

Winning trainer Tom Ellis said: “He is a family horse. Dad and I got bored while mum was away and we went to see a neighbour who had the mare (Latenightdip) that he is out of and we gave them either £1,800 or £2,000.

“I rode her a few times, then she got injured and he was the first foal we ever bred. We have literally done everything with him from the word go. I can’t tell you what it means. It is magical. We came so close last year.

“I’m great mates with Dan Skelton as we went to school together and the first thing he said to me is ‘don’t go to Cheltenham next year as you will win’ (this race). What a piece of advice!

“To be honest we felt we left our Aintree race at Cheltenham last year. To come here fresh this year has definitely paid off. I can’t tell you what this means. It is amazing.

“We are lucky enough to have lots of winners point-to-pointing every weekend and Gina rides them all but to see your wife win the race of her dreams on a horse you bred and trained is amazing.

“It is as emotional as I’ve ever been. I’m speechless to be honest. I’ve got a brilliant team of staff and we are very lucky with the people we have supporting us behind us. We’ve got a fairly sizeable operation now and it takes a lot of managing and without Gina I couldn’t do it and without me she couldn’t do it.”

Winning jockey Gina Ellis said: “It’s an absolute dream come true.  I had the most fantastic ride off him - he jumped brilliantly. He took to the fences really well last year and you’re always a bit dubious as to whether they are going to like it again or not, and he definitely liked it!

“He’s such a nimble, agile jumper - by no means scopey, just agile and nimble. I was having a chat with Izzie (Marshall, jockey on Clondaw Westie) going to Bechers, and I said, ‘are you alright?’ She said ‘I think so’, and then she went at the Canal Turn. I hope she’s ok.

“He’s not one to find much and he can be a bit lazy in front. I was very keen not to commit too soon - I didn’t want to commit until I got to the Elbow, which I didn’t really have to.

“David (Maxwell, jockey on Cat Tiger) got close enough just to keep pushing me along, and I kept looking up, praying for the winning line, and luckily it came soon enough.

“It’s everything (winning this) - as much work goes into a point-to-point yard as a National Hunt yard. We’ve got a great team at home and they work really hard, and I’m just glad that it has all finally paid off. This is the biggest one of all and we’ve won it.

“It’s everything I’ve ever wanted. I’ve ridden a Festival winner, which was all I ever wanted, and for a long time now I’ve said this is the race I’d love to win. Dad (Simon Andrews) won it so now I’ve got one up on him again!

“I don’t think I was born when Dad won it. It’s brilliant - I’m so pleased. It’s a real family affair - my husband Tom rode this horse’s mother in races and obviously my mother-in-law bred him; we’ve got his sister at home and two other brothers as well. It’s a fairytale, really.

“After last year we thought perhaps Cheltenham took the edge of him, so we thought we’d come straight here. And he doesn’t quite see out three miles and two furlongs round there, whereas two miles five is perfect for him. He was a fresh horse and it paid off.”

Pippa Ellis, mum of the trainer and owner of the winning horse, said: “There are no words. It is such a special thing and such a special day. I bred him. He was born nine years ago when Tom only had his only ride in the Foxhunters’.

“It is almost meant to be. He ran so well last year. To breed him, for Tom to train him and my daughter-in-law to ride him it is the stuff of dreams and I’m very lucky to be part of it. To be honest I didn’t watch an awful lot of it as I hid behind a lot of people. He loves his job and jumps and he travels and he so deserves that. He is not very big but he doesn’t know that.

“He did fall at Alnwick the time before last which is so unusual but the jockey blamed herself and I don’t know what went on but it was one of those things - but he was so good out there today. This is all down to Tom and Gina, and the team at home and Kim who looks after him.

“The first day Gina rode him and he won his maiden she said he will win you some races. Everybody said you must be so confident but can you be confident in a race like that. You need a lot of luck and to stay out of trouble. I hoped he would run like that. It is the stuff of dreams and what has kept me awake all week.”

Paul Nicholls, trainer of second placed Cat Tiger (8-1), said: “We thrilled with him. He ran really well and it was a fantastic ride, we were just unlucky. He had a big chance jumping the last and just got outstayed from the Elbow really, so it was a fantastic run.

“It was a great ride - the idea was just to be in the first four and just save as much as he could and try and have one last go late on – because last year he probably got there soon enough. He did all that but the other horse just kept on finding.

“It’s a great result for the hunter chase guys (the Ellis family) - they deserve it and David just loves doing it. I dare say next year we’ll just train him for this again.”

David Maxwell, rider of Cat Tiger in second, said: “He is a lovely little horse and it’s no shame to get beaten by Gina, she’s one of the best jockeys riding and I did think coming to the Elbow, ‘Oh God it’s Gina, I’m never going to get past her!’

“At 43 I’ve still got a few years left and if I’m getting better that’s a good thing isn’t it? Maybe I’ve another 10 years in this! It’s great and it’s lovely that the Andrews family have won. Their roots are in point-to-pointing and they’re a great family of jockeys and trainers so it’s lovely to see them win.

“I just need to get into that winners’ enclosure just once before I die!”

Will Biddick, trainer/rider of third-placed Porlock Bay, said: “He was flat out, but the standing start didn’t help as it just took him a while to get into gear. He’s a year older, and it’s sharper round here than Cheltenham, but his jumping was impeccable and that’s what kept us in it.

“Dropping my whip made no difference as he was still trying for his life and he did run to the line, which he didn’t do at Bangor before we sorted out the internal things.”

Ben Pauling, trainer of fourth-placed Le Breuil, said: “He was left last at the start and it was catch-up from there onwards, but the way he finished was great. He’ll come back next year.”