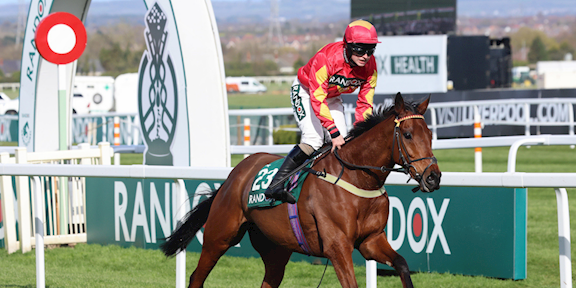 Bowen was previously successful with Dunbrody Millar (2007) and Always Waining (2010, 2011 and 2012). Nicky Henderson has also trained five winners of the race.

Mac Tottie is a previous winner over the Grand National fences, having taken the Betway Grand Sefton Chase back in November.

The 8-1 chance scored by four and a quarter lengths from Batcio in the hands of the trainer’s son Sean.

Winning trainer Peter Bowen said: “He’d love that ground, and everything was just right for him. This has been the plan since November [when Mac Tottie won the Grand Sefton Chase]. He went off the boil a bit after that fall in the Becher Chase, but he’s come back spot on for today. I don’t know what it is about this place, but I love it, anyway! He just loves those fences. That’s our fifth Topham Chase win, thank God. We could do with a National now.

“Our horses do a lot of loose-schooling at home, which helps them [jump well]. It makes them more accurate, you know, and very clever at their fences. He had a little session of loose-schooling two days ago, and he was brilliant. He was in good form coming into today.

“If he gets the trip, he might be a National horse, possibly. We’ll have a look at what happens next year; maybe we’ll have a go next year. He should stay the trip - he’s bred to, fingers crossed.

“This horse was [son] James’s ride originally, but he had to ride Fantastic Lady [who unseated James at the first] so Sean got the ride.”

Successful rider Sean Bowen said: “He is unbelievable. I’m not being biassed but dad is brilliant. When he wants to get one ready he gets one ready. After he won the Sefton it was always about coming back for the Topham. He (dad) obviously enjoys winning the race as that was the fifth time he has won it. James (Bowen) schooled him a couple of days ago and my other brother Mickey (Bowen) always rides him and the last week or so they couldn’t wait for him to run. James was revved to ride him and then he had to ride one (Fantastic Lady) for the boss (Nicky Henderson) and came off at the first. It is lucky that I got him and dad’s other horse (Francky Du Berlais) ran well in fourth. It is a great day.

“To be honest I wasn’t that happy earlier and I nearly got brought down at the first and I missed the second and the Chair and I just wasn’t in a rhythm and I wasn’t really happy. Then he got into a rhythm and I jumped the Canal Turn, switched out and got into a rhythm after that. I put him between horses going to two out and he came alive after that and I couldn’t hold on to him after that. He has gone on to win well and I was making sure up the run in I couldn’t hear people behind me just the crowd.

“You ride any winner it’s brilliant, you ride a big winner its massive but I literally can’t describe to you what it is like to ride a winner for the family it is a lot different and absolutely amazing.”

Ted Walsh, rider of second-placed Batcio, said: “He ran great and ran right up to his mark and maybe a bit above himself. It was great to be involved.”

Adam Wedge, rider of runner-up Batcio, said: “He’s run a mighty race and taken to the fences very well, I couldn’t fault him.”

Danny Mullins, rider of third-placed Annamix, commented: “I had a great spin. He really took to the fences and it’s brought back that bit of spark that he was maybe missing through the early part of the season.

“Hopefully that might rejuvenate him, and there are a few races over these fences through the year. He probably needs a bit of nice ground, but the fact that he really enjoyed that and jumped so well opens up options for him.”