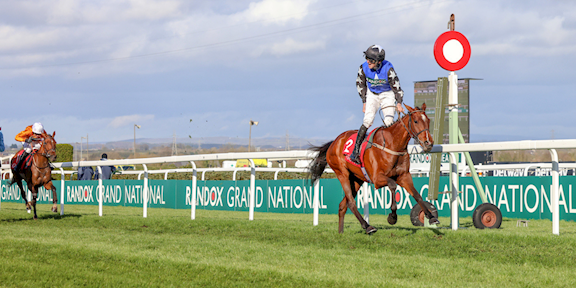 Trained by Willie Mullins, Law Ella was partnered to victory by his son Patrick.

Winning trainer Willie Mullins said: “She’s been doing everything right at home. We were a little worried when we saw the rain coming.

“Paul (Townend) said it was dead enough for Kemboy and I thought it might be too dead for her, but she did it well. To me it looked like she was pulling quite free in the early parts of the race, but Patrick got her settled and sat and sat and sat.

“He said from the turn to home he was worried about something coming from behind him; the ones in front he thought he probably had those covered.

“I thought he was possibly too far back and nothing was going to happen, but he was confident I think that they had gone fast enough that the ones in front wouldn’t be going away from that pace, they’d be coming back to it, and he was right.

“There is a mares’ bumper at Punchestown - it might be a little soon, but we’ll have a look at it because there’s nothing else for her. There’s a good chance she’ll go there.

“In the future, I think she’s got plenty of speed to stay the minimum (two miles), but she’s got the pedigree to go out in trip. The two miles, it’s easier to train them - they stay sounder and it takes less out of them.”

Winning jockey Patrick Mullins, jockey said: “She was working very well coming into this. I was afraid I might have been too far back but when I turned in - I was thinking the dangers are behind me not in front of me.

“She was very good. She was bang there at the Dublin Racing Festival but the ground was a bit nicer today and we thought that would help her improve and it certainly did.

“Willie tried to convince the lads to run her at Fairyhouse last week but the lads stuck to their guns and fair play to them. The lads wanted to come here and James Fenton who runs the Blue Blood Racing Club deserves a lot of credit. She is a little bit hot-headed and she is home bred so I better give my mother some credit as well.

“This is quite a low weight for me to ride at and I thought it might be worth it and you don’t mind doing it now and again for horses like that.”

Aidan Coleman, who rode second placed Law Ella (10-1), said: “She ran really well. She was a bumper winner coming in, travelled well and galloped well and the winner was better on the day.”

Joey Dunne, representing the owner, added: “She ran really well and stayed on well so she’s a very good filly to look forward to. I’d say she’ll get a little break after that now as she’s had a long enough campaign and she’s a great prospect going forward.”

Fergal O'Brien, trainer of third-placed Lutinebella (50-1), said: "She tries hard, and that's a bit of black type for her. Liam (Harrison) thought he might win, and that's probably cost him second. She's a lovely filly for the future."