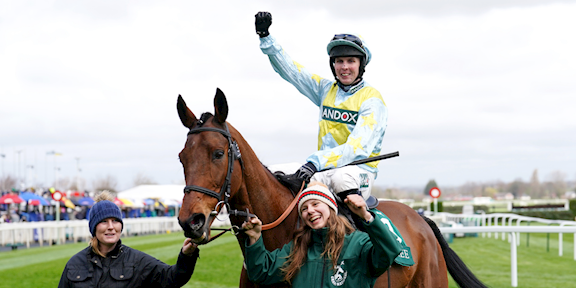 The eight year old was retuned at 7-1 and was successful by 10 lengths from War Lord.

Winning trainer Alex Hales said: “That was fun. It is quite emotional. It is wonderful really. It has taken a long time to get here. It is a massive team effort from everybody. We’ve worked so hard for so long to find horses like this and to do it here is so wonderful. This is a hard game. It is hard to compete at this level and to have winners anywhere. There are a lot of small trainers like us and we are working hard every day.

“To come here on the top stage and do it is great. Sally (wife) and I bred him as well so it is quite an incredible story. I’m just delighted for the team, Sally and Kielan. Kielan and Harry Bannister are our two jockeys and they are having fabulous seasons. I’m just proud of everybody. We owned the mare and we chose the stallion and went to Passing Glance and just believed in him. It is just a fabulous story.

“I thought last year when he was third in the Grade One Aintree Hurdle last year that 80-1 was a silly price. At Huntingdon first time out this season he was brilliant then the wheels came off a couple of times and we got back on track in the Pendil.

“David Fitzpaton, who rides him every day, sadly had a fall on Saturday and he couldn’t be here today and he has been saying for the last two weeks this is the best he has ever been so he was right. I’m looking forward to the replay.

“Kielan was very complimentary, and he couldn’t believe how well he was going and he jumped well. It was frustrating (him unseating twice) but at the end of the day he probably learnt something and he has come out of the other side of it but you forget about that now.

“If you had asked me a week ago he would definitely have won but every minute it gets closer I would have said ‘no he won’t win’, but he just did well and thrived.

“We had a winner on the flat last night which cheered me up and then this fellow today. He is quite cool Kielan. He is too cool for my nerves sometimes. I think I would have gone a stride earlier, but he looked like he did it fairly well.

“He will appreciate stepping up to three miles. I know he is quick over two and a half but he will appreciate a trip and that will open up options next season. I don’t know if he could be a King George horse, that is dreaming. We will just take it step by step.”

Winning jockey Kielan Woods said: “I couldn’t believe how easily he was going. He came up out of my hands two (fences) out, and then I thought I’d definitely win. It’s an unbelievable feeling, that. It’s a bit weird for me because I’m not used to it; you almost feel like you shouldn’t be there. It’s so different - the kind of feeling you wouldn’t mind getting every day!

“I’ve never even won a Grade Two, so to win a Grade One is unbelievable. Alex Hales bred the horse, this man owns him - there’s not many trainers as brave, going all the way from bumpers round Lingfield to winning at Aintree. Top-class, fair play to Alex, and I’m so happy for them - they’ve supported me for a long time. It’s brilliant to be here, and winning is even better.

“I couldn’t really have imagined it (winning at The Festival last month and now at Aintree).

“This horse is as good a horse as I’ve sat on. He jumps, he travels, he’s so easy to ride - you say, ‘come here’, or ‘go on’, one or the other, with the jumping. He’s so much better today left-handed. The last day was different, because he had fallen twice and he needed a confidence-giving run, so we went out with that mindset, to pop around and get a clear round into him and see how we got on, and it definitely paid off today. Wow!”

Colin Tizzard, trainer of War Lord (second) and The Widdow Maker (third) commented: “That was lovely. War Lord ran his race. During the race I didn’t think he was travelling quite so well as he can, because sometimes he tanks, but that might just have been the pace they went. He’s had some hard races this year, but he still had half a chance going to the second-last.

“The Widdow Maker kept going after Millers Bank came by. It was a step forward for him into a Grade On. He surprised us today. We thought he was going to make the running, but then the Irish mare (Gin On Lime, the 5-2 Favourite) got there. He settled beautifully in behind though. We never thought he was a stayer, but the rest of the family stay and he didn’t fall into a hole.”

“She ran well, the ground was probably just a bit slow for her.”

“We’re happy enough with that, the ground was probably a bit slow for her but she ran well. We’ll see about future plans. The Galway Plate would be a race in our minds for her but we’ll see.”