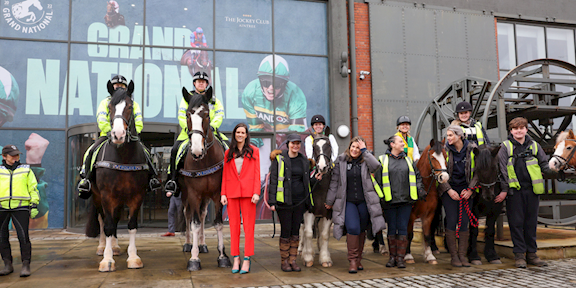 The JRL Group, Jewson, House of Cavani and Poundland are today announced as race sponsors of four of the Grade One contests at the 2022 Randox Grand National Festival (Thursday 7th April to Saturday 9th April inclusive). In addition, Aintree Racecourse will pay tribute to its partnerships with Alder Hey Children’s Hospital and Park Palace Ponies, with races named in their honour.

Leading construction firm the JRL Group is already a partner of The Jockey Club through its sponsorship of the Fulke Walwyn Kim Muir Handicap Chase at the Cheltenham Festival. A three-year agreement now sees the JRL Group extend its support to the Liverpool Hurdle on Randox Grand National Day. The Grade One contest over an extended three miles has an outstanding roll of honour featuring the great Big Buck’s who was successful on a record four occasions (2009, 2010, 2011 and 2012).

House of Cavani, a leading online retailer of Italian-inspired menswear which has Chris Hughes of ITV Racing as its ambassador, jumps into racing for the first time. Its sponsorship will see the Cavani Menswear Sefton Novices’ Hurdle run on Randox Ladies Day. Staged over three miles, last year’s renewal saw a 66-1 upset as Ahoy Senor took the honours for trainer Lucinda Russell and jockey Derek Fox.

Leading retailer Poundland sponsors the Maghull Novices’ Chase on Randox Grand National Day. The two-mile contest has been won by some of the best two-mile chasers ever seen, with the likes of Sprinter Sacre, Douvan and Shishkin all having triumphed in the last decade alone.

Alder Hey Children’s Hospital has an ongoing partnership with Aintree Racecourse stretching back some 20 years and this is commemorated with the 20 Years Together, Alder Hey & Aintree Handicap Hurdle, a Grade Three event which kicks off Randox Ladies Day. Alder Hey is the official charity of the Randox Grand National Festival. This year sees one of its patients, four year old Betty Batt who was born weighing just 650 grams and spent the first 13 months of her life at the hospital, appear in the racecard as the honorary 41st runner in the Randox Grand National.

Park Palace Ponies, an inner-city riding school based in Toxteth, also has an ongoing relationship with the home of the Randox Grand National. In 2021 this partnership led to a pop-up riding school at Aintree, enabling 120 local children a week from families on low incomes to receive riding classes and meals at no cost during the summer holidays. The Park Palace Ponies Handicap Hurdle is the final race on Randox Ladies Day.

“I would like to thank the JRL Group, Jewson, House of Cavani and Poundland for their generous support of four Grade One races this week at the Randox Grand National.

“Alongside the existing partnerships with Randox and Betway, it is fantastic to see such a wide range of brands supporting us over the three days and, as ever, my gratitude extends to all involved in making this happen.

“We are also incredibly proud of Aintree’s strong connections to the local community, and we couldn’t be happier to name races in honour of Alder Hey and Park Palace Ponies to highlight the outstanding work they do.”