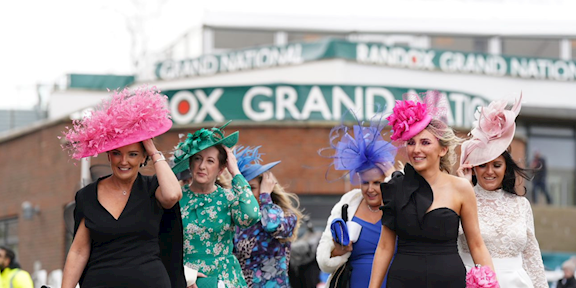 NHS HEROES ENJOY DAY ONE OF THE RANDOX GRAND NATIONAL FESTIVAL AFTER BEING GIVEN 10,000 TICKETS FOR LIVERPOOL’S NHS DAY

NHS Heroes were honoured on the first day of the Randox Grand National Festival, which was renamed 'Liverpool's NHS Day'.

The Jockey Club donated 10,000 tickets to the NHS and social care sector in Merseyside for Thursday's raceday, in recognition of the hard work and commitment of the dedicated NHS and professional carers who are working tirelessly for COVID-19 patients.

Crowds returned to the meeting for the first time since 2019, due to the pandemic, and among them was Irene Axon, 64, Senior Community Fundraising Manager at Alder Hey Children's Charity, who was "giddy" to attend the event with NHS colleagues.

She said: "We've had amazing support from The Jockey Club. I've been at Alder Hey Children's Charity since 1995 and I don't ever remember a time when The Jockey Club didn't support us and then of course the past 20 years the relationship with The Jockey Club has just grown and grown. "So to be here today on this glorious race day with 10,000 of my NHS colleagues, it's magical.

"Nobody has been anywhere for a few years, so to come here we're all giddy with the excitement of the day, and to be at Aintree, this beautiful racecourse.

"I've been very lucky, through The Jockey Club, to come here over recent years. I obviously haven't been to a race day since 2019, so all bets are on.

"All charities suffered through the pandemic, but we've got such a wonderful name in Alder Hey and we've had lots of support and we're doing OK. We've been able to support the hospital with the mental health unit and all the stuff that makes Alder Hey magical."

Aaron Hobson, 54, a Modern Matron of Developmental Paediatrics at Alder Hey Children's Hospital, said it was a "lovely gesture" to receive a ticket for his first-ever horseracing meeting.

He said: "Our workload increased over 100 per cent when the pandemic started and it's not slowed down. We expected a spike post-Covid, but it's not eased off. So it's spiked and it's carried on. It's very difficult. Staff are tired, so, yeah, it's pressured.

"It's lovely coming to Aintree today - totally unexpected. I'm standing in for one of my managers, so it was completely out of the blue, but lovely. I just feel guilty that we couldn't bring everyone else with us, but it's a lovely gesture.

"I've never been to Aintree for horseracing. I've been before because I race motorbikes, but it's the first time I've ever been to a horse race, so it's exciting. It's brilliant."

The Jockey Club announced last year it would donate 10,000 tickets for the first day of the Randox Grand National Festival in April 2021, but with the global pandemic continuing to take effect and with last year’s festival taking place behind closed doors, it was decided to honour the gesture for this year's event instead.