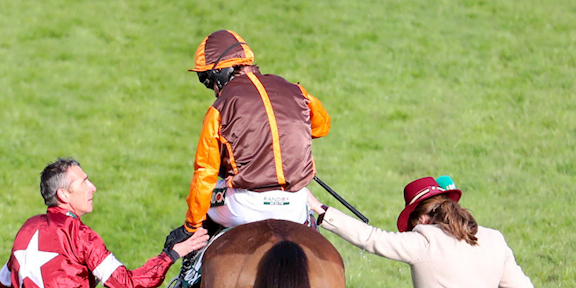 Sam Waley-Cohen, who announced earlier this week that this would be his last ever ride, is the first ever amateur jockey to win the Cheltenham Gold Cup AND the Grand National.

After winning on 50-1 chance Noble Yeats he said: “It’s a dream! It won’t sink in for weeks - it feels like a fantasy, and I just don’t know what to say.

“I’m beyond words. He ran for me. He couldn’t go the early pace, and I was trying to find pockets to give him a bit of space to run into, and I found myself up the inner and I was going more forward than I wanted to.

“He loved seeing his fences, so I kept trying to find a spot where he could see them. If I asked him, he came, but if I just half-asked him, he wasn’t confident, so I was really trying to sit against him.

“He likes the bit in his mouth and your legs on him, so I was just trying to get him in that nice rhythm, and he just ran. As soon as I asked him, he went.

“Jumping the last, I thought, ‘I’ve gone too early!’ I really didn’t want to get there then, but at Cheltenham I was struggling to stay with them all the time, but when I pulled him out and asked him, he gave me way more than I expected, so half when I went for him, I thought he’s got plenty - I know he’s got plenty of toe, so as soon as he picked up, I thought, ‘he’s gone - he’s got this’.

“It’s ridiculous. I have to say thanks to Dad - he’s supported me unwaveringly, lovingly, when others said put someone else on. We’ve had a partnership, we haven’t had one cross word - it’s only been for fun.

“We came here thinking, well, you know, the sun’s out, it’s my last ride, go and have a nice day with no instructions, no expectations, just enjoy. Today Liverpool comes out, Liverpool shows its love, and honestly, you feel like you travel on goodwill at this place.

“You just feel a wave of support and goodwill. These days are big family days, and obviously Thomas isn’t with us, so you always think about him on these days. I still always ride with his initials on my saddle, and these are family days.

“I was travelling too well - I just kept trying to fill him up and take my time, and in a way he got there too early, but when he got there he came alive, so I thought, well, you’d better go now. It’s amazing.

“When I rode Oscar Time I was on fumes all the way, there was nothing, whereas with him he kept finding and kept going. When the other horse came to me, I was, like, come on! And he picked him.

“I always wanted to go out on a high, and I thought Thursday was going to be that high. It doesn’t get better than this, and that’s it now - out!

“You need a lot of luck (over these fences), and you need to be on the right horses, and I think, relatively, I’ve ridden these fences a lot more than some of the other jockeys, and experience does help.

“Honestly, I think it's luck. If you are on the right horse, and things go right for you, or don’t go wrong for you…

“This could literally be a moment that I wake up from. It really couldn’t be better.

“One of my earliest memories is of trying to ride the Grand National on the rocking horse we have at home, just knowing a few of the horses’ names and remembering them.

“I turn 40 next Friday. I’ve always wanted to ride for the love of it, and one of the reasons I wanted to stop now is because I’ve always felt when you don’t want to go every day and you don’t enjoy every race, wherever you come, you should stop, and the days when you don’t want to go travel three hours for a small race, no matter where you come, it’s time to stop - that’s it. Busy family, busy work - enough. That’s it.

“Thinking about doing this again is fool’s gold - I’ve made up my mind, I’ve had the dream ride, and what a way to go out.

“We were looking for a horse - we were going to run Jett, but he wasn’t going to stay the trip. We’d gone up to Wetherby for a hunter chase and we saw Noble Yeats run, and thought, ‘that’s an interesting one, and he’s qualified for the National now - I wonder if they might be interested in doing something’.

“We went and spoke to Emmett, and really liked him - he’s a great trainer - and we thought, ‘why not? Let’s have a crack at it’, and one thing led to another.

“I’ve been so lucky with all the horses I’ve ridden, and in a way, all those rides build up to today; you keep learning, experience, background - if I hadn’t had those days where things haven’t gone right, I wouldn’t have had today.”

In a separate interview just after crossing the line he told ITV Racing: “It's a dream. I can't believe it. I've got to say thank yous, because it's my last ever ride. To Dad, for unwavering belief and love over 23 years - never a cross word, nothing but a dream. It has been a love affair. To my wife, long-suffering! They aren't all good days. There are bad days in this sport. She's always there to support me....

“This is beyond words. It's a fairytale, it's a fantasy, and I’m just full of love, and happiness and gratefulness.”

Waley-Cohen reflected on his success at Aintree over the years, and also paid tribute to his late brother, Thomas.

Summing up his success he said: “Being on the right horses, getting the luck, having the sun out. I do think Thomas is sitting on my back, I ride with his name on my saddle. These days are family days. Honestly, you couldn't make it up could you?”

Asked to sum up his son’s talent, he said: “Dedication, hard work. He only rides about 30 races, apart from point-to-points, in the year, and his record is unspeakably good. I’m really emotional.

“It’s fantastic, that is what we dreamed about for years. Sam used to ride a rocking horse, pretending he was riding Auntie Dot. That’s how far back it goes.”

He added: “It is what dreams are made of. This is it, and you sort of think, ‘last ride ever, 40 years old next Friday, and won so many great races’ - we’ve had such fun.”

Asked to sum up his own feelings about it being his son’s final ever ride, he added: “Joy and sadness that it’s all coming to an end. And the horse is only seven and a novice, so he could be here for a good many years yet, but not with Sam on board.

“I had horses between my retiring and his starting, and I shall have them again.

“It’s an amazing story and Sam has been dreaming of winning this ever since he used to ride Auntie Dot on his rocking horse, trained by John Webber, when he was a little kid. So this really is the fulfilment of a life-long dream.” 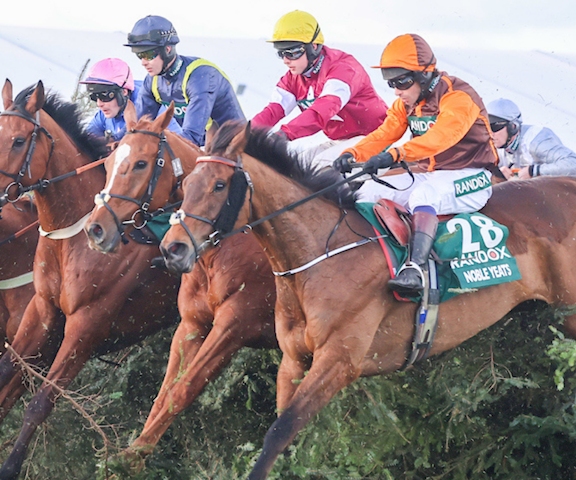