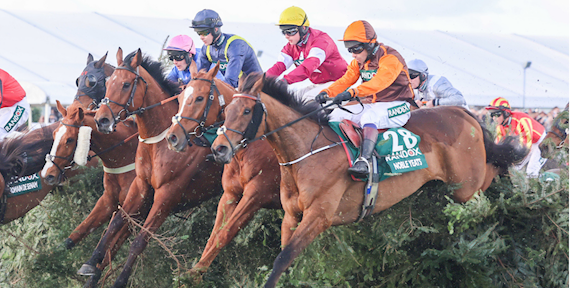 Sam Waley-Cohen is set to call time on his remarkable career as an amateur rider when he pilots Noble Yeats in this afternoon’s Randox Grand National – which will be his 10th ride in the world’s most famous steeplechase.

Waley-Cohen has proven to be a rarity in elite sport as an amateur amongst professionals, winning the 2011 Cheltenham Gold Cup on Long Run and boasting a fabulous record over Aintree’s Grand National course.

The jockey has completed the Grand National course five times from nine attempts in the big race itself, placing on three occasions and he revealed that it was his ride on Jett in last year’s race which persuaded him to hold back on a retirement which he had been considering for some time.

The 39 year old said: “It’s my 23rd year of riding and I’ve always felt like you’ve got to keep learning in whatever you’re doing and you’ve got to keep hungry and it’s as much about enjoying riding out and the days where you’re riding one that’s not going to win as much as it is riding on the big days.

“I started to wonder whether I really wanted to travel for three hours on a Sunday to ride one I didn’t think had much chance – and when those thoughts start to creep into your mind it really triggered it for me, as I’m either all in or all out.

“It just sort of came together to bow out here today really. I probably thought about it last year, but I had so much fun on Jett that I wanted one more go! I’ve been pondering it for the season and I really focus my seasons towards Cheltenham and Aintree – just because I’ve got a few other things going on too.

“I loved Cheltenham and my 20th year of riding at The Festival when my ambition was always to have just one ride there so I felt like I’d experienced everything I wanted to.

“I thought I’d maybe slipped them at one stage on Jett and he just gave me such a good bounce around, it’s his fault that I’m still here this year!

“The Grand National and the fences have been a bit of a love affair for me, I love the people of Liverpool and the atmosphere here and I get such a kick out of riding the fences.

“My boyhood fantasy really was to ride in the Grand National, which was an impossible dream for an amateur. One of my earliest memories is pretending to ride in the National so to actually ride in it and to have to chance to line up and say goodbye to everyone at the course I love is certainly fulfilling that dream.

“This will be my 10th spin in the National and I think I’ve ridden the course about 40 times in all, so I’ve had an amazing time.

“It will be weird seeing those silks (those of his father Robert Waley-Cohen) without me riding, but I’ve always done it with Dad and we’ve been a real partnership. We’ve had so much fun doing it together and we’ll carry on doing it together.

“You can’t get a thrill like being here today and of course I’ll miss that, but all good things come to an end.”

The amateur rider has won on no less than six occasions over the unique Grand National fences – a record which started with back-to-back victories in the Foxhunters’ Chase with Katarino in 2005 and 2006.

Waley-Cohen’s best effort to date in the Grand National itself coming when second on Oscar Time in 2011 and when asked for the secret behind his success, he felt his background in point-to-point riding had helped.

He said: “There’s no secret other than being on the right horse, but clearly it’s one of those courses where if you can get yourself in a rhythm and get your horse travelling and happy, you can have a brilliant time.

“The only other thing I’ve thought besides that is that point to pointing is a brilliant training ground for the National, because people often don’t keep as straight as they do under Rules and there are more horses going in different directions – so it’s a good way to learn about survival!

“The National is such a big event, everyone in the weighing room believes they’ve got a chance and are excited. The crowd and the atmosphere and the buzz is electric and the horses pick up on that, not every horse will handle the situation.

“There’s just so much luck involved, the first five fences are just a case of giving your heart to Lady Luck and hope you get carried along with fair sails. That aspect is very different and it’s not always as tactical as other races and then there’s the length of the race and the challenge of it – every fence is a challenge, and it goes on and on. I’ve always thought that a horse and jockey need to become one out there and I think that sums up the race.

“Katarino was literally a family horse, I was still at school when he was running in the Triumph Hurdle and had never ridden in a point to point. To come here and ride him here (in the 2005 Foxhunters Chase) was a terrifying realisation of a dream and he was such a good horse and gave me such a good day – so it was a great moment for the whole family really.”

Waley-Cohen reached the very top despite his amateur status, culminating with an outstanding victory in the 2011 Cheltenham Gold Cup with Long Run, defeating no less than two jump racing greats in Kauto Star and Denman.

And when asked to reflect on those victories, he said: “It’s amazing. Obviously you’ve got to have the right horses and you’ve got to be very committed but one of the great things is that you’re welcomed and the weighing room welcomes you.

“You’re not just turning up and having a go on the day! There’s a lot of expectation on yourself with things like doing your preparation on the horses and getting yourself fit and I often think turning up at the races with your mind in the right place – that’s the first challenge for a jockey.

“Winning the Gold Cup on Long Run was an overwhelming wave of happiness and relief, for the horse and everyone.

“There was a lot of expectation and there’s a lot of pressure riding in those kind of races, and that makes you more of a sportsperson than a jockey – you have to handle the pressure and handle the good and the bad. To cross the line in front was a moment of real relief and release.

“The way he jumped the last two fences, you could ride the course 1,000 times and not get a horse to hit them on those strides. He was fast and low and all out and it was probably half way up the run-in where I was thinking they’re not coming back to me, which was an incredible second of time and realisation.”

Though when asked to pinpoint his favourite day in the saddle, he leaned towards Aintree. He explained: “I think sometimes the really unexpected days were the best, Katarino and Liberthine in the early days when it was so unexpected and winning was turning up.

“To go on and win those races early on was just beyond belief but every day you have a winner is your next favourite day and if I can win today that would definitely be my favourite day.

“I’ve been very lucky though, I’ve had around 75 winners and four were at the Cheltenham Festival and six were at this Festival. I’ve been lucky enough to win Felthams and King Georges and bet365s so the winners I’ve had relative to the number of winners I’ve had have beaten any hope I could have had. It’s been unbelievable and you can’t really make it up.”

Waley-Cohen will partner the Emmett Mullins-trained Noble Yeats for his final ride in the saddle and when asked to sum up his chances he commented: “People are saying he’s seven which means he’s got no chance but not many seven year olds have run in this and there’s not many data points on it.

“Clearly it would be better if he had more experience, but the race is different to what it was when I started riding and while he’s plenty to do it wouldn’t be a total surprise if he could do it. My first job today is to get him down to the start calm and collected because he can get a bit excited.

“I would love to come back into the winners’ enclosure to say goodbye. Fairytales don’t usually happen though so I would love to just have a great run round with him.”