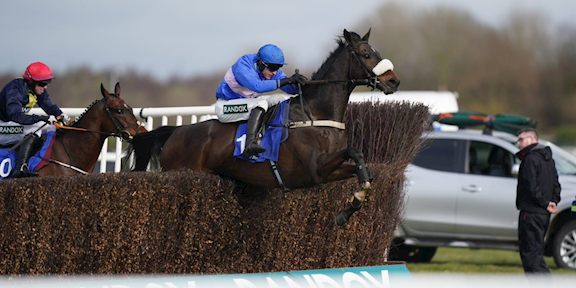 The 12-1 chance came home two and a half lengths to the good over Irish raider Dancing On My Own.

It was a second course and distance success for The Last Day.

Winning trainer Evan Williams said: “Mrs Rucker (owner) must take a great deal of credit for this as he's been plagued with leg problems all his life and she’s done a wonderful job nursing him back. I send him home all broken up and Mrs Rucker sends him back all new and shiny so it’s a massive thank you to her because there’s been a lot of hard work put into that boy to get him here today.

“He’s always been talented and would have won well last time, he just fell and it was one of those things. The weather has been a concern and I got my other raincoat soaking wet walking the course earlier – but I don’t care how wet as I get he needed the rain!

“We could have done without that fall but he’s done lots of schooling and he came right. He’s always been a lovely horse he just hasn’t had his luck until today, so it’s good.

“There’s no doubting he’ll go home now, I wouldn’t even look as far as tomorrow morning. If he ended up with Mr and Mrs Rucker for the rest of his life, it wouldn’t be a big surprise. His old wheels take a fair bit of looking after and things just came right for him today.”

Henry de Bromhead, trainer of second home Dancing On My Own, said: “I’m delighted with him, just gutted we didn’t win. He jumped brilliantly, Darragh was brilliant on him, and it’s great to see him back to his best form. I don’t know whether we will run him again this season - we’ll enjoy today and make plans after that.”

Darragh O'Keeffe, rider of runner-up Dancing On My Own, said: “He ran a great race. He was disappointing on his last race and we were all disappointed but that’s more like it today. He ran a much better race and he did all the donkey work and was still there fighting it out at the finish – so it was a great run.”

Ben Pauling, trainer of third-placed Shakem Up’Arry, said: “He just couldn’t go the early gallop. We jumped off handy, ended up near-last, with a circuit to go and it looked like he would be pulling up and was being bumped along. He’s latched on and flown up the home straight. We all know over two miles he really wants very soft ground.”