No race has had an impact on world horseracing quite like the Derby.

Run at Epsom Downs and in usual circumstances on the first Saturday in June, it is not only the richest race staged in Britain, but is considered the greatest Flat race anywhere on the planet.

So, while races all over the world now take on the name ‘Derby’ in honour of the UK event, it could all have been so different - although somehow the Kentucky Bunbury doesn’t quite have the same ring to it.

Run over 1 mile 4 furlongs, the Derby is for three-year-old colts, while the Investec Oaks is run over the same distance by three-year-old fillies. The two races help make up British racing’s five ‘Classics’, which include the QIPCO 2000 and 1000 Guineas – traditionally run at the beginning of May - and the St Leger, which takes place towards the end of the season.

The Derby has been staged at Epsom Downs every year since, apart from between 1915-1918 and 1940-1945 when World Wars I and II meant the race had to be switched to Newmarket for safety reasons.

The Coronavirus pandemic had threatened to result in a similar venue change for the 2020 renewal. However, following a huge amount of work by The Jockey Club and a proposal to run the race on the Downs behind closed doors, it was agreed by local authorities that the world famous race could remain at its spiritual home.

With racing having been suspended during the height of Covid-19, a rearranged racing programme saw the 2020 Investec Derby and Investec Oaks both take place on July 4th.

Here, we’ve picked out some of the very best races from the Derby archives, putting them in one place for you to watch from start to finish.

Even if you’ve stumbled across this page by accident or as a newcomer to horseracing, it’s an odds-on chance you’ve heard of Shergar.

Of course he’ll go down in history as the Thoroughbred stolen by thieves who demanded a £2million ransom, then disappeared forever. But his achievements on the track were just as remarkable.

Born in March 1978 in Ireland and owned by The Aga Khan, Shergar was sent to Britain to be trained by Sir Michael Stoute. As a two-year-old he ran only twice, winning once and finishing second.

However, it was as a three-year-old that his true ability was discovered, winning five of his six races, including the Derby by a record-breaking 10 lengths.

After winning the Epsom Downs Classic the Aga Khan sold 40 shares in the horse, valuing him at £10 million, and kept six for himself to create an owners’ syndicate with the other 34 members.

Two years later, in 1983, Shergar was stolen from the Aga Khan’s stud farm by an armed gang. Demands for a ransom were not paid and the legend of the turf was never found.

Willie Carson was already a household name when he won the 1989 Derby on Nashwan.

Having won the race twice before, on both occasions for trainer Dick Hern, Carson knew what it took to win the greatest Flat race of them all.

Troy in 1979 and Henbit 12 months later had given him great joy, but the diminutive jockey still has a glint in his eye to this day when you ask him about Nashwan.

After winning both his starts as a two-year-old, the American-bred but British-trained star of the track won an unprecedented four-timer - the 2000 Guineas, the Derby, the Eclipse and the King George VI and Queen Elizabeth Stakes.

In the Derby, Carson and Nashwan had started favourite and were soon into a steady rhythm, perfectly poised to hit the front in the closing stages before easing to a five length win over shock 500-1 outsider Terimon.

Owner Sheikh Hamdan al-Maktoum and trainer Hern decided against trying to win the St Leger and, with it, the Triple Crown, opting instead for a tilt at the Prix de l’Arc de Triomphe in October.

However, after a listless and disappointing prep-run in September, the decision was taken to retire Nashwan immediately.

The result of the 1993 Derby will go down as one of the biggest shocks of the modern era. Not necessarily because Commander in Chief won at odds of 15-2, but because two 150-1 shots finished in second and third and the odds-on favourite, Tenby, was way back in 10th.

Commander in Chief was trainer Sir Henry Cecil’s third of four winners of the Derby and jockey Michael Kinane’s first.

Another who raced for the first time as a three-year-old, he was the first horse to win the Derby having not raced at two since 1973, 20 years earlier.

The youngest of 16 contenders on the day, Commander in Chief stunned his stablemate Tenby and a crowd of 106,000 to win the Derby by nearly four lengths.

He went on to win the Irish Derby but was retired to stand at stud in Japan after finishing third in the King George VI and Queen Elizabeth Stakes at Ascot.

Master trainer Aidan O’Brien has now won the Derby seven times - unequalled in the modern era. High Chaparral was his second success in the race and a second Derby win for jockey Johnny Murtagh.

After winning two of his first three starts as a two-year-old, including the Racing Post Trophy at Doncaster, High Chaparral began his three-year-old season by winning two Derby trials in Ireland.

On Derby day he lined up as second favourite to stablemate Hawk Wing, who had finished second in the 2000 Guineas just weeks earlier.

Murtagh held his ride up in the early stages but moved to take the lead in the home straight. A battle to the line with Hawk Wing ensued, but High Chaparral was never headed and won by two lengths.

After winning the Derby, he went on to win the Irish Derby, an Irish Champion Stakes and twice triumphed in the Breeders’ Cup Turf, once in a dead heat.

For those who prefer their Jump racing to the Flat, you might know High Chaparral for his contribution to racing over obstacles – he’s Altior’s father. He died in 2014.

Trainer Michael Bell – uncle to ITV Racing presenter Oli – won the Derby in 2005 with Motivator, a third and final win in the race for jockey Johnny Murtagh.

As a two-year-old, Motivator fired two warning shots which prompted Bell to describe him as “a very, very serious horse”.

First was a six length win in a maiden race at Newmarket. Then came an impressive victory in the Racing Post Trophy at Doncaster.

Kieren Fallon rode Motivator in 2004 but by the following season had switched to become Ballydoyle’s stable jockey, meaning Murtagh took over in the hot seat.

Trainer Bell opted not to run Motivator in the 2000 Guineas at Newmarket, instead sending him to York to run in the Dante, a race he won comfortably.

As a result Motivator started the Derby as 3-1 favourite, ahead of the Chester Vase winner Gypsy King and Dubawi, who had won the Irish 2000 Guineas so impressively.

Motivator and Murtagh – who had managed to overturn a three day ban to ride in the race – pushed to the front soon after taking Tattenham Corner and, despite Dubawi’s pursuit, won comfortably by six lengths. Murtagh would later describe it as the easiest of his three wins in the race.

Motivator lined up in that year’s Eclipse Stakes at Sandown Park, Irish Champion Stakes at Leopardstown and the Prix de l’Arc de Triomphe in Paris, but on each occasion faded after taking the lead and failed to win any of the Group One races.

He was due to fly to America to run in the Breeders’ Cup Turf at Belmont Park but after ‘coughing’ at home was withdrawn from the race and immediately retired.

Motivator’s success did not end there, however. At stud he sired the dual-Prix de l’Arc de Triomphe winner Treve.

Regarded by many as one of the greatest racehorses of all time, Sea The Stars became the first to win the historic treble of the 2000 Guineas, the Derby and the Coral-Eclipse since Nashwan in 1989.

Trained by John Oxx in Ireland, he won two of his three races as a two-year-old before completing a perfect campaign as a three-year-old to win six Group 1 races.

Having been rested over the winter, Sea The Stars was entered in the Guineas without a prep run to his name.

After winning the Newmarket showpiece he went on to win the Investec Derby a length and three quarters and leaving a trail of FIVE Aidan O’Brien-trained horses in the next six places.

After Guineas and Derby success he then won the Prix de l’Arc de Triomphe. Sea The Stars remains the only horse to have won all three in the same year.

One of the most iconic images from Derby days of the 21st Century must surely be teenage jockey Mickael Barzalona standing up rod-straight in his irons celebrating victory.

Of course, countless other jockeys have done the same in big races, but few when the margin of victory has been so narrow that it requires a photo to separate them from placed horses.

The Irish-bred but French-trained Pour Moi was something of an unknown quantity to British racing fans when he lined up at Epsom Downs on June 4th 2011, having only run four times previously, all of them back in France.

However, bookmakers made him the second favourite behind Her Majesty The Queen’s horse, Carlton House, who had only recently won the Dante.

In the race itself Pour Moi remained held up towards the rear and was still several lengths off the lead with a furlong to go. However, 19-year-old Barzalona pushed him forward to show a superb turn of foot, recording France’s first Derby victory since 1973.

Frankie Dettori’s first Derby success was Authorized in 2007, but ask the Italian which he enjoyed best and he’ll tell you with a sparkle in his eye that it was Golden Horn in 2015.

It was also a second win in the race for trainer John Gosden, whose own glittering career includes more than 3,000 winners and countless Group One successes.

Few horses achieve in one season what Gold Horn did in 2015. Having won his only race as a two-year-old, the colt showed fine form to win the Feilden Stakes at Newmarket in mid-April before then taking the Dante at York.

These victories ensured he lined up as favourite in the Epsom Downs showpiece and it was soon justified.

Dettori held his mount up towards the back of the field but switched him wide in the home straight and the pair stormed to victory to maintain their then-unbeaten record.

Golden Horn went on to win the Coral-Eclipse at Sandown Park the following month before winning the Irish Champion Stakes and then the Prix de l’Arc de Triomphe in October.

This succession of high profile victories made him an easy choice as Cartier Horse of the Year.

Golden Horn was retired to stand at Dalham Hall Stud in 2016 in a partnership between his owner, Anthony Oppenheimer, and Sheikh Mohammed’s Darley Stud. 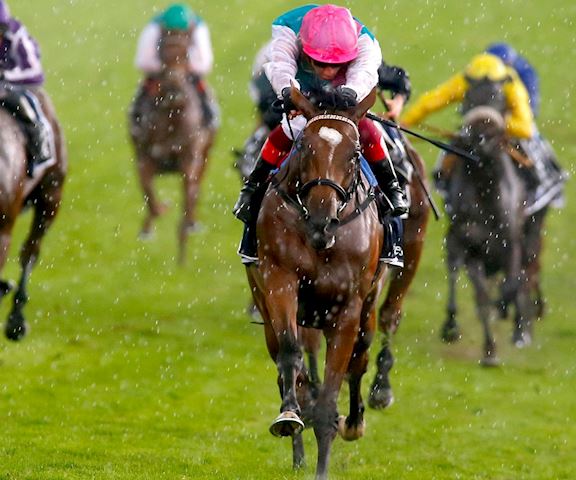 We have gone through the archives to bring some of the best of The Oaks at Epsom Downs, sit back and enjoy.