The History of Epsom Downs Racecourse

The strange origin of Epsom’s rise to fame came in 1618, when herdsman, Henry Wicker discovered a water hole northwest of the turnpike road, between Epsom and Ashtead. Although the water, thought to be undrinkable, was examined by local physicians, it was a further 12 years before the highly purgative qualities of the water were discovered - one gallon of water containing 480 grains of calcareous nitre.

What followed was a product that became known as Epsom Salts, which at its height, sold at five shillings an ounce in 1640. Samuel Pepys wrote in his diary of 1667, “We got to Epsom by 8 a-clock to the Well, where much company; and there we light and I drank the water.”

Later he visited the King’s Head, the nearest inn to the downs, “where my Lord Buckhurst and Nelly (Nell Gwynne, the King’s mistress), is lodged at the next house, and keeps a merry house.”

In mid-May 1648, during the throes of the Civil War, the Earl of Clarendon in his History of the Rebellion relates, “a meeting of the royalists was held on Banstead Downs, under the pretence of a horse race, and six hundred horses were collected and marched to Reigate.” This suggests that for such an under-cover rendezvous to take place, racing at Epsom must have been a regular and well attended occasion.

Under the Commonwealth (1649-60), horseracing was banned, but upon its demise, the first recorded race meeting in the country took place at Epsom on 7 March 1661, in the presence of Charles II.

Throughout the fluctuating fortunes in the town, race meetings on the downs had become a regular feature in May and October from 1730, with prizes of cups and plates provided by the local nobility. 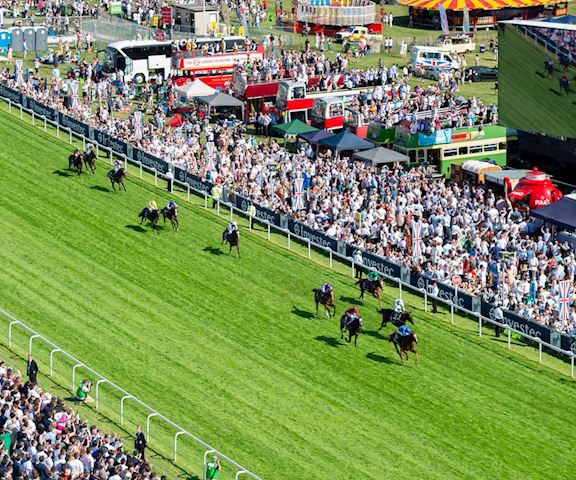 the Story of the Derby

How it all began... and what it is today

Her Majesty The Queen and The Derby

We have had the privilege of welcoming Her Majesty The Queen to The Derby for nearly 70 years.