First run in 1779, the Oaks at Epsom Downs is the second oldest of the five Classic races and for three-year-old fillies only.

The 12th Earl of Derby and some friends came up with the idea of running the race for fillies during a party at his estate, which was called The Oaks, on the outskirts of Epsom. The race was first run as The Oakes Stakes the following year, 12 months before the introduction of The Derby.

The Oaks subsequently became one of the most important races for three-year-old fillies anywhere in the world and has prompted other countries to devise their own equivalents, including the Irish Oaks, the Prix de Diane and the Oaks d’Italia.

Run over 1 mile 4 furlongs - like the Derby - the Oaks has been staged at Epsom Downs every year since its inaugural race, apart from between 1915-1918 and 1940-1945 when World Wars I and II meant the race had to be switched to Newmarket for safety reasons.

The Coronavirus pandemic had threatened to result in a similar venue change for the 2020 renewal. However, following a huge amount of work by The Jockey Club and a proposal to run the Investec Derby and the Investec Oaks on the Downs behind closed doors, it was agreed by local authorities that the world famous races could remain at its spiritual home in 2020.

With racing having been suspended during the height of Covid-19, a rearranged racing programme saw the 2020 Investec Derby and Investec Oaks both take place on July 4th.

Here, we’ve picked out some of the very best races from the Oaks archives, putting them in one place for you to watch from start to finish.

The Most Famous Epsom Oaks Races

These Epsom Oaks races will go down in history as the most unexpected, exciting and action-packed.

An Irish-bred, British-trained star of the track, Oh So Sharp won the 1985 Oaks on the way to the fillies’ Triple Crown.

Owned by Sheikh Mohammed and trained by Sir Henry Cecil, she had demonstrated huge promise by winning the Solario Stakes and Fillies’ Mile at two years old.

As a three-year-old she started the season by winning the Nell Gwyn Stakes at Newmarket, before adding the 1000 Guineas in a record time at the same track just weeks later.

At Epsom Downs the following month Oh So Sharp won by a hugely convincing six lengths from Triptych, giving American jockey Steve Cauthen his first ever win in the race. Cauthen and Cecil would also team up to win that year’s Derby with Slip Anchor.

For Oh So Sharp, victory in the St Leger later the same season guaranteed not only the coveted Fillies Triple Crown but also saw her crowned as the top-rated European Three-Year-Old Filly of the year.

Her racing debut came on April 24th 1992 in a maiden race at Sandown Park. After winning that and then the Oaks trial at Lingfield a few weeks later she was pitched straight in to the Oaks on June 6th.

A 5-1 shot, she quickened from Tattenham Corner to take the lead three furlongs from home and couldn’t be caught, holding off Sir Henry Cecil’s favourite All At Sea in second and Lester Piggott’s 33-1 chance Pearl Angel back in third.

User Friendly went on to win the Irish Oaks, the Yorkshire Oaks and then the final Classic of the season, the St Leger, before finishing second in the Prix de l’Arc de Triomphe.

She raced for two more seasons before being bought for £2.5 million by a Japanese breeder, who based her in Kentucky as a broodmare. Later she was sold again, this time to stand at Barronstown Stud in Ireland.

Ramruma was another Sir Henry Cecil-trained filly who dominated races in her season as a three-year-old.

Unconvincing as a two-year-old, Ramruma impressed at the start of the following year, beating colts to win a maiden race at the Craven meeting in Newmarket.

Another victory in the Oaks trial at Lingfield saw bookmakers cut her odds to 3-1 for the Oaks proper at Epsom Downs and she started second favourite on the day.

Jockey Kieran Fallon settled her behind the leaders for much of the race before making his move two furlongs from home and accelerating clear to win comfortably by three lengths.

Ramruma went on to win the Irish Oaks and Yorkshire Oaks but finished second in the St Leger, despite starting odds-on favourite.

She raced on as a four-year-old but never won again and was retired at the end of the 2000 season.

Few horses have made an impact by winning races all around the world quite like Ouija Board.

Not only did the Ed Dunlop-trained superstar win the highest accolade for three-year-old fillies in Britain, the Oaks, in 2004, but she was also went on to win the Irish Oaks, the Breeders’ Cup Fillies and Mares Turf and the Hong Kong Vase, among other Group One races.

Ouija Board competed over four seasons with seven different jockeys, including wins with Olivier Peslier, Kieren Fallon, Frankie Dettori and Jamie Spencer on board.

She started the 2004 Oaks as 7-2 second favourite, but won by a huge seven lengths to defeat the Aidan O’Brien-trained favourite All Too Beautiful and two strongly fancied Godolphin horses in Punctillious and Sundrop.

The win gave jockey Fallon a rare Oaks-Derby double for the year.

Ouija Board retired due to injury just 24 hours before what was due to be her final ever run, in the Hong Kong Vase. Had she finished in the first two in the race she would have become the highest-earning British racehorse in history.

Sir Henry Cecil’s filly made an inauspicious start to her racing career, finishing second in a six furlong maiden race at Newmarket as a two-year-old, before a third place in a seven furlong maiden at the same course four weeks later.

Despite winning her third start, in yet another Newmarket maiden, Light Shift ended the season being rated just 83 by the Racing Post, a huge 30lbs lighter than horses considered among the very best.

However, it was as a three-year-old that Light Shift blossomed beyond all recognition.

First by winning a 10 furlong race at Newbury for colts and fillies, then by winning comfortably in a Listed race at Chester.

In the Oaks at Epsom Downs, Light Shift started at 13-2 in a field of 14, but showed her class and resilience to move into the lead two furlongs from home and going on to hold off the strong challenge of Aidan O’Brien’s Peeping Fawn to win by half a length.

While it was Sir Henry’s eighth win in the race, it was his first Classic victory for seven years.

Ryan Moore is now one of Britain’s most successful Flat jockeys, but 10 years ago he was still waiting for his first Classic success.

The year 2010 was to prove his breakthrough, winning not only the Oaks at Epsom Downs but also the Derby and, four months later, the Prix de l’Arc de Triomphe.

Snow Fairy, trained by Ed Dunlop, was Moore’s first taste of Classic glory, despite having done little as a two-year-old to suggest she would win at the highest level.

In fact, Snow Fairy was in the winner’s enclosure only once from six attempts in her first season, meaning victory in a Listed race at the start of the following season was something of a surprise.

A 12-1 shot in the Oaks, Snow Fairy and Moore made their move from towards the back of the field, thundering home to win despite bouncing off the rails in the closing stages.

Once again ridden by Moore she went on to win the Irish Oaks with ease, before going on to record victories in Japan, Hong Kong and France later in her career.

She was retired in 2013 following an injury and was sent to stud in Ireland.

Trainer Aidan O’Brien and jockey Ryan Moore have teamed up to win countless Group One races as a partnership. However, 2016 remains the only Investec Oaks won by the pair.

Minding had been among the leading two-year-old fillies of her generation in Europe when winning three of her five starts, including the Group One Fillies’ Mile at Newmarket.

As a three-year-old she convincingly won the QIPCO 1000 Guineas at the same Rowley Mile track, only to be beaten when favourite in the Irish equivalent.

However, back on English soil Minding dominated the Investec Oaks to secure victory for Moore and O’Brien to become the first horse since Kazzia in 2002 to win the Guineas-Oaks double.

After winning two more Group One races she then defeated the colts in the Queen Elizabeth II Stakes at Ascot on British Champions Day and was later named the Cartier Horse of the Year and the world’s best three-year-old filly.

Having returned to the track for another season as a four-year-old she won her first race back, but sustained an injury and never raced again.

Few Flat horses since the great Frankel have captured the public’s imagination quite like Enable.

Having made only one appearance as a two-year-old (and winning) on a synthetic track at Newcastle no-one really knew what to expect when she returned the following season.

There was nothing to suggest the heights which would follow when she finished third in a low key race over 10 furlongs at Newbury in late April.

And it was only when Frankie Dettori partnered her for the first time at Chester that people started to sit up and take notice, the pair winning the Cheshire Oaks comfortably.

Those who remember the 2017 Investec Oaks might do so primarily because of the huge thunderstorm and torrential rain which engulfed the Downs moments before and during the race.

However, Dettori and Enable took it all in their stride to win by an impressive five lengths from odds-on favourite Rhododendron. That day Dettori said he believed his filly would “get better and better” – he wasn’t wrong.

Since winning the Oaks, Enable and Dettori have teamed up to win a string of high profile races including the Irish Oaks, the King George and Elizabeth II Stakes twice, the Coral-Eclipse and the Breeders’ Cup Turf.

She also won the Prix de l’Arc de Triomphe in 2017 and 2018, agonisingly missing out on a record-breaking third successive win in the Paris race in 2019 when pipped in the final strides by Waldgeist.

Despite Enable now being six years old, owner Khalid Bin Abdullah has resisted the temptation to send her to stud and Gosden is training her to compete in 2020. 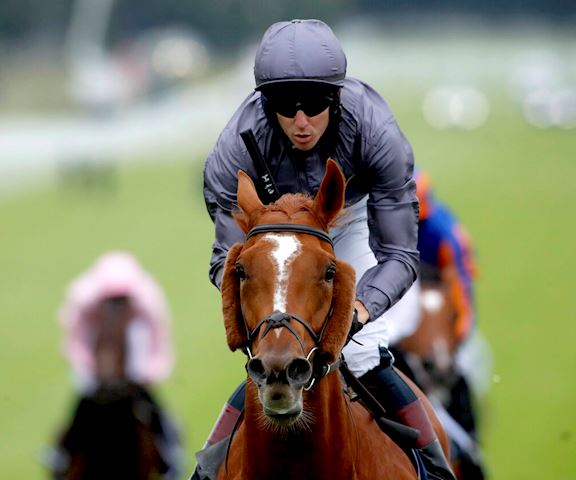 Here, we’ve picked out some of the very best races from the Derby archives, putting them in one place for you to watch from start to finish.