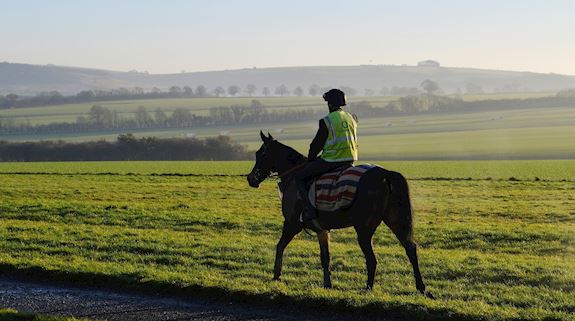 Eleven entries have been confirmed for the 32Red King George VI Steeple Chase at Kempton Park on Wednesday 26th December.

Last year’s winner, Might Bite heads the field as the current favourite with the sponsors despite a disappointing return at Haydock last month where he finished at the back of the field. Trained by Champion trainer Nicky Henderson, he will be hoping Might Bite can repeat last year’s Kempton triumph and put the Haydock run behind him.

Following Bristol De Mai’s four-length success in the Betfair Chase, trainer Nigel Twiston-Davies will attempt to win the Grade One contest for the first time as connections set their sights on the £1 million Jockey Club Triple Crown bonus. Bristol De Mai’s best form has been at Haydock and he will need to prove that he can win a race of this nature at Kempton.

Paul Nicholls, the most successful trainer in the race boasting nine wins, will have his 32Red King George VI team headed by recent Grade two winner, Politologue. He will be tackling the three-mile distance for the first time at Kempton Park on Boxing Day. Nicholls’ other 32Red King George VI challenger is the six-year-old Clan Des Obeaux.

Gold Cup winning Native River makes up one of two runners for trainer Colin Tizzard. Native River finished a creditable second behind winner Bristol De Mai at Haydock and will hope to reverse the form on Boxing Day. Tizzard’s other runner Thistlecrack, the 2016 32Red King George VI winner, will return to Kempton after a promising seasonal reappearance at Haydock where he finished third, just five and three-quarter lengths behind winner Bristol De Mai and stablemate Native River.

The Ruth Jefferson trained Waiting Patiently, currently second favourite, will be making his seasonal reappearance and hoping to continue his unbeaten record over fences. He was last seen at Ascot 10 months ago but recently had an away day to Hexham racecourse in preparation for the race. Ruth took up her training licence after her father sadly passed away at the beginning of the year.

The sole Irish entry for this year’s race comes in the shape of the Gordon Elliot trained Shattered Love. The seven-year-old mare won the JLT Novices’ Chase at the Cheltenham Festival in March and was last seen finishing 2nd to Min at Punchestown on 9th December.

Double Shuffle, trained by Tom George, is hoping to go one better in this year’s race having finished a gallant second in the race last year despite being one of the outsiders.

Trainer Jane Williams and jockey Lizzie Kelly will be hoping Tea For Two can go a few better in this year’s renewal having finished third last season.

“It’s great to see such a strong line-up for the 32Red King George VI Steeple Chase.

“It’s going to be a brilliant two days of racing over the 32Red Winter Festival along with all of the other entertainment on offer for people of all ages.”