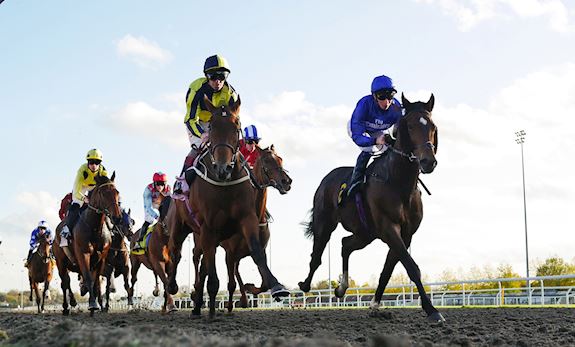 The new training partnership of John and Thady Gosden began with a winner at Lingfield Park on 26th March and the father and son combination enjoyed a first Listed success when Global Giant scored in the feature Ladbrokes Magnolia Stakes at Kempton Park on Saturday 27th March.

British racing very sadly lost one of its greatest ever supporters earlier in the week with the death of Sheikh Hamdan Al Maktoum. His famous blue and white silks poignantly were first and second in the Ladbrokes Roseberry Handicap, with Al Zaraqaan coming home three lengths to the good over Almighwar.

Elsewhere on the card, Great Ambassador made an impressive debut for Ed Walker, leaving the trainer to ponder the Wokingham Handicap at Royal Ascot. The tough as teak Nortonthorpe Boy took the lead in the race to be crowned winning-most horse of the All-Weather Championships (which concludes on Good Friday, 2nd April) as he chalked up his sixth success of the campaign. We sent Graham Clark to review the action and speak to the winners on the day …

Global Giant will be aimed at Group race targets once again after getting his career back on track in emphatic fashion when completing a quick-fire 5.9-1 double for John and Thady Gosden in the Ladbrokes Magnolia Stakes at Kempton Park today.

After failing to make an impact on the dirt in the Saudi Cup in Riyadh last time out, the six-year-old son of Shamardal proved a cut above his rivals on first start in Britain this year when claiming the feature mile and a quarter Listed prize.

Tracking the early pace set by Faylaq the 8-15 favourite quickly asserted once sent on just outside the furlong pole before passing the post six lengths clear of Stormy Antarctic, which also completed a double for winning rider Rab Havlin.

John Gosden said: “He needed a confidence booster. He got the worst of the dirt down on the inside in the Saudi Cup and it is hard for them to face it when they are not used to it whereas Mishriff was lucky as he had an outside draw in the race.

“He was unfortunate in the Bahrain International Trophy where he got badly left in the gate and was flying at the finish. He was in front after the line but not on the line.

“He is a lovely horse that belongs to Sheikh Isa and I will talk to him but we might have a look at the Earl Of Sefton at Newmarket next month. It would be nice to get a Group race win into him.

“He took the travelling to and from the Saudi Cup fine. From a wide draw, he would have got a piece of it. With a lot of horses like him now if there is attractive prize money abroad, they will go for it as it is logical.”

Otyrar got the ball rolling for the Gosden and Havlin when making his third racecourse appearance a winning by a length and a half in the opening Watch Racing Free Online At Ladbrokes EBF Novice Stakes.

John Gosden said of the 7-2 winner: “Apart from the shenanigans going into the first bend it was a straightforward race. We are happy with him and he has learnt from his last run.

“The mile and a quarter here on the inner track you have to be in a reasonably good position if they slow the pace up which they often do down the back.

“We are very happy with him and he is learning the game. I think we will stay at a mile and a quarter but he will probably get a mile and a half in the end.” 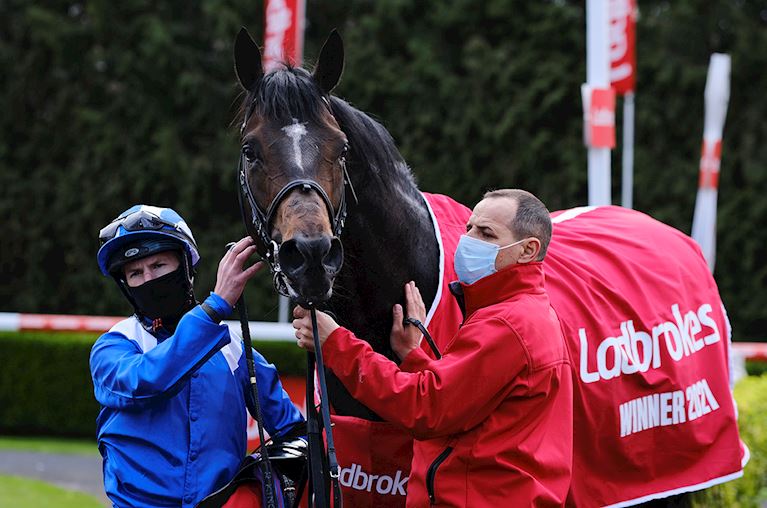 Al Zaraqaan secured a poignant success when completing a four-timer in the manner of horse with plenty of big days still ahead of him in the Ladbrokes Roseberry Handicap at Kempton Park today.

The William Haggas-trained four year old was the first horse to score in the famous blue and white silks of his former owner Sheikh Hamdan Al Maktoum (now registered as Shadwell Estates Company), who died aged 75 on Wednesday, when carrying top weight to glory on his return to action.

Having travelled strongly throughout the 1m3f contest the son of Golden Horn, despite hanging to the right during the closing stages, demonstrated a willing attitude to get the better of a late battle with Almighwar, who was also carrying the famous Sheikh Hamdan colours, before scoring by three lengths.

Maureen Haggas, wife and assistant trainer, said: “It’s a poignant success as Sheikh Hamdan was a star. It’s tragic as he was such a nice man that really loved his horses. He supported his trainers morally not just financially. He always wanted to know what the trainers thought and you could always talk to him. If he had one opinion and you had another you could have a discussion with him about it. He was a very nice man that will be greatly missed.

On the Evens winning favourite she added: “He is a nice horse but mentally he is still a bit babyish and he was shouting away before the race. Since being beaten first time out, he has not done much wrong and hopefully, he can turn into a real nice horse.

“He was hanging a little bit late on when he wasn’t really focussing but he was really excited to be back out again. He didn’t run that long ago but we did let him down a bit so he will definitely improve for the race.

“This suited him much better than Lingfield as he is a big horse. Hopefully, he will be better still when he goes back on grass while I imagine he would get a little further.” 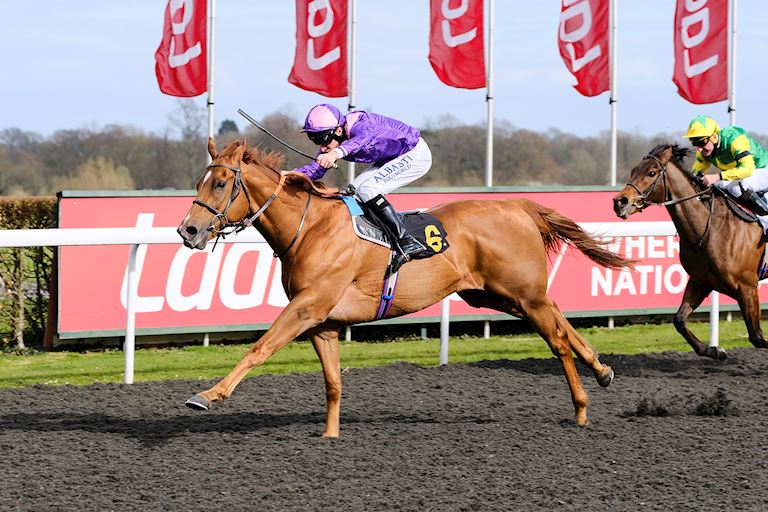 Ed Walker hopes he has a Royal Ascot horse on his hands in Great Ambassador who made his stable debut a winning one in the Ladbrokes Where The Nation Plays Handicap.

Without a victory to his name since landing a novice contest at Chelmsford in 2019, the gelded son of Exceed And Excel set the record straight when making his first start over six furlongs since finishing second over course and distance on his debut a winning one.

Bursting through at the furlong pole the 9-4 shot kept on strongly all the way to the line to defeat Barbill by two and a quarter lengths to initiate a double for jockey Luke Morris.

Walker said: “He had been showing a lot of speed at home so we decided to drop him back to six furlongs and he has done that.

“I was a bit surprised by his edginess here beforehand and at the gates, as he is an absolute bus at home and I could put my three-year-old daughter on him!

“The way he travelled through it I was a little bit nervous he would not have enough speed to pass May Sonic but he has done it well. He looks an exciting addition to the team.

“He is going to be a proper fast ground horse and I would love to try and sneak him into the Wokingham.”

The Lambourn handler was also delighted with the effort of stable stalwart Stormy Antarctic, who finished second on his return in the Ladbrokes Magnolia Stakes.

He added: “It was a great run. John’s horse (Global Giant) had the better track position in a slowly run race. We just wanted him to have a confidence building exercise having lost his way a bit at the end of last season. It looked there though that all his ability and enthusiasm was still there. I know he is a bit long in the tooth but he loves his racing.”

Robbie Downey celebrated his first winner since joining forces with Classic-winning handler Ralph Beckett when steering Biggles to glory by half a length in the Ladbrokes Committed To Safer Gambling Novice Stakes over six furlongs.

The 24-year-old said: “I tried to keep it simple with him and he hit the front and just looked around a bit and one came at him with a wet sail and that just nudged him forward a little bit.

“The drop back to six furlongs was no issue as he jumped and travelled well. Hopefully, he is a horse that will improve on that.

“I started working for Mr Beckett in January and I’m there for the season so please to God it’s a good one but it’s nice to get a winner on the board for him.”

Nortonthorpe Boy showed no signs of a busy winter catching up with him after securing a fifth success since the turn of the year after completing a double for Group One-winning rider Morris when prevailing by half a length in the Play Ladbrokes 5-A-Side Handicap.

Morris said of the Phil McEntee-trained 14-1 winner: “He is an exceptional little horse though I thought he would be a bit vulnerable to one of the more lightly raced three-year-olds in the race but he just keeps improving. It was not the plan to sit where I was but I just got squeezed out the stalls. That puts him back top of the winning most horse leaderboard in the All-Weather Championships now and I think Phil will be praying that the others close to him don’t go in this week.”