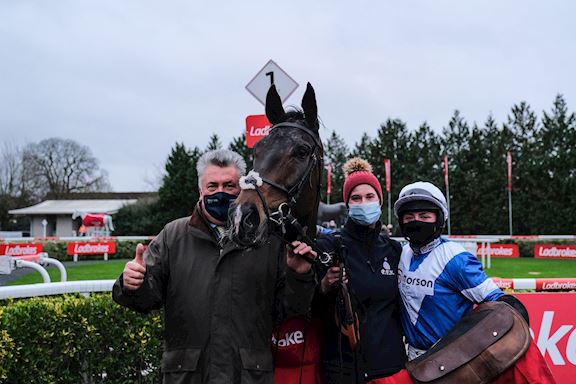 Paul Nicholls, the most successful trainer in Ladbrokes King George VI Chase history with 12 wins to his name, has already set his sights on adding a 13th, with previous winners Frodon and Clan Des Obeaux being readied for the Boxing Day showpiece.

Reflecting on the 2020-21 campaign, Nicholls said: "It was a great season to get 176 winners in considering we lost two months.

“We won the King George again, and though we didn’t have a Cheltenham Festival winner, we had some great times.
“A 12th King George was fantastic and Politologue winning a second Tingle Creek was great but I suppose the real big one was the pleasure we got going over to Ireland and winning at Punchestown with Clan Des Obeaux.”

Prior to Clan Des Obeaux landing the Punchestown Gold Cup the nine year old had got his season back on track when bolting up by 26 lengths in the Betway Bowl at the Randox Grand National Festival at Aintree.

Although things failed to go right for Clan Des Obeaux in last year’s Ladbrokes King George VI Chase on Boxing Day, Nicholls believes he can add to his 2018 and 2019 successes in the race and once again be crowned the king of Kempton Park.

He said: “Clan had a good time last season and the cheekpieces just woke him up a fraction.

“He probably should have won at Newbury. He was a bit idle that day but it was prep race for Aintree as he didn’t have the best run in the King George before that.

“This year his first run will be at Kempton in the King George and we are not going to run him before then because I think he is good fresh and that Haydock race (Betfair Chase) takes a bit out of him.

“The idea is to go Kempton, Newbury, Aintree and Punchestown. We will probably go to Wincanton for a gallop beforehand.

“We will try and win a third King George with him and it would be great if he can do that. If Clan runs like he did at Aintree and Punchestown, he would take all the beating.”

Standing in Clan Des Obeaux’s way will be stablemate Frodon who will defend his Ladbrokes King George VI Chase crown after taking in a trip to Down Royal to contest the Grade One Ladbrokes Champion Chase.

He said: “Frodon will go back and try and defend his title but he will go to Down Royal first for the good race there then go to Kempton then make a plan after Christmas which route we go with him.

“He had the run of the race in the King George but he keeps surprising people all the time. However, that is the nature of the horse.

“I might go to Leopardstown with him after Christmas but we will keep all options open. We might enter him in the Gold Cup. I know Mr Vogt (Paul Vogt, owner) would like to run him in that but I’m not totally convinced that is his race.

“There are plenty of good races for him. Ultimately, he loves Sandown on the last day of the season and the Oaksey Chase."