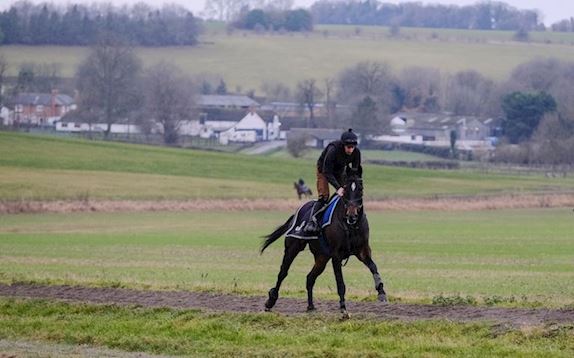 Nicky Henderson believes that Chantry House will have to take a step up on what he showed as a novice and be “very sharp” if he is to win what looks a red hot renewal of the Grade One Ladbrokes King George VI Chase at Kempton Park on Boxing Day.

The Seven Barrows trainer has won the prestigious three-mile contest three times in his career with Long Run (2010, 2012) and Might Bite (2017). And, describing it as “the second most important classic chase of the season”, Henderson has confirmed he hopes to run both Chantry House and Mister Fisher in his bid to win it for a third time.

Explaining the significance of the Ladbrokes King George VI Chase – the second leg of The Jockey Club Chase Triple Crown, which includes the Betfair Chase and the Cheltenham Gold Cup – he said: “We’ve had some very good days in the King George, we’ve won it and had some unlucky ones a few times and to me it’s the second most important classic chase of the season

“It’s the classic for the first half of the season, so not surprisingly it’s a race that everybody wants to win. It’s a race with a terrific history, I can remember the days of Arkle which makes me pretty ancient!”

Seven year old Chantry House enjoyed a glittering first campaign over the larger obstacles last term, winning at both the Cheltenham Festival and the following month’s Randox Grand National Festival, and will arrive at Kempton Park on the back of a commanding victory on reappearance at Sandown Park last month.

However, that most recent success saw Chantry House defeat just one rival and Henderson is under no illusions that his charge will need to find another gear in a race which is set to include last season’s Cheltenham Gold Cup winner Minella Indo, two-time King George winner Clan Des Obeaux and Frodon who was triumphant in the race 12 months ago.

Henderson said: “He’s been very good since his run at Sandown. It was a two horse race though, which proved nothing to anybody who was looking for a fault or anything. He went round in a very respectable time considering he was doing it on his own, so you couldn’t be happier with him, while he had a spin on a racecourse which really woke him up last week.

“You’re going to have to be very sharp here. Three miles around Kempton is different and my plus for him is that until Aintree last season he was doing all of his racing and winning over two and a half miles, including round Kempton, so he’s not a slow three mile horse.

“We upped him to three miles at Aintree and he got it well and although it was a ‘solo’ around Sandown last month he was very good. We haven’t taught him to be a three miler but he has got natural pace – if you can go two and a half miles you’ve got some – and with that it helps you around Kempton because they’ll go quick. If they’re going quicker than Frodon they’ll be going too quick, but the good thing about Chantry is that pace isn’t going to frighten him.

“He’s only just out of novice company, so I would say that he will need to step up on last year. We’re taking on Gold Cup winners and previous King George winners and we don’t know anything about those coming out of novice company. He didn’t beat anything at Sandown but I’m not complaining about that, we’ve often used the Ladbrokes Trophy for our second season chasers but we rather felt that it wasn’t the place for him.

“If you’re thinking you have a King George horse you’d be hoping to progress to a Gold Cup. He’s a very laid back horse, which I think is in his favour, and I’m not worried that he isn’t quick enough.”

When asked about his views on the opposition this Sunday, Henderson admitted you can make cases for most of Chantry House’s rivals.

He explained: “I’ve got respect for everyone in the field, but I still think that the Gold Cup is undoubtedly the best guide. You’d always say the best guide to the Derby is the Guineas and if you’re coming into this I think last year’s Gold Cup winner is the horse we’ve all got to watch. Frodon as we all know is a tough old devil - he’s very hard to beat and you could have a lot of solutions so it’s a great race on paper.

“Willie (Mullins) is going to come over with a couple and Asterion Forlonge is pretty smart too – I know he tipped up the other day but he ran a pretty good race. He belongs to Joe Donnelly who owns Shishkin, so I know the horse quite well. He is a good horse though and I think he could be a challenger.”

Henderson could well be double-handed in the Grade One contest and will send out Mister Fisher, who got within a neck of Frodon when last seen on a racecourse at Sandown Park in April, if he impresses on the gallops today (Tuesday 21st December).

His trainer explained: “We’ve had some issues with Mister Fisher and his work was uncharacteristically lacklustre. I called in the vets two months ago and he had a fibrillating heart, which is not a nice problem to have. We got this corrected reasonably quickly after about three days, but it put us on the back foot and you’ve got to make up for that. The Mister Fisher we know is back now though, it’s incredible and you wouldn’t believe it was possible.

“I would have liked to have gone from the Peterborough Chase to the King George with him. To me the Peterborough was always a race that’s made for him and although we couldn’t get there he’s a horse that has flown back into the picture.

“It’s a pretty unorthodox preparation, I have to say. He’s very good though and he looked as though he had Frodon beaten at Sandown on the last day of last season, so there’s not a lot of difference between the two. I’ve always wanted to try him over three miles but he needs to come through a gallop on Tuesday morning if he is to run. I know James and Jean Potter are keen to run and if he works really well he will run - and James Bowen will be on him.”