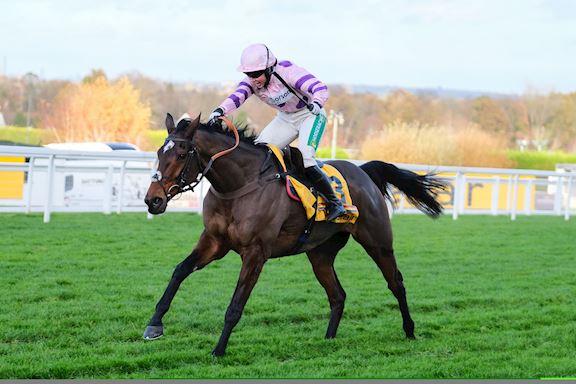 The action at Kempton Park on Monday 27th December, day two of the Ladbrokes Christmas Festival, is headlined by the Grade Two Ladbrokes Desert Orchid Chase, in which Greaneteen is set to take his chance for the Paul Nicholls team.

The seven year old has really come of age so far this year, winning the Grade One Betfair Tingle Creek Chase in fine style at Sandown Park earlier this month and his trainer is hopeful that there could be more to come from him yet.

He said: “He’s come incredibly well out of Sandown to be honest and he astonishes me how he keeps improving physically. He hardly lost a kilo that day and is obviously at the top of his game, he powered on strongly and won that race well so he’s in good shape. He’s definitely going to run and we’re looking forward to seeing whether Shishkin turns up or not.

“He loves going right-handed and it suits him well, but I just think he’s a very versatile horse who’s improving. He schooled really well yesterday with the other lads and he’s in good shape.

“Two years ago he won a novice handicap chase off a rating of 132 and look where he is now. He’s just got better and better and those type of horses tend to keep improving, of course his win in the Tingle Creek was by far and away his best performance but he was improving all the time last year and it’s just a matter of getting the best out of him.”

The race could see a mouth-watering match up with the unbeaten chaser Shishkin and when asked about his views on the seven year old, Nicholls said: “He’s definitely an improving horse and who knows there could be more to come – you’d have thought the other day that you’d know he’d had a race after the Tingle Creek but he’s bounced back really well and we can’t wait to run him on Monday.

“Shishkin had a great season last year and was well-placed, he won some nice races earlier on in the season where he was going to be hard to beat and obviously won at Cheltenham and Aintree but he’s a novice and he has to step up now.

“Ratings-wise, both he and Greaneteen are the same on what they’ve achieved and he was obviously a very smart horse, but now he’s got to go up against the big boys and it’s an altogether different thing for him. He was a progressive horse last year and everyone’s looking forward to seeing him run, but we’re certainly not afraid to take him on anyways.”

Also on Monday’s card is the Grade Two Wayward Lad Novices’ Chase over two miles, which Nicholls has earmarked at the likely destination for Solo. The five year old was a scintillating winner of the Grade Two Adonis Juvenile Hurdle here in February 2020 and although he’s yet to win in two starts over the bigger obstacles, Nicholls is pleased with what he’s seen so far from his charge.

He said: “I think there is more to come from him, he’s in on Sunday and Monday but I’d say the Wayward Lad Novices’ Chase is going to cut up and I’d dare say we’ll run him in that.

“He needs to improve on all known form but I think he likes going right-handed and the more rain there is the better. It’s going to be a small field and you take your chance in those kind of races.”

Meanwhile, Racing Director and Clerk of the Course at Kempton Barney Clifford provided the following update on the going at the racecourse. He said: “We had a minus four here last night, which was a big swing in temperature, but the forecast is to go milder.

“We are forecast anything between 10-15mms of rain from Christmas Eve through to Boxing Day, obviously it’s needed and that will ease the ground.

“I would say you’re probably looking at Good to Soft ground for Boxing Day."