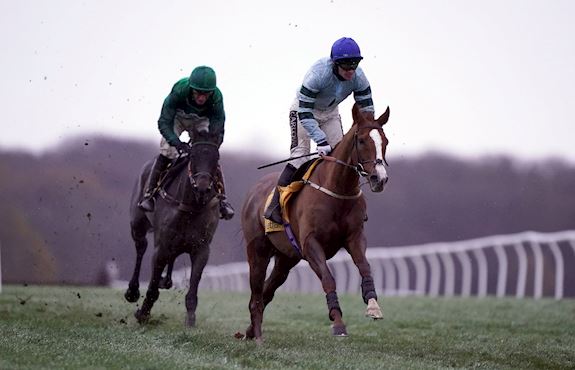 Hughie Morrison is hoping for a “very wet” Christmas Day after admitting that the ground is critical to the chances of victory for Not So Sleepy in the Ladbrokes Christmas Hurdle at Kempton Park on Boxing Day.

The gelded son of Beat Hollow will attempt to add a second top level jumps success to Morrison’s CV in the two mile prize having provided him with his first Grade One triumph when dead heating with Epatante in the Betfair Fighting Fifth Hurdle at Newcastle last month.

With most of Not So Sleepy’s best form coming with plenty of ease in the ground Morrison is praying a deluge of rain hits the track before he takes on his old rival Epatante, who will bid to follow up her victory in the 2019 renewal and become the eighth dual winner of the race.

Morrison said: “It’s the only real option for him now that he has won a Grade One. We are a bit reticent about the ground as we would like plenty of rain but we have what we have got.

“He had a hard race at Newcastle and he has not had that hard a race for a while, but then I think everything did as you saw the third (Sceau Royal) run two weeks later and he didn’t run any sort of race.

“He seems in good order though and we are looking forward to it but I just hope they have a very wet Christmas Day there.

“The ground is far more critical than the track as soft ground just takes a bit of the edge off the other horse’s speed.”

Reflecting on the Fighting Fifth success Morrison believes it justified his previous attempts at trying to claim Grade One glory with the nine year old.

He added: “It was nice to finally tick that box but we have not had too many opportunities to win a Grade One.

“Marble Arch finishing second in the 2002 Champion Hurdle was very exciting but to get that Grade One is a nice addition to the roster. At Cheltenham he was the second best of the British trained horses in the Champion Hurdle when he finished fifth.

“He has probably improved two or three pounds since last spring but he did deserve a win in a race like the Fighting Fifth.

“The nice thing about winning the Fighting Fifth was that it showed that we were not tilting at windmills in those Grade One races.”

Not So Sleepy showed the best of his battling abilities to force a dead heat on his latest outing, but Morrison believes he has possessed such a quality from a young age.

He added: “You go back to his Dee Stakes win at Chester in 2015 and you watch him put his head down that day after he was headed as well.

“He is not stupid as he works out when he can compete. If he can’t compete he just says, “it’s your turn today”.

“He is keen enough in his races but it looks worse than it is as if it was that bad he would never have got home in half of those races.

Although Epatante is odds-on to claim a second success in the race Morrison has full respect for two of Not So Sleepy’s other potential rivals, who will both be attempting to secure a career first Grade One victory.

He said: “Epatante on better ground will be difficult to beat, especially with her mares’ allowance.

“Tritonic is improving though and he is looking back to being the horse that won the Haynes, Hanson and Clark conditions race at Newbury as a two year old judging by his last display at Ascot.

“Soaring Glory disappointed last time at Newbury but he looked very good previously at Ascot and you don’t win a Betfair Hurdle if you are not a good horse.

“We are looking forward to it but if doesn’t turn up for whatever reason and gets beat we will have to take it on the chin.”