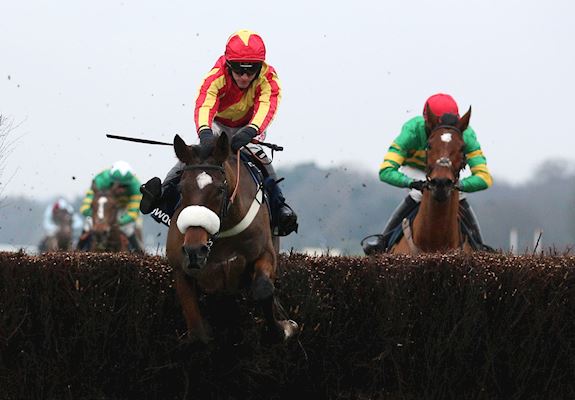 Owner-breeder Wayne Clifford aims to keep his feet firmly on the ground should Annsam continue his progression over fences by passing what he has described will be a true test in The Coral Trophy at Kempton Park on Saturday 26th February, Coral Trophy Day.

Having suffered an unfortunate slip on the Cheltenham turf when celebrating Coole Cody’s win in the Racing Post Gold Cup in December, the enthusiastic 68 year old hopes to avoid the same fate should his homebred land the 3m Grade Three handicap chase.

The Evan Williams-trained seven year old registered the most significant victory of his career last time out when making his second start over 3m a triumphant one in a Listed handicap chase at Ascot just before Christmas.

Although Annsam will need to improve again if he is to defy a 6lbs rise in the weights for his latest success Clifford, who claimed the 2017 renewal of the race with Pilgrims Bay, is confident his rising star can make his mark in The Coral Trophy, which sees its prize money significantly increased to a record £150,000 in 2022 (up from £100,000) thanks to a new partnership between Coral and The Jockey Club.

Annsam is currently 6-1 favourite with the race sponsor for The Coral Trophy.

Clifford said: “I couldn’t believe I was caught on camera at Cheltenham but to be fair it was quite slippery coming up that hill.

“Luckily enough, Kempton is a flat course. It shouldn’t be soft and I’ve not got to go up hill so I should be safe!

“We did have a race at Doncaster a few weeks ago in mind for him but the ground was terrible up there.

“The only thing is that he has had a bit of a gap between this race and Ascot but they all tell me he is flying at home.

“He is a homebred and the win at Ascot last time out was made all the more special because of that.

“He is only seven and I think this will show if he is a true professional as this race looks a real test.

“There are some good looking horses in there and if he could beat some of them I would be very happy.”

While Annsam tasted defeat on his racecourse debut in a juvenile hurdle at Newbury back in December 2018, the Chippenham-based owner-breeder still has vivid recollections of that day.

He said: “I remember the first time we took him to the track as a three year old and seeing him up against all these Flat-bred horses.

“I turned to Evan and said we are running against midgets as he is a monster of a horse. He is a proper chaser and whatever he did hurdling was always going to be a bonus.

“He was always going to want this sort of trip and from what I’ve seen so far from him, I’ve been very impressed.”

Not only has Clifford been taken by the progress shown by Annsam but also from the expert handling he has received from Welsh-based handler Williams.

He said: “Evan plays his cards close to his chest to everyone including his owners but I like that and he is very capable at what he does.

“He is a proper horseman and a proper stockman. He knows what is going on.

“I’ve got six horses down there and he has done fantastic with them. I could not fault him.”

Had it not been for the persistence of his wife Sarah, who he has been married to since 1976, wanting a racehorse more than 25 years ago then all the success Clifford has gone on to enjoy in his distinctive red and yellow silks would never have materialised.

He said: “My uncle used to help staff Bath racecourse and he was there for about 50 years, but it was my wife Sarah who wanted a racehorse. I just refused saying they were too expensive.

“Anyway, I went to work one day and she went to Andy Turnell’s and she came back saying she had a horse and I was like God help me but that is how it all started.

“I believe the horse Bathwick Bobbie, is still around now with Dr Jeremy Naylor and he would now be over 30 years old.”

Although Clifford’s main focus may be on breeding future winners from Byerley Stud, for many years he mixed racing with continuing to expand his tyre fitting company Bathwick Tyers, which he set up in 1978 before selling the company on almost four years ago.

He said: “I set up Bathwick Tyres in 1978 from a lock up garage just like the one you would have at home. I called it Bathwick Tyres as it was located on Bathwick Street, in Bathwick, Bath so it was an easy name to remember!

“Over the years the business just grew and I acquired sites that I thought would be good purchases when they came up.

“In April it will be the fourth year since I sold the company to Micheldever Tyre Services but I still own the sites and lease them back and they have still got the Bathwick Tyres name above the door.

“The customers that came into Bathwick Tyres used to follow the horses whether they were 100-1 chances or odds-on favourites. We had a great following from all walks of life.

“Officially we have run Byerley Stud for four years. Originally it was just a private operation but we now serve customers as well.

“We have got about 30 or more foals for clients and there are about 100 horses here. It is a totally different way of life to the tyre fitting business. It is more relaxing that’s all I will say but we are still getting used to it.”