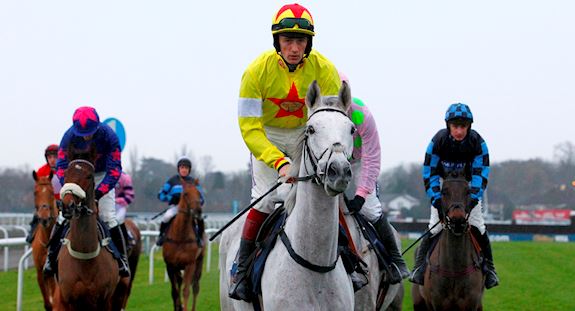 32 entries have been received at the initial entry stage for the William Hill King George VI Chase at Kempton Park on, Saturday, 26th December.  The £200,000 Grade 1 contest, won last year by the Paul Nicholls trained Silviniaco Conti for the second time in the hands of Noel Fehily, has attracted multiple entries from a number of domestic and Irish trainers including Nicky Henderson, Paul Nicholls, Philip Hobbs and Willie Mullins. This year’s contest also includes interest from across the Channel with French trainer J. P. Gallorini entering Shannon Rock and Pindare, whilst his fellow countryman Emmanuel Clayeux has also entered Saint Palois.

This year’s contest is set to be as competitive as ever with it being the first year of the Chase Triple Crown. Jockey Club Racecourses is offering a £1 million bonus if any horse wins The Jockey Club's 3+ mile ‘Chase Triple Crown’ of the Betfair Chase, William Hill King George VI Chase and Betfred Cheltenham Gold Cup during the 2015/16 Jumps season.‎ Paul Nicholls will be going for his 10th win in the race and Silviniaco Conti’s third consecutive win on the day.

Barney Clifford, Regional Head of Racing and Clerk of the Course at Kempton Park Racecourse, said;

“It is fantastic to see such high quality horses entered from the UK, Ireland and France, for which many have had multiple Grade 1 wins. Silviniaco Conti will be challenging to retain his crown for a third time but will have no easy feat with such strength and depth amongst the entries. As the highlight of Kempton Park’s calendar we are looking forward to another brilliant renewal of the 65th running of the William Hill King George VI Chase.”

Paul Nicholls holds the leading trainers record for the William Hill King George VI Chase since its inception in 1937, boasting nine wins, the majority of those wins coming from steeple chase legend Kauto Star.  Ruby Walsh holds the leading jockey position for the race encountering five victories since 2006. Walsh was another beneficiary of Kauto Star’s dominance in the race, the pair won five out of the six renewals between 2006 and 2011. Silviniaco Conti spearheads the Nicholls entries this year, Nicholls also enters Pitt Zig, Southfield Theatre and Saphir Du Rheu.  Ruby Walsh looks set to team up with Willie Mullins superstar Vautour. Early Ante-post Favourite Vautour was a brilliant winner of the JLT Novices' Chase for the all-conquering Willie Mullins-Ruby Walsh team, when last seen at the Cheltenham Festival in March.

Other than Vautour, Willie Mullins has four entries including RSA Chase winner Don Poli, last season’s Cheltenham Gold Cup runner up Djakadam and Valseur Lido who won her last start in the Growise Champion Novice Chase (Grade 1) on the second day of the Punchestown Festival over in Ireland.  Nicky Henderson has two contenders currently entered in the race, Ma Filleule who won the William Hill - Bet on the Move Handicap Chase at the Winter Festival in 2013 and was second in the Ryanair Chase at the Cheltenham Festival last year. Also entered for Nicky Henderson is Simonsig. The Multiple grade 1 winner has lost just one of his nine starts under rules but has not been seen since winning the Arkle Chase at the Cheltenham Festival in 2013, after missing the whole of last season through injury.  Phillip Hobbs has entered seasoned veterans Captain Chris and Menorah. Captain Chris, who would be running in his third King George, was only beaten a neck by Long Run in 2012 and was last seen winning the Ascot Chase early last year. Menorah would also be running in his third King George, the 10 year old has had limited success in the race in his last two attempts being pulled up in 2013 and finishing eighth last year.

Gordon Elliot will be hoping to win his first William Hill King George VI Chase. The Irish based trainer has entered Don Cossack and Clarcam. Don Cossack has made a mighty impressive start to the season, winning the Grade 1 JNwine.com Champion Chase by eight lengths. The eight year old has won his last three grade 1 races. The two other Irish entries come from Noel Meade’s yard. Apache Stronghold finished second behind Vautour in the JLT Chase at the Cheltenham Festival in his only start outside of Ireland. Whilst Road to Riches is a multiple Grade 1 winner and took home last year’s Lexus Chase at Leopardstown.