Henderson confident Might Bite can be Christmas King again at Kempton 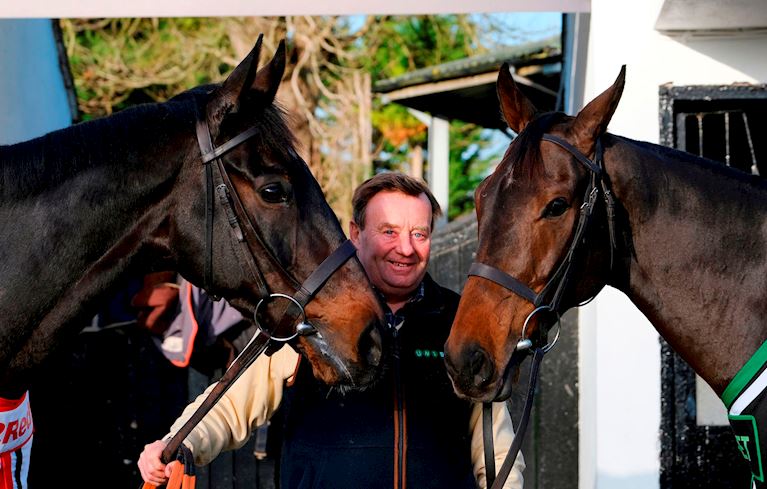 Nicky Henderson believes his star staying chaser Might Bite was “flummoxed” when finishing last in the Betfair Chase at Haydock but he remains confident of his ability to bounce back in the 32Red King George VI Steeple Chase at Kempton Park on Boxing Day.

Speaking at the launch of the 32Red Winter Festival at The Pheasant Inn in Lambourn, he said: “He didn’t enjoy Haydock very much. There was a very good picture of him jumping the second fence which was the biggest one on the track. It flummoxed him. The picture shows he wasn’t jumping and he just landed on the top of it.”

Henderson continued: “He lost all rhythm and when you saw him around Kempton and Cheltenham the whole thing flowed. He never got into a rhythm at Haydock and it is a different track these days. I’m not blaming that - he should have done it, but he didn’t. Bristol De Mai was the one horse that jumped really well and he deserved to win.”

“We schooled him last Thursday and I spoke to Yogi (Breisner) and he agreed with me that he seemed to lose his rhythm. He will school again this week but he doesn’t need any remedial schooling – he just wants to get his confidence back a bit.”

Meanwhile Henderson’s other star chaser, Altior is “very unlikely” to join Might Bite in the race.

“We sat down after racing on Saturday as I knew on Sunday morning I was going to bombarded with ‘will he or won’t he’ questions about the King George," Henderson said.

“I know Pat (owner) was very keen and she is braver than me, but I’m not for it and I think it is very unlikely. He won the Tingle Creek well but in that ground I can’t believe he didn’t have a hard race. When Un De Sceaux is burning it up on heavy ground you know you are going some gallop.”

“I just think trying to go three miles at this stage would be the wrong moment.”

The Jockey Club Chase Triple Crown can only be won by one horse and that is the Nigel Twiston-Davies trained Bristol De Mai who won the Betfair Chase for a second year running at Haydock.

“He’s in the form of his life,” said Twiston-Davies. “I couldn’t be happier with him since his win at Haydock. He proved at Haydock that he is not ground dependent.

The Jockey Club Chase Triple Crown, offers a £1 million bonus to any horse who can win at Haydock, the King George at Kempton and the Cheltenham Gold Cup in the same season.

Twiston-Davies added: “At the beginning of the season you want to win big races and it would be a huge bonus if we do pick up the three, but it has been proved that it is very difficult to do.

“He made a very bad mistake going away from the stands in the King George last year and that knocked him out of the race really. He was beaten just over 20 lengths, so hopefully he will be 20 lengths better this year.”

Recent Grade 2 winner, Politologue, will spearhead the Paul Nicholls’ team having had his form boosted by Charbel on Sunday at Huntingdon and the race’s most successful trainer will also have Clan Des Obeaux in the race.

Politologue will be tackling the three-mile distance for the first time, but Nicholls is confident that the extra distance will suit him. He said: “He has never run over three miles, but he has won over two-mile-five twice at Ascot.

“He likes going right-handed, he’s good on flat tracks and his form is red-hot now the horse he beat at Ascot (Charbel) won well in the Peterborough Chase at Huntingdon on Sunday. He is bred to stay. The other day at Ascot he travelled supremely well and I don’t see the trip being a problem.”

On his other 32Red King George VI Challenger, Clan Des Obeaux, he said “I was thrilled with Clan Des Obeaux at Haydock as at the weights he had no chance. He will be slightly better going right-handed as he just jumps out to his right a fraction. He has run well at Kempton before.”

“I just thought the way he ran the other day he can only improve – he has to, but not massively. It is exciting to have two nice horses to run in the race.”