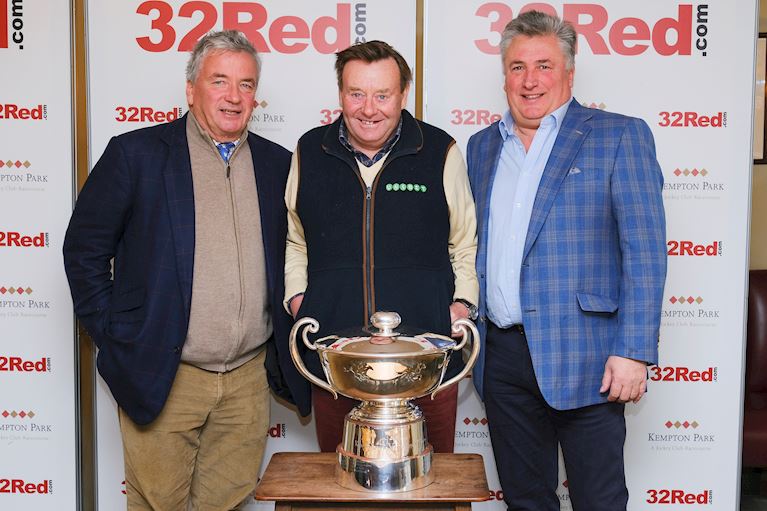 Paul Nicholls is confident that his recent Grade 2 winner Politologue, will handle the extra distance in the 32Red King George VI Steeple Chase at Kempton Park on Boxing Day. Politologue will spearhead the Paul Nicholls’ team, with the race’s most successful trainer also running Clan Des Obeaux in the race.

Speaking at the launch of the 32Red Winter Festival at The Pheasant Inn in Lambourn, Nicholls commented following Politologue’s Ascot run:

“Very pleased with him, straight back cantering. It didn’t take too much out of him at all and he is back in full work.

“He stayed on really strongly that day, obviously the form is good, he gave 6lbs when beating Charbel. That form is rock solid the way that Charbel won at Huntingdon.

“He stayed on strongly, travelled well into the race, idled a bit in front and galloped all the way from the back of the last to the line. If he didn’t stay he wouldn’t have won the race.

“He has just never been over 3 miles that’s just the way it has worked out, but he has won over two miles five furlongs and two miles three furlongs, he will be fine I am sure he will.”

“Though he won the Tingle Creek last year, Altior wasn’t there and one or two others so it probably wasn’t quite as hot as it might have been and then we stepped up in trip at Aintree. Obviously two miles was too sharp for him at Cheltenham, he was much more impressive over two and half miles and he is bred to stay. We always thought he was going to be a stayer, it’s just he is not short of pace and he has done well up to now.

“Kauto Star - who won 5 King Georges - had the same sort of profile to run in Haldon Gold Cups and over two and half at Ascot and things like that and ended up getting three, so I am hoping he will.

“There are a lot of things in his favour really. The flat track suits him, right handed suits him and I am really sure the race will suit him. He is high class. None of us know if he will quite get the last bit of the trip but I don’t think it is an issue really.”

Nicholls also commented on other contenders in the race and ground conditions:

“That was very good race (Betfair chase), obviously Might Bite has got to improve but I think he just got a little bit tired. I think he will improve. Those were the best horses - you have got the Gold Cup winner, the King George winner and Bristol De Mai is very, very smart on his day. That form probably stands out, but I have always said different track, different day, you often get a different result. They are all smart horses that will all be in the mix.

“Good to soft would be perfect at Kempton, but unless it is an absolute bog I wouldn’t be too worried about it really.”

Regarding jockeys for his runners, Nicholls said:

“I suspect Sam Twiston-Davies will ride him (Politologue) and Harry Cobden will ride Clan Des Obeaux. That would be the obvious thing to do. I know Harry is very sweet on Clan, Sam is obviously sweet on Politologue, both of them have won on both horses but I suspect we will leave it at that.”

On his other 32Red King George VI Challenger, Clan Des Obeaux, he said:

“He ran well, he is a very inexperienced horse, progressing. If it had been a handicap he would have got an awful lot of weight off the others, which probably begs the issue that I should have run him in the Ladbrokes Trophy as it turns out!

“He ran very, very well - he would have learnt a lot. He jumps slightly right handed, so Kempton will probably suit him better than Haydock. That puts him right in the mix. He wasn’t beaten far by Thistlecrack or Native River, so the form is good. If he can just improve, we will be in with a shout.

“He is only six years old and they can just keep on improving. We have had to mind him and I am really looking forward to letting him go.”