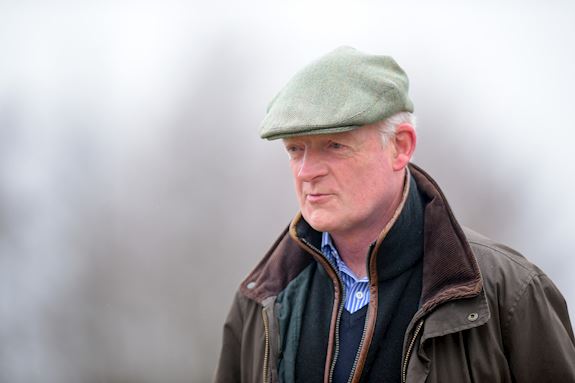 Willie Mullins is planning to send a runner to Market Rasen for only the second time in his 34-year training career this Saturday (January 16th) for the Listed Alan Swinbank Mares' Standard Open National Hunt Flat Race.

The 14-times Irish Champion Trainer watched his exciting five-year-old mare, Grangee, win a two-mile ‘bumper’ at Galway in October, ridden by son Patrick Mullins, and she will now bid to emulate the success of Mullins’ only previous runner at the Lincolnshire track, Panic Attack, who won this same race last year.

Panic Attack took the spoils in emphatic style that day and subsequently joined David Pipe, for whom she ran in the Weatherbys Champion Bumper at the Cheltenham Festival last March and has since won two hurdles races.

Patrick Mullins, jockey and Assistant Trainer to Willie Mullins, said: “Grangee is very petite and we were worried about the soft ground at Galway, which is a tough track, but she handled it very well. She surprised us with how impressive she was in a very strongly-run race, so Willie nominated her for the Champion Bumper at the Cheltenham Festival afterwards.

“We thought this race at Market Rasen would be a nice stepping stone on the way. Market Rasen is very different to Galway, but we have no reason to think that it won’t suit her.

“Panic Attack was very good in the race last year and these Listed Mares’ bumpers are very valuable for owners and breeders looking to get some Black Type, so we’re always on the lookout for those races in England. Everyone who was at Market Rasen last year was very complimentary about how it all went.”

The Listed Alan Swinbank Mares' Standard Open National Hunt Flat Race is one of three races at Market Rasen which will be broadcast live on ITV4, with the MansionBet Handicap Hurdle and MansionBet’s Bet 10 Get 20 Hurdle also included in their Saturday afternoon coverage.

The races form part of a seven-race card at Market Rasen, which also features a Novices’ Hurdle and two handicap chases which bookend the day. Entries for Saturday’s fixture total 135.

The feature race is named after Alan Swinbank, a successful dual-purpose trainer who sent out nearly 800 winners from his North-Yorkshire yard, most notably the globe-trotting multiple Group 1 winner Collier Hill.

The Alan Swinbank Mares Listed National Hunt Flat Race was first run in 2018 and was named in his honour after his death in 2017 at the age of 72. The trainer saddled 25 winners at Market Rasen, with a 27 per cent strike rate at the course. His partner Sally Haynes took over the training licence for the yard and had her first winner, Brecon Hill, in a Market Rasen bumper four days after his passing.

Nadia Powell, Market Rasen’s General Manager, said: “We are really pleased with the entries for Saturday’s card, both in number and quality. The Alan Swinbank Mares' Standard Open National Hunt Flat Race has been very well supported once again and it is fantastic that Willie Mullins is targeting the race for the second time.

“The MansionBet’s Bet 10 Get 20 Hurdle features some very high-class horses, such as Lil Rockerfeller, who has been to all the major festivals and is hugely popular, as well as Vision Des Flos, Mohaayed and On The Blind Side.

“It is great to have the ITV cameras here and broadcasting three of our races on terrestrial television, as well as having the fantastic support of MansionBet, who sponsor six of the seven races.”

Market Rasen’s fixture will be staged behind closed doors without racegoers present due to ongoing COVID-19 restrictions. However, every race can be watched live on Racing TV and then free and in full just 20 minutes after the conclusion of each race at thejockeyclub.co.uk/the-racing/race-replays/.