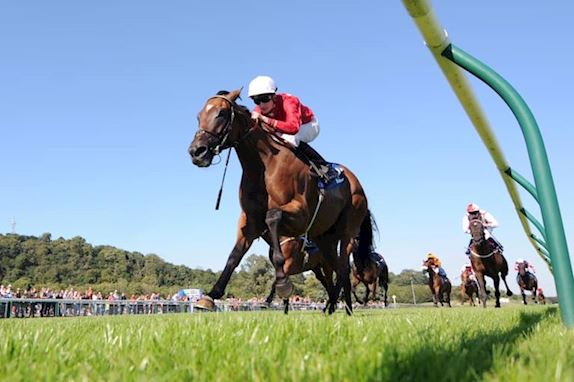 5 things we learned at Nottingham

With the Jumps season now over it’s all systems go on the Flat and Nottingham Racecourse staged an entertaining card which included the Listed Nottinghamshire Oaks.

We’ll forgive you for doing a double take when we told you it was Nottinghamshire Oaks Day.

The feature race over 10 furlongs generally produces some smart fillies and mares and was being run for the first time in its new slot in late April today.

And it looks worth keeping an eye on La Lune, who showed a nice turn of foot to hit the front in the closing stages under David Probert, before gamely holding off the attentions of the Mark Johnston-trained Freyja to prevail in a photo finish.

It was La Lune’s first victory at Listed level and Henry Candy was thrilled with the five year old, who he feels will be worth her place at Group level this season.

Speaking after the race, he said: “She’s a superstar. She’s got a huge heart and a huge stride and she absolutely loves it.

“She got a mile and a half at Pontefract, so I just wondered over 10 furlongs here when they went so slow early on whether it would play against her, but she quickened up really well. She lost her way a little bit last year like an awful lot of mine, but she’s really come back into herself.

“She was always going to race on this year and she might finish halfway through the year, possibly, but she’s got the most wonderful attitude. It was very much today and see with her but I think she just needed that and we might even have a look at a Group 3 race next time.”

If you follow football you’ll know that Kia Joorabchian has overseen his fair share of shrewd signings through the years.

Currently more famous for representing the likes of superstar footballer Carlos Tevez than he is for anything connected with horseracing, that might be about to change.

The hugely successful football agent has dipped more than just a toe into racing and under the name Amo Racing Limited now owns a string of more than 80 horses in training.

One of them, Sir Rumi was a particularly game winner of the Racing TV Profits Returned To Racing Novice Stakes here at Nottingham and, having made a pleasing debut at the bet365 Craven Meeting earlier this month, looks destined for a nice future.

Rossa Ryan, the retained rider for the Amo Racing operation, was pleased with what he saw from the colt. He said: “He has a nice attitude. I thought pulling up that I may have kicked him too soon, but he’s a horse that will probably see a mile and a half in the future.

“Ryan (Moore) kicked on Sun Festival from two out and I was just rolling with him and we got a bit lonely (as Sun Festival weakened) but he’s been really game. We have 85 horses in training and of them I think 50 are two year olds, so we’ve a lot of nice exciting horses and I’m really looking forward to getting the season properly underway.”

The quirky nature of the Flat season means that we have to wait until QIPCO 2000 Guineas day at Newmarket on Saturday before the Flat Jockey’s Championship gets underway and it looks set to be a hugely exciting race for the crown.

Reigning champion Oisin Murphy is the current 7-4 favourite to retain his crown but you can make a strong case for at least four jockeys - if not more - in opposition, including Ben Curtis.

Curtis racked up a hugely impressive 170 winners during 2020 and plenty fancy him to make a bold bid for this year’s title, having been in the frame for each of the last few seasons.

And while Curtis wouldn’t be drawn into talking up his title chances too much, he was amongst the winners on Tuesday courtesy of the Mark Johnston-trained Hochfeld, who showed a good attitude to hold off the attentions of the even money favourite Lostwithiel.

He said: “He’s very straightforward and travels along lovely. I picked it up early enough in the straight because I knew he’d be a stout stayer and he stuck his head down well and ran well through the line.

“Lostwithiel went past me late on but my lad stays very well and I was confident enough going into the last furlong that we’d make him work for it and to be fair the horse has pulled away at the end, so a very good performance.”

When asked about the jockey’s title, he added: “Everyone will be going for it and I’ve said to my agent we’ll be giving it a kick. We’ll be there as long as we can and if you can get to Goodwood you know where you are but I’ll do the same as I do every year and ride as many winners as possible.”

EVANS COULD HAVE A FAB PROSPECT ON HIS HANDS

The opening race on the card was the Watch On Racing TV Fillies' Novice Stakes over five furlongs, which featured a mixture of debutants and runners with experience.

It was those with previous form under their belts who came to the fore in the closing stages and it was difficult not to be impressed with the David Evans-trained Fabiosa, who showed plenty of professionalism to overcome the well-fancied Amber Dew in the closing stages.

The daughter of Havana Gold knew her job well on the day and jockey James Doyle felt that she could prove to be a nice filly. He said: “It was a nice performance and I’m very pleased with her. She ran a good race on debut and looked to improve a lot for that experience here.

“Speaking to Dave (Evans) beforehand, he was pretty positive and thought she’d go very close, so that was very nice. You’d hope there’s a nice race in her at some point. The second horse (Amber Dew) has come out of a very nice race at Newmarket that’s thrown up a couple of winners, so we’re very pleased.”

DOYLE PLEASED WITH HIS ROMAN CONQUEROR

It proved to be a very good afternoon indeed for James Doyle, who notched up a double on the card when teaming up to good effect with Roman Mist in the Follow @racingtv On Twitter Fillies' Handicap.

The three year old was made to work for it when hitting the front at the furlong pole, but she showed plenty of resolve to keep her nose in front as three challengers queued up to have a go in behind her.

And Doyle was pleased with his charge, who picked up her first success at the eighth attempt. He said: “She had to be tough at the finish and it’s surprising that she hasn’t won until today as her form’s been pretty solid and she’s very consistent.

“We felt all of the conditions were ideal and the race went just as we’d hoped really and she hit the line really well. It was a desperate late on and they all queued up to have a crack at her but she was very willing.”